Listen to this 14-min speech.
In June, Ghana President Nana Akufo-Addo basically outlined what is now happening in October, and confirms the Ottawa World Lockdown Leak posted here.   This pandemic, which is designed to destroy the world economy. was planned years ago down to the last detail. Remember "The Great Depression"? Think that was an accident? They create economic crises to advance political goals. We have been fast-tracked for tyranny.
by Henry Makow PhD
(henrymakow.com)
On June 21, Ghana President Nana Akufo-Addo went public with the plan to destroy the world economy and enslave mankind. He said he was reading from a 2010 Rockefeller Foundation document but it must have been another Rockefeller "Operation Lockstep" document. (Can a reader help me identify his source?)
Nevertheless, beginning on page 18, the aforementioned RF document describes the Operation Lockstep scenario in some detail: "A world of tighter top-down government control and more authoritarian leadership, with limited innovation and growing citizen pushback."
Remember this scenario is from 2010: "Even the most pandemic-prepared nations were quickly overwhelmed when the virus streaked around the world, infecting nearly 20 percent of the global population and killing 8 million in just seven months, the majority of them healthy young adults. The pandemic also had a deadly effect on economies: international mobility of both people and goods screeched to a halt, debilitating industries like tourism and breaking global supply chains. Even locally, normally bustling shops and office buildings sat empty for months, devoid of both employees and customers."
Here is a brief outline of Akuufo-Addo's main points which confirm our worst fears.  This pandemic was planned ten years ago down to the last detail.
1. Create a low mortality virus at Fort Detrick, NJ.
2. Create a weaponized high-mortality version as a backup to be used if needed.
3. For "added deniability" have it transferred to the bioweapon lab in Winnipeg where it will be stolen by Chinese scientists and smuggled out to Wuhan.
4. Make its spread seem like an accident. Blame the wet market in Wuhan.
5.  Do a real-world simulation in Oct 2019. This is Event 201.
6. Plan to vaccinate the human race, enforced by a digital ID and "heath passports." (This is ID 2020.)
7. Allow human to human contact to enable the strain to spread before lockdowns begin.
8. Expand lockdowns.
9. "Hype" the number of deaths in order to spread fear. Attribute all deaths to Covid 19.
10. Keep lockdowns as long as possible in order to destroy the economy, break supply chains and create social disruption.
11. Relieve lockdowns for a short time, and then blame "increase" in cases on this respite. Blame increase on protesters. "We told you so." 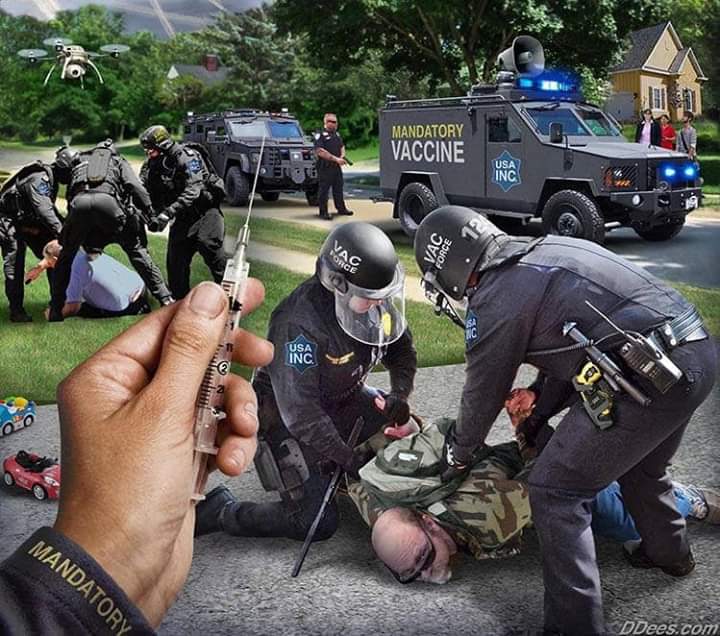 12.  Quell outrage with brutal force and depict dissenters as "public enemies." Army checkpoints.
13. Roll out vaccinations and passports. People will not be able to participate in society without both.
14. If the majority wakes up to this conspiracy, release a new virus with a 30% mortality rate and say, "We told you so."
I urge you to listen to the video. It may be the most important 14 minutes of your life.
Related- Grace Van Berkum - We are Being Played                                        --------2010 Operation Lockstep Coming to Life
BBC Tries to Discredit this Report
Rockefeller 2010 Report Envisions Police State
Plandemic 201 Highlight Reel
First Comment from Tony B
If you have the means to quickly move to Mexico or South America, I suggest you do it - now!
This destruction of life as God intended it is NOT a test or trial, this is the end game for those satanic Talmudists and their myrmidons who have planned for centuries to have this world for themselves alone.  They have not been coy about all of it, saying publicly for decades now that they wish to reduce the world's population by 85% to 95%.  That means, with today's technology, they feel that they only need a percentage of between 5% - 15% of those of us living today as their abject slaves.
The rest of us they intend to kill, the mass slaughters of the soviet and red China were the test, this time their plot is actually to murder most of the world.  If that sounds too insane to believe, yes it is insanity at its most satanically twisted, but you had better believe it and act upon it if you expect any chance whatsoever of you or your family's survival.  This insanity has been proven over and over through the centuries to care not about ANY LIVES, your women and children will NOT be excepted.
It really seems that the English speaking populations, as well as the Europeans in general, are too far down the tube of constant satanic brainwashing and pagan living to defend themselves and their families, a better stand will be made in South American or Africa.  Or possibly, as Paquita de Shishmareff (L. Fry authoress of "Waters Flowing Eastward") used to tell me, Russia's Siberia may be the last stand of the white man.

I am so utterly sick of this continuous COVID b.s. The COVID numbers are all based on the PCR test.

Do a search on any major search engine, using "90 percent of pcr tests give false positives"

I think the voice in the audio is not President Nana Akufo-Addo. Compare the voice to the video linked below. I don't know who is in the audio you haveâ€“â€“ and I'm not saying his information is true or not, but he is not the President of Ghana.