Brabantian- Does Nashville Bombing Signal a CIA vs NSA War? 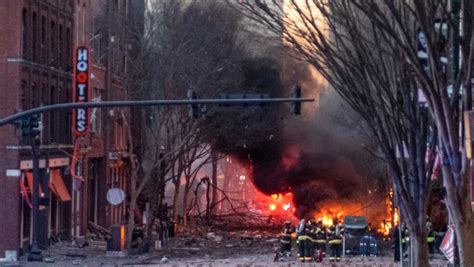 The Nashville bombing Christmas day, where a recreational vehicle exploded after giving an evacuation warning, points to a possible violent civil war emerging between factions of the US government itself, linked to the Trump-Biden election controversy.

Brabantian's Nashville update - "Classic gov operations scenario continues, with alleged 'terrorist', as so often the case, said to be quickly dead so no one can talk to him ... age 63 boomer Anthony Quinn Warner supposedly 'radicalised' by articles on the dangers of 5G and ready to kill himself over this ... but clever enough to wreck 41 buildings and knock out communications across multiple states of the USA ... perhaps a 'manifesto' is in the postal mail, soon to surface ..."

The Christmas Day bombing clearly targeted a building of telecommunications giant AT&T whose Nashville facilities are also believed to serve a major outpost of the US NSA National Security Agency there. The NSA has long been in rivalry with the CIA, and they are likely now on opposing sides in the Trump vs Biden election fraud controversy.

As result of the bombing itself, or related sabotage hidden from the public, a major telecommunications collapse occurred, extending through several states, shutting down flights, and touching some US military installations. 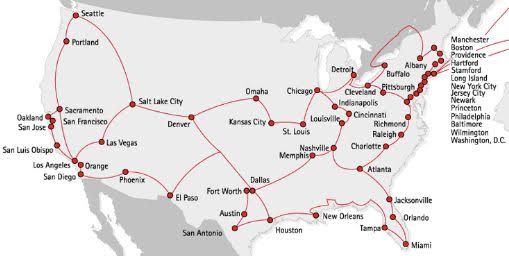 Nashville is in fact a key switching node in USA communications infrastructure for the whole eastern USA, as diagrammed in this map.
AT&T dates back to 1885 and was for decades a US-government-linked telephone monopoly. Even after USA telecom break-up, AT&T remains a powerhouse, with a close association with the NSA and phone and internet surveillance:
https://techcrunch.com/2018/06/25/nsa-att-intercept-surveillance/
AT&T is said to have been ready to audit suspected US voting machines, questioning the election of Joe Biden and Kamala Harris, who are backed by George Soros, partner in creating 'colour revolutions' along with the CIA for decades. The CIA-NSA rivalry runs very deep, and the blast on Christmas morning perhaps signalled that this war has now gone 'hot'. Its staging, with sounds of gunfire to draw police and a recording playing warning to evacuate the area before a huge explosion, seems professional.
NSA VS CIA-- ASSANGE & SNOWDEN
The NSA budget is much bigger than the CIA's, and the half-hidden NSA sees itself as more sophisticated, whilst the CIA is forever under public fire for all the evidence of crude fraud in its many 'regime change' and propaganda operations. One area of the rivalry is Julian Assange and Edward Snowden, whom I have long argued are frauds and psy-ops, starting with how they were both promoted by CIA-tied media:
https://www.henrymakow.com/2018/11/assange-snowden-rat-traps.html
Like his friend Assange, Snowden opposes 9-11 truth, covering for a CIA operation; whilst Snowden and his Rothschild friend Greenwald bash NSA surveillance, media-hyping the 'spying on us' which was long known. 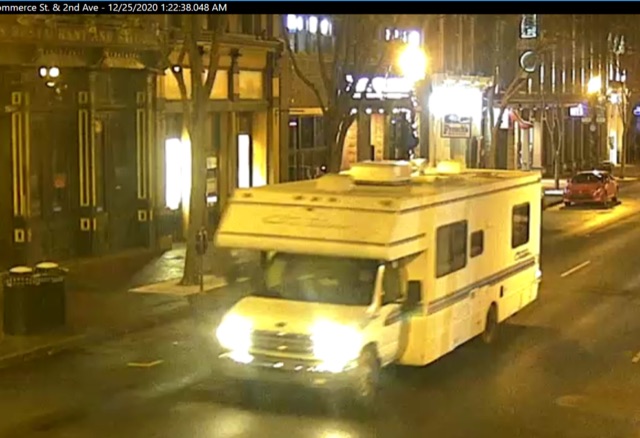 (Explosive-laden RV)
This ties in to the Nashville bombing, with the CIA apparently angry that Trump has not pardoned these apparent CIA fakers, despite how the CIA-Soros apparatus seems knee-deep in USA election fraud.
The CIA-NSA battle reflects a wide split overall in US law enforcement, with most police and sheriffs and US Marshals, much of Homeland Security, and many rank-and-file military, all horrified at this last year of riots running wild, police being unfairly charged with murder, and George-Soros-funded prosecutors letting criminals out into the streets to advance the Bolshevik agenda of societal collapse ... and now the election fraud to push this agenda further under Biden-Harris.
SPOOKY ASPECTS; LINK TO MELANIA TRUMP VIDEO
Initial bombing reports spoke of ill persons and choking firefighters, and radioactivity being gauged, suggesting a nuclear-material 'dirty bomb'. Six months earlier, on 22 June, the Nashville Tennessean newspaper had published a right-wing prediction of an 'Islamic nuclear attack' in Nashville
https://www.independent.co.uk/news/world/americas/tennessee-newspaper-islam-advert-nuclear-bomb-nashville-a9578686.html
Nashville's Democratic Mayor John Cooper couldn't hold himself back from laughing about this bombing damaging at least 41 buildings and injuring three, with tissue from a human body found as well
https://twitter.com/MillerStream/status/1342553021520101376
The blast seems to have been signalled in advance, on that ultimate outpost of both leakers and government agents, 4chan /pol/, in a thread archived here
https://archive.4plebs.org/pol/thread/298418759 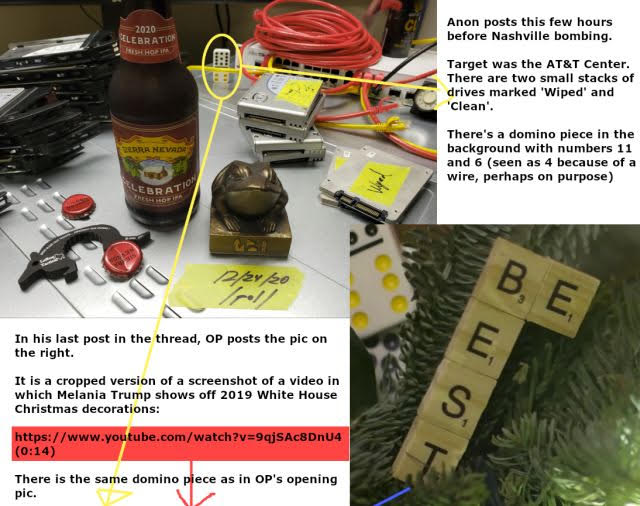 A photo you see here began the 4chan thread, with the poster later adding a screenshot from Melania Trump's December 2019 Christmas video, at the 14 second mark
https://www.youtube.com/watch?v=9qjSAc8DnU4&t=0m14s
Both photos include the same 11-6 domino game piece, the main photo having a number of computer drives which are marked 'wiped', hinting at either or both of electronic election fraud and the destruction of AT&T-NSA data.
The bombing may be in part a warning as to how easily and quickly much of the USA communications grid could be taken down. It comes as well in a crucial time in the election fraud controversy, where a new move is being discussed, with US Vice President Mike Pence perhaps to save the Republic. 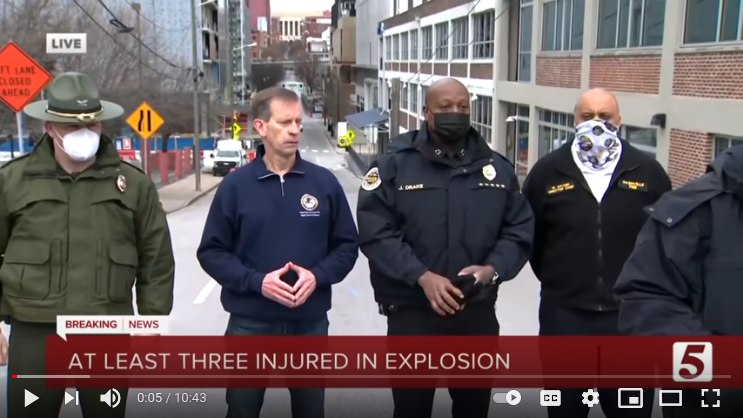 (Masonic hand sign)
It is argued that when Pence supervises elector count in Congress on 6 January, he is duty-bound by the Constitution to reject electoral vote slates designated through fraud, which Pence is fully informed of by the NSA intel briefings. Seven states have sent twin duelling slates, one for Trump, one for Biden. Per the Constitution, electoral vote controversy is to be settled by the Congress House, voting in blocs by state, so Trump wins. Listen to Mike Pence here ... he seems on fire, and ready to act to save the USA:
https://twitter.com/FuctupMike/status/1341548817611706370
What comes next can't be predicted. There may be more violence, or just secret high-level discussions. Perhaps some patsies were hired for the initial bombing, not knowing they were pawns.
Blame could fall on Muslims, on Iranian Kurds who live in Nashville, on right-wingers, or on left-wingers whom Biden & Harris want to crush. We may not know for a while ... but it is one remarkable time in the USA. Godspeed to the forces of good, and may they have the divine power behind them to triumph.

Nashville explosion was actually a missile strike, and the target was the AT&T / NSA hardened switching facility "spy hub"

Comments for "Brabantian- Does Nashville Bombing Signal a CIA vs NSA War?"

May I cautiously hope?

Without impinging his argument, we are dealing with agencies that have been unaccountable since 1947, have Black Budgets very likely larger than the GDP's of some nations, and have been protecting nothing but their own secrecy and crimes since most of the world's population has been alive.

What joy if they blow each other to Kingdom come. What freedom might the world know if the last CIA agent is strangled with the innards of the last NSA agent.

If there had been no hope at all for 2021 you have provided some. Bless Brabantian for that. And thanks a bundle for sharing it, Henry -- Happy New Year!