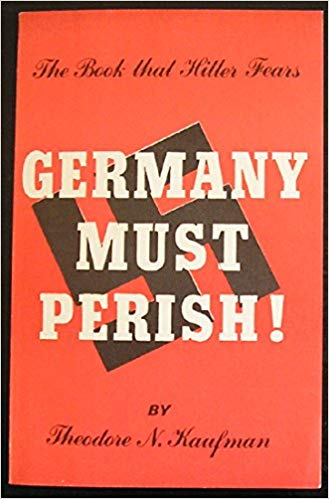 "Germans are a subhuman pestilence." The Nazis took this guide to German genocide by a Jew and changed the title.
For millions of Jews, Nazi-occupied Europe in 1941 was a house filling with gas fumes.
Why would an American Jew toss in a lighted match by advocating the sterilization & extermination of Germans? This was before the Jewish holocaust began; America wasn't even in the war.
Supposedly a loner, Theodore Kaufman probably had wealthy backers.
His book was advertised in major newspapers. Moreover, although self-published, the book received favorable reviews in the MSM, which is unusual.
Kaufman had a Messianic vision of a "peaceful" World-Government run by Jews.
He implied that Germans were rivals to Jews in the field of world domination. The mass murder ("burnt sacrifice") of assimilated Jews was necessary to establish the NWO with Israel as the capital.
His book was a psyop that advanced this agenda.
"I believe that the Jews have a mission in life. They must see to it that the nations of the world get together in one vast federation."
-- Theodore Kaufman
Compiled  from Amazon Reviews  and Wikipedia
from March 5, 2019
by Henry Makow PhD
According to  David Irving, Germany Must Perish!, a self-published book (July 1941) by Theodore N. Kaufman, prompted Goebbels to begin deportations of Berlin Jews to the Baltic countries where they were being slaughtered by the locals, (in revenge for Communist atrocities.)
(1.15 min ff)
Theodore Kaufman, (1911-1986) owned a small advertising agency in New Jersey. There were about 350,000 Jews still in Germany and millions more in occupied Europe.
What would prompt a fellow Jew to place them in mortal jeopardy by advocating the sterilization of all German men under 65 and women under 45?
Kaufman wrote: "Concerning the males subject to sterilization: the army groups, as organized units, would be the easiest and quickest to deal with. Taking 20,000 surgeons as an arbitrary number and on the assumption that each will perform a minimum of 25 operations daily, it would take no more than one month, at the maximum, to complete their sterilization ... The balance of the male civilian population of Germany could be treated within three months. Inasmuch as sterilization of women needs somewhat more time, it may be computed that the entire female population of Germany could be sterilized within a period of three years or less." --- p.88
The back page cites the following endorsements: "A Plan For Permanent Peace Among Civilized Nations" -- New York Times; "A Sensational Idea" -- Time Magazine; "A Provocative Theory - Interestingly Presented" -- Washington Post.
Advertisements in the New York Times and New York Post described the book as: "A dynamic volume outlining a plan for the extinction of Germany and containing a map showing possible dissection and apportionment of its territory."  The book accuses Germans of everything Jews are accused of -- text here. 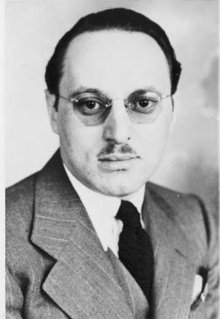 (Theodore Kaufman. Did this man inspire the Holocaust?)
In an interview carried in the September 26, 1941, issue of The Canadian Jewish Chronicle, Kaufman defended his proposal:  "I believe that the Jews have a mission in life. They must see to it that the nations of the world get together in one vast federation... Slowly but surely the world will develop into a paradise. We will have perpetual peace. And the Jews will do the most to bring about this confederation because they have the most to gain. But how can you get peace if Germany exists? The only way to win an eternal peace is to make the punishment of waging war more horrible than war itself. Human beings are penalized for murder, aren't they? Well, Germany starts all the wars of magnitude. Let us sterilize all Germans and wars of world domination will come to an end!"
NAZI REACTION
In "Last Train From Berlin" (1942) the late Howard K. Smith wrote that the Nazis were overjoyed by this propaganda windfall. According to Smith, at first, the Nazis merely sold Kaufman's pamphlet cheaply but eventually distributed a copy to every German family with their ration card. Kaufman's book gave the Nazis a propaganda windfall and even another excuse for eliminating the Jews of Germany.
"No man has ever done so irresponsible a disservice to the cause his nation is fighting and suffering for than Kaufman," Smith wrote. "His half-baked brochure provided the Nazis with one of the best light artillery pieces they have, for, used as the Nazis used it, it served to bolster up that terror which forces Germans who dislike the Nazis to support, fight and die to keep Nazism alive ..." 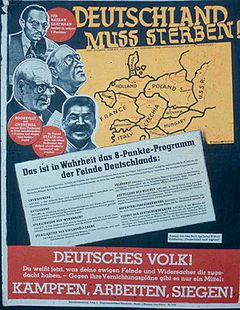 The Berlin daily newspaper Der Angriff of July 23, 1941, proclaimed: "Diabolical Plan for the Extermination of the German People" and that Kaufman's was a work of "Old Testament Hatred." Extracts from the book appeared in the nationally-circulated weekly newspaper Das Reich, August 3, 1941.
The leaflet at left presents a reproduction of Kaufman's "8-Point Plan", and is then captioned: "German People! You now know what your eternal enemies plan to do. To stop their extermination-plan, there is only one thing to do: FIGHT, WORK, WIN!"
Pointing to Kaufman's writing, the Nazi message to the German people was a simple one: get them before they get you.
In September 1941, Julius Streicher published an essay in Der Sturmer that called Kaufman's book "the crazy thinking of [an] insane Jewish brain". He quoted Kaufman at length and then commented: "By destroying the German people, the Jew wants to stop up the spring from which, since the beginning, the world has always found its creative blood, the source of all that is beautiful, good and noble."
After the US entered World War II, Adolf Hitler claimed mass sterilization of German male youth was a "primary" American goal:
"The Jewish president of the American Federation of Peace is no anonymous individual, no fanatic rejected by world Jewry, no mentally ill crackpot, but rather a leading and widely known Jewish personality in the United States. He belongs to the so-called Roosevelt Brain Trust, which provides intellectual and political education and advice to the American President. "It is therefore beyond question that his book and its demand that 'Germany must perish' corresponds to the official opinion of the leading circles of world plutocracy."
When the Jews of Hanover were evicted on September 8, 1941, the local authorities cited Kaufman's book. Kaufman responded: "This is just a flimsy pretext for another of the innate cruelties of the German people ... I don't think it was my book that prompted this barbarity. They employed every possible German cruelty against the Jews long before my book was published."
The German philosopher and historian Ernst Nolte argues that the German reaction to Germany Must Perish! supports his contention that World War II was a genuine response to German fears of a worldwide Jewish plot. 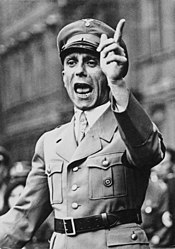 Nazi Propaganda Minister Joseph Goebbels wrote in in his diary: "This Jew did a real service for the enemy [German] side. Had he written this book for us, he could not have made it any better."
On Sept 1, 1941, the Nazis required German Jews to wear a yellow badge on their clothing. Goebbels claimed that Hitler authorized this step after reading Germany Must Perish!.
From their safe refuge, American Jews had no compunction about endangering fellow Jews they claimed to care about.
This was part of a larger pattern of Illuminati (Zionist) Jews enabling the holocaust.  Zionists were complicit in the holocaust, and then reaped the moral capital from their crime.
-------------------------------
Note: An earlier provocation that endangered Germany's Jews. "The Jews of the world now declare a Holy War against Germany. We are now  engaged in a sacred conflict against the Germans. And we are going to starve them into surrender. We are going to use a world-wide boycott against them. That will destroy them because they are dependent upon  their export business." - Mr. Samuel Untermyer (1933)
Related -- Did Jews Help Plan the Holocaust?
----------------Were Illuminati Jews Behind the Nazis?
----------------  The Holocaust Conspiracy

This book was clearly authorized at high levels. One particular detail stands out: sterilization of men in the military because they are conveniently clustered together and under control. There are other reasons for focusing on them. They are selected as being of adequate to excellent physical fitness, and with adequate to excellent levels of courage. In other words, they form a group like the combatants of WWI, whose death or crippling seriously weaken a nation. There are many who believe that the US military was deliberately attacked by vaccinations for precisely this reason. Gulf War Syndrome has been credibly linked not only to the depleted uranium and burn pits, but also to the so-called anthrax vaccination (which may very well have been something different) which turned men who were superb physical specimens into dying wrecks. One of the paradoxes of military existence is that while its members are in a sense above average in courage, the built-in institutional demand for obedience makes them ideal subjects for destructive experimentation or even elimination. This book was clearly not written by a loose cannon author. It was apparently an indiscreet revelation of a real program.

This book here is hateful war propaganda if there ever was. It advocates racial genocide.

This was not uncommon war propaganda for its time. The Germans were labelled as the aggressors who were out to conquer the whole world and war against Germany was needed to save the world by any and all means.
I don't believe this book was designed to intentionally create an antisemitic backlash in Germany. It was done more to alienate Germany.

The Japanese were also demonized as a race of slanted eyed subhuman invaders called "gooks".

Cartoons were used to depict them as bad people simply by their physical makeup.

Looking back, at what has been considered a just and needed war, WW2 remains a dark page in the history of humanity. This was a totally unnecessary and unjust war.