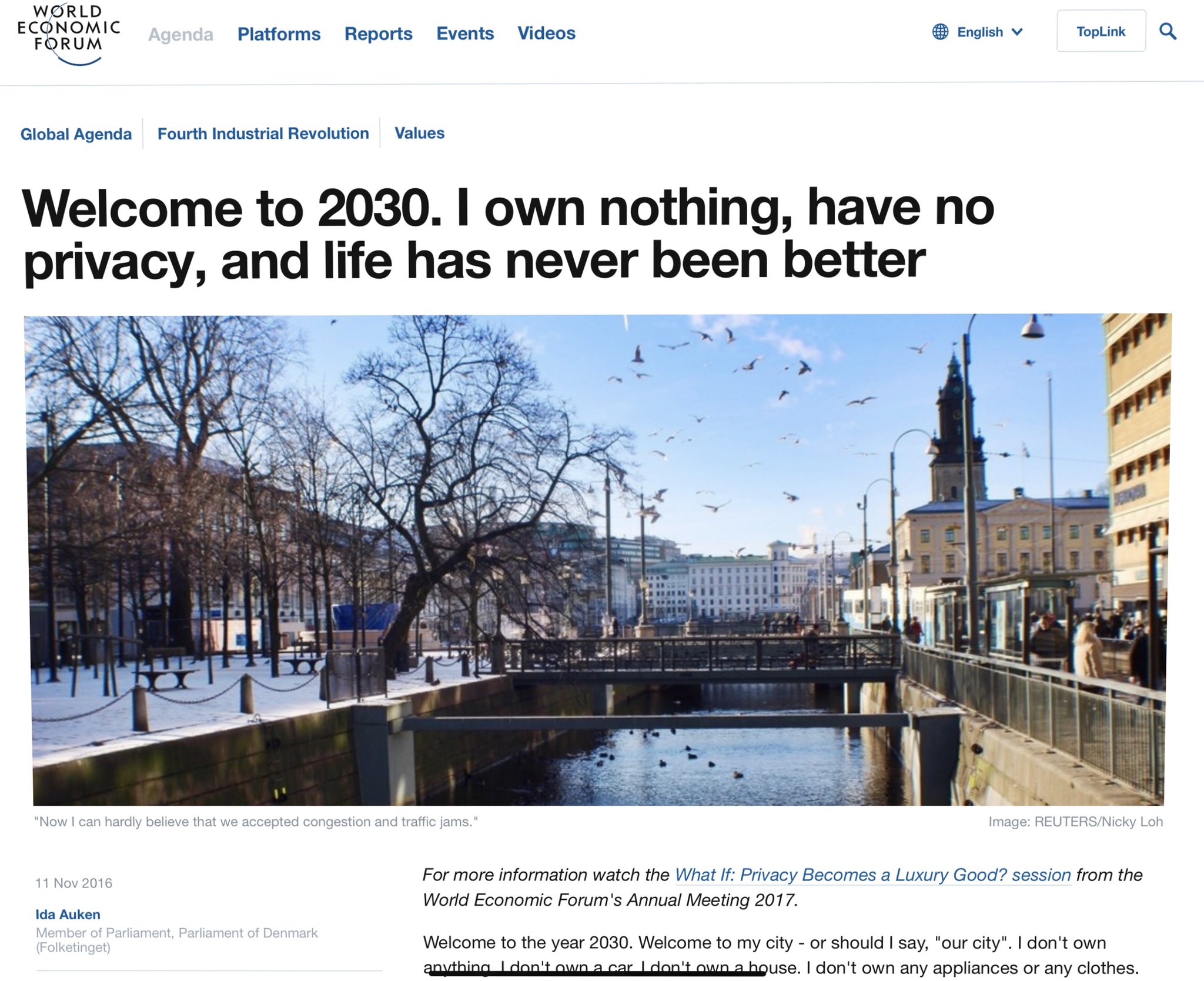 Ghanaian President Akufo Addo revealed  the "permanent world lockdown scenario" .  (Here is a longer version.)
If you compare it with the "lockstep" scenario that actually appeared in the May 2010 Rockefeller Foundation's "Scenarios for the Future of Technology and International Development" (pp. 18-21) many of the same elements are envisaged: masks, destruction of small business and travel, Digital Id. etc.
This confirms that we are experiencing an "exercise" scripted years ago, a step-by-step program leading to depopulation, dispossession and enslavement.
There is no genuine pandemic. It is just the flu in drag. A pandemic with a death-rate of less than a half of a per cent is not a pandemic. A disease with no symptoms is not a disease. Both are pretexts to introduce a dystopian NWO designed to serve the interests of super rich psychopaths. Our politicians, police, military, media and teachers all work for them.
Latest -- WEF - The Population Continues to grow but We Can Fix That With Contagions
from Oct 22, 2020
"LOCK STEP"
(Excerpts by henrymakow.com)
A world of tighter top-down government control and more authoritarian leadership, with limited innovation and growing citizen pushback.
In 2012, the pandemic that the world had been anticipating for years finally hit. Unlike 2009's H1N1, this new influenza strain -- originating from wild geese -- was extremely virulent and deadly. Even the most pandemic-prepared nations were quickly overwhelmed when the virus streaked around the world, infecting nearly 20 percent of the global population and killing 8 million in just seven months, the majority of them healthy young adults. The pandemic also had a deadly effect on economies: international mobility of both people and goods screeched to a halt, debilitating industries like tourism and breaking global supply chains. Even locally, normally bustling shops and office buildings sat empty for months, devoid of both employees and customers.
The pandemic blanketed the planet -- though disproportionate numbers died in Africa, Southeast Asia, and Central America, where the virus spread like wildfire in the absence of official containment protocols. But even in developed countries, containment was a challenge. The United States' initial policy of "strongly discouraging" citizens from flying proved deadly in its leniency, accelerating the spread of the virus not just within the U.S. but across borders. However, a few countries did fare better -- China in particular. The Chinese government's quick imposition and enforcement of mandatory quarantine for all citizens, as well as its instant and near-hermetic sealing off of all borders, saved millions of lives, stopping the spread of the virus far earlier than in other countries and enabling a swifter post-pandemic recovery. 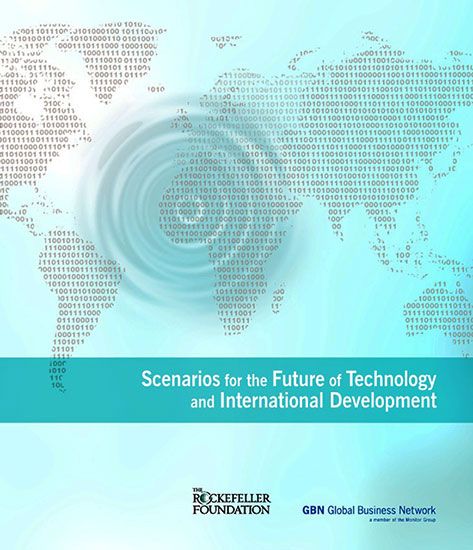 China's government was not the only one that took extreme measures to protect its citizens from risk and exposure. During the pandemic, national leaders around the world flexed their authority and imposed airtight rules and restrictions, from the mandatory wearing of face masks to body-temperature checks at the entries to communal spaces like train stations and supermarkets. Even after the pandemic faded, this more authoritarian control and oversight of citizens and their activities stuck and even intensified. In order to protect themselves from the spread of increasingly global problems -- from pandemics and transnational terrorism to environmental crises and rising poverty -- leaders around the world took a firmer grip on power.
At first, the notion of a more controlled world gained wide acceptance and approval. Citizens willingly gave up some of their sovereignty --  and their privacy -- to more paternalistic states in exchange for greater safety and stability. Citizens were more tolerant, and even eager, for top-down direction and oversight, and national leaders had more latitude to impose order in the ways they saw fit.
In developed countries, this heightened oversight took many forms: biometric IDs for all citizens, for example, and tighter regulation of key industries whose stability was deemed vital to national interests. In many developed countries, enforced cooperation with a suite of new regulations and agreements slowly but steadily restored both order and, importantly, economic growth...
"DOWNSIDES"
By 2025, people seemed to be growing weary of so much top-down control and letting leaders and authorities make choices for them. Wherever national interests clashed with individual interests, there was conflict. Sporadic pushback became increasingly organized and coordinated, as disaffected youth and people who had seen their status and opportunities slip away -- largely in developing countries -- incited civil unrest.
In 2026, protestors in Nigeria brought down the government, fed up with the entrenched cronyism and corruption. Even those who liked the greater stability and predictability of this world began to grow uncomfortable and constrained by so many tight rules and by the strictness of national boundaries. The feeling lingered that sooner or later, something would inevitably upset the neat order that the world's governments had worked so hard to establish.
TECHNOLOGY IN LOCK STEP
Scanners using advanced functional magnetic resonance imaging (f MRI) technology become the norm at airports and other public areas to detect abnormal behavior that may indicate "antisocial intent."
In the aftermath of pandemic scares, smarter packaging for food and beverages is applied first by big companies and producers in a business-to-business environment and then adopted for individual products and consumers.
New diagnostics are developed to detect communicable diseases. The application of health screening also changes; screening becomes a prerequisite for release from a hospital or prison, successfully slowing the spread of many diseases.
Tele-presence technologies respond to the demand for less expensive, lower-bandwidth, sophisticated communications systems for populations whose travel is restricted.
Driven by protectionism and national security concerns, nations create their own independent, regionally defined IT networks, mimicking China's firewalls. Governments have varying degrees of success in policing internet traffic, but these efforts nevertheless fracture the "World Wide" Web. -----------------------
Thanks to Tony B, who writes: The other "scenarios" have some of the other measures they are using. So these so-called "scenarios" (I'm guessing) were really marching papers -- released to those not in the inner circle but with the intent of getting these ideas widely distributed.

That this document was from the source indicated I have no doubt. I wonder if you can believe anything that comes from a communist press and this paper is written as if both the pandemic and the reporting of it contained some element of truth. Truth is rare and unlikely under a communist regime. Our professionals drink unlimited amounts of the purple Kool-Aid no matter how bad it tastes.

Letâ€™s not forget the punch line of this joke. Massive and widespread depopulation, through sterilizing vaccines.