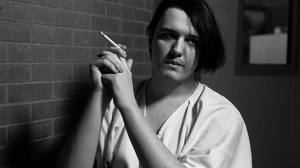 Liberals freed this man accused in the 1993 murder of 3 children:
Echols said he pretty much hates the human race, and felt that "people were of two classes: wolves and sheep.  Wolves eat the sheep."
Part One:  W Memphis 3: Liberals Rescue Satanist Murderers
by William Ramsey
(henrymakow.com)
Prior to the murder of three children on May 5th, 1993, rumors of the Satanism spread through the community of West Memphis, Arkansas.
Police heard lurid tales of hooded figures, sacrificed animals and chanting coming from wooded areas.  The Satanic coven met at an abandoned cotton gin locals referred to as "Stonehenge," a decaying local cotton gin decorated with satanic graffiti and strewn with animal carcasses.1
The entire population of West Memphis knew Damien Echols worshipped the Devil prior to the May 5th, 1993 murders.  Various reports have him saying he was a warlock or a witch.  He tattooed the letters E-V-I-L onto the knuckles of his left hand and a pentagram into his chest in sepia ink.  He told police that the Book of Revelations was his favorite book of the Bible because the Devil was handing out the punishment.
Damien, however, professed to credulous social workers that he was not involved with Satanism, but witchcraft. Here are excerpts from their reports.
"The patient [i.e. Echols] did not seem intimidated, embarrassed or shy to discuss that he had been sexually active and that many of the witchcraft practices included the patient being with other individuals in various stages of undress."2
"Staff was quite concerned as they noticed that he was meditating in his room in a bizarre and unusual fashion.  He also drew numerous pictures of witchcraft type symbols."3
"Presently in detention in Jonesboro, picked up for violation of probation, threatened to slit parents throat and eat them alive. Transferred to Crittenden, one of the kids at the detention hall cut his wrists, Damien grabbed his arm and began to the suck the blood, smeared it over his body and said he's a devil worshipping vampire. Says he's not a vampire but a witch. He is in isolation and suicide watch."4
"Damien, at that time, stated he was a white witch who worshipped the devil. Major symptoms at the time of this admission do include a pattern of bizarre and unusual thought processes, including Damien's belief that he is a vampire and that he does worship the Devil.
"He seemed to withhold no information and readily answered questions concerning his religious beliefs and the fact that he believes that he is a vampire and does worship the devil. It was the social worker's opinion that Damien was not disclosing information for the purposes of shock, that he was simply disclosing what he currently is believing."5
Prior to the murders on May 5th, 1993, Damien Echols admitted that police arrested him in possession of Satanic ritual items and that the authorities think of him as "a Satanic leader."
He stated an odd claim for an eighteen year old---that he has been interested in witchcraft for eight years.  He added that he has tried to steal someone else's energy and influence their minds with witchcraft.  One damning statement that prosecutors would use in his sentencing was the following: that he "pretty much hates the human race, and felt that "people were of two classes: wolves and sheep.  Wolves eat the sheep.
On June 8th, 1993, Damien Echols attempted suicide by taking an overdose of antidepressants.  In the suicide note to his parents, he wrote "Just remember I am a Wiccan and will be reincarnated."  This is yet another admission to the practice of witchcraft and Satanism.
After his death sentence, he wrote bizarre rants against God and Christians:
"I can finnally understand. It's because of the same reason all Christians hate me, the reason they put me here. Because they hate me because God hates me. Because he knows I can beat him so he tries to kill me. Every chance he gets. They all wear their little mask and pretend their good people and are here to help. Unmask, Unmask .... and the Red Death held sway over all.
They don't understand. They can't beat me and God still tried everything he can to kill me but he can't. Death can't stop me. I would be only the third person in history to raise from the dead. Lazarus, Jesus Christ, Damien. I will prove it very soon. Afterwards I will come to power and nothing will stop me. I wrote all this down because it is easier than trying to tell people who wouldn't believe it anyway. They will all believe it very soon."6
Clearly, the preceding information abundantly confirms that the Arkansas police and mental health authorities believed Damien Echols was involved in the practice of Satanism.  Also, Echols himself admitted as much innumerable times. This should lead an observer to conclude an occult, Satanic influence in the West Memphis murders.
---
Footnotes:
1. June 13, 1993, Commercial Appeal.
2.  Assessement by Christine Deaton, social worker, East Arkansas Regional Mental Health Center, June 1st, 1992. www.callahan.8k.com
3. June 21st, 1992. Charter Hospital of Little Rock.  www.callahan.8k.com
4. Psychosocial Assessment, Jonesboro Detention Center, September 10th, 1992.  www.callahan.8k.com
5. Psychosocial Assessment Update, Dr. W. Gallen. September 15th, 1992.   www.callahan.8k.com
6. http://callahan.8k.com/wm3/img/writ_de_writings.html
Echols to Promote his Book at Barnes and Noble