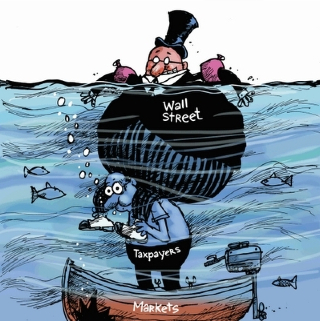 THE END OF AN ERA

"All paper assets are either worthless now or will become worthless in the very near future including paper fiat currencies. If you want to help bring down this corrupt system the best way is to opt out.

Do not play their game, you cannot win. Sell your stocks and bonds and use the funds to buy real hard assets."

[Editor's Note: As my readers know, I do not share John MacKenzie's view of paper assets becoming worthless. But I post his views to promote discussion and because I could be wrong.]


by John MacKenzie
(for henrymakow.com)

As a trader for the last twenty-five years, I have seem many business cycles and opportunities come and go. Your article Tuesday hit especially close to home because you heard a very candid opinion from a trader explaining the world of finance in a much more realistic way. It was very refreshing to hear someone from the industry be so blunt.

Nothing the trader said was news to me or shocked  me in any way. What he described was business as usual for many firms and traders. The only part I found either disingenuous or uninformed on his part was that US Treasuries would be safe and opportunities will be available to the average investor.

The fact is, there is no safe paper asset, especially ones denominated in US Dollars. When the Euro collapses, the dollar will be only a few weeks behind.

This is not the end of a business cycle, this is the end of an era. Only how we react as a group will determine whether we become slaves (more than we already are) or break free from this insidious evil that runs the financial system. Only independent thought and local community action can save us now.

Over the years I became numb to the fact that our markets were very much a casino for the super elite which preyed upon the average investor and always concocted more and more "financial instruments" to transfer wealth from his pocket to theirs without giving him anything of value. They make finance sound complicated, more like high technology rather than the simple common sense exercise it really is.

They do this to create the illusion that you need them and their products. Nothing is farther from the truth. The paper assets on the books of our banks which they are using to continue the illusion of recovery are worthless assets that will never again have any value.

The credit crisis that resulted in the collapse of Lehman Brothers and the housing market in 2008 is still getting worse. Nothing done by our so-called leaders has had any positive affect. It has all been a game to rescue themselves by bankrupting the rest of us, while telling us it is the only way to save the system we all depend on to live our lives. Another blatant lie.

The system died back in 2008 and all the nonsense of bailouts and money printing has been done to transfer the last bit of wealth and freedom from us to them. It has bought them time to prepare and execute their plan for the final take down of the US economy.

Just after the Lehman debacle, I decided to exit the industry. It was clear to me there was no recovery coming. This was not a normal business cycle that will result in a recovery and a new round of prosperity.

This was clearly the end of a very long cycle. More like the end of an era in human history. The system has no way to recover. It must be scrapped and all the debt that has been put on the backs of ordinary citizens at the demands of private bankers must be repudiated by their governments.

The debt was created by nothing more than fraud by the central bankers. They used worthless paper that they printed at will to buy all the assets of value. They transferred our real wealth to them by exchanging it for worthless paper while our elected leaders allowed it to happen willingly for the promise of a privileged life for them and their families.

All paper assets are either worthless now or will become worthless in the very near future including paper fiat currencies. If you want to help bring down this corrupt system the best way is to opt out.

Do not play their game, you cannot win. Sell your stocks and bonds and use the funds to buy real hard assets. Gold is always a good choice, but you must be very careful. Our government has a history of confiscating gold in times a great financial stress, just another way of preventing the public from protecting themselves from the mismanagement of our public finances.

A person should consider using some funds from the liquidation of paper assets to purchase necessities needed for everyday life. As the system implodes it will be more and more difficult to procure such items.

Ordinary citizens should begin to form small neighborhood groups where people truly get to know each other and begin to plan for events that will require them to depend on each other much more than ever before.

Please do not wait for local or national politicians, that is what they want you to do. Then they will create a solution for the problems they created which will only be more of the same if not much worse. It is time to create your own solution with your family and friends.

Hello Henry, in response to your article "Bankers Torpedoed Financial System", I would like to offer this comment. I started trading stocks professionally in 2001, and in 2006 I switched over to trading the Forex market.

To give an example of how sophisticated this program is, it would stop me out by either 6 pips or 13 pips each time. At the time I had no idea the meaning of these numbers, but now I do, they are Masonic numbers.

But I quickly realized this wasn't the case at all, the computer controlling the Oil market does not use an AI system, it's what I call a dumb computer. This allowed me to take trade after trade on Oil and get each one right.

I believe the reason for this is to replace the current system with a new one, which is a one world currency all digital in nature. Remember, when the Son of Perdition shows up, there will be rich people and poor people, the system isn't going away, it's simply going to be changed, but in order to change the system you have to have a good reason to do so, and they are going to create the reason and bring about the solution.

I believe they will crash world markets sometime in the year 2013, or perhaps a few years after, but we are getting very close that's for sure.