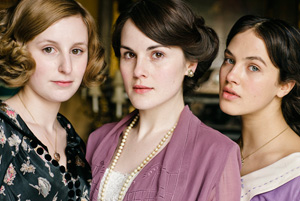 (left, Daughters of Downton Abbey had a Jewish mother.)

The English aristocracy had literally  sealed a "marriage with Jewry"
in terms of its "blood substance." The notion that Hitler regarded  England as a fellow "Nordic" country was a ruse.

Euler asked how modern Britain became the "protecting power of Jewry" despite the relatively small size of the Jewish community there.

He claimed too much emphasis had been placed on Jewish economic and intellectual influence, and not enough on the penetration of the English aristocracy by Jewish blood.

Well before British Jews were emancipated in the 19th Century, Euler argued, baptized members of commercially and financially successful Jewish families had married into the English nobility.

Virtually all of his 148-page article consisted of a catalog of Jewish conversions and subsequent marriages with non-Jews, starting in the fourteenth century.

The evidence proved that the English aristocracy had literally  sealed a "marriage with Jewry" in terms of its "blood substance."

The New World Order is an extension of the British Empire, which has always represented the rapacity, greed and satanism of a mixed-race caste of Masonic (Cabalist) Jews called the Illuminati.

If Euler is correct, it's no exaggeration to say that the English elite is crypto Jewish. This is consistent with the conclusions of Leslie Pine, editor of the renowned Burke's Peerage.

The "Jewish Conspiracy" is the British Empire. So are the American Empire and the NWO.

The "Jewish Conspiracy" is the "Establishment," founded on the power of the London-based central banking cartel.

History needs to be rewritten from this perspective. We can begin with Dunkirk (May 1940) when Hitler let 330,000 British and Allied soldiers escape, ostensibly as a peace gesture.

Hitler must have known what Friedrich Euler knew. It was common knowledge. Hitler's proclaimed desire to make a "Nordic" pact with England doesn't make sense. He knew England was not an Aryan nation, in terms of its elite.

England was the bastion of Illuminati Jewish power. If Hitler were sincere, England's invasion would have been his first priority.

He would have incarcerated the 330,000 soldiers at Dunkirk as a bargaining chip. Instead, he let them escape, and carried out British policy by attacking Russia.

As I have tried to show in my book Illuminati, Hitler was an Illuminati Jewish ("British") creation. He was placed in power to do exactly what he did, destroy Germany and pave the way for one world government. He, Stalin and Churchill were all Illuminati Jews, and colluded. (For e.g.  "Stalin's Complicity in Operation Barbarossa")

Hitler persecuted Jews because the Illuminati wanted them trauma-brainwashed in order to set up Israel, and for future use as pawns of the NWO.

At the same time, Nazi persecution served to discredit opposition to their Jewish pawns, giving them immunity as victims, holy cows, and untouchables. This allows the Illuminati to criminalize freedom of speech, better to protect themselves.

Look at the modus operendi of Marranos, Crypto Jews, Communists and Freemasons. It is the same as Hitler's:  conceal your real identity and true aims; infiltrate, subvert and eventually destroy Christian civilization. This involves subverting every individual, nation and group, including non-Illuminati Jews.

History needs to be understood in terms of this satanic conspiracy. Our tragic past is a spell cast by Cabalists. At the present rate, the future could be even more terrifying.

Hermann Goetsche (1815-1878) was a German "anti Semite" credited with inserting a chapter in his novel Biarritz,(1868) entitled "In the Jewish Cemetery of Prague."  The chapter consists of a speech by a rabbi which is thought by some (not me) to be the inspiration for the "Protocols of Zion."  It includes the following passage which might shed light on how Illuminati Jews regard intermarriage:

"We must encourage marriages between Jews and Christians for the people of Israel lose nothing by the contact and can only gain from these marriages. Our race, chosen by God, cannot be corrupted by the introduction of a certain amount of impure blood, and by those marriages our daughters will secure alliances with Christian families of some influence and power. It is right that, for the money we give, we should obtain the equivalent in influence over everything around us.  To be related to gentiles shall not imply a departure from the path we have chosen to follow; on the contrary, with a little skill it will make us the arbiters of their fate."

This is of course genetic subversion of the english people and leadership. A most diabolical strategy that reminds me of a statement made by Edward the first in the movie Brave Heart. If you can't weed them out , you breed them out! Except now it is the english themselves that are getting bred out of existance slowly but surely. Multiculturalism and multiracialism is like a long curved trail between life and death.

If you can not see the end from the beginning you will not avoid being on such a path until it is too late to save your self , your blood line and race. The winning strategy is not to follow the path.

Anyone here know how many "special allegiances" and secret societies the British Royals & Aristocrazies have among them? Can they be listed, ... such as "The Royal Order of the Garter", etc. etc. etc.

I'd be interested. My guess is: they are THOROUGHLY infiltrated by the luciferians and the cabalists.

I think the term Tony B [below] is grasping for is "the Perfidious Albion" - a old nickname for England's government in it's foreign relations.

It can be shown that the English aristocracy which came down to us after the Reformation were allied with that special class of elite Cabalist Jewry based in 15th century Venice The process of the merger began in 15th century and intermarriages began in earnest during the mid 17th century.

Most people don't know that much of the British aristocracy was replaced during this time with Cabalist Sephardic, Venetian or Marrano Jews, and Prussian Rosicrucians. The binding factor between all these usurpers was anti-Papacy, anti-Christianity, and obsession with acquisition of power through sorcery, seduction, and espionage.

When Henry VIII needed a Biblical loophole to get the Pope to annul his marriage, he employed his agent Richard Croke to get the aid of Cabalist rabbis in Venice.

One mustn't overlook the effects of Henry VIII's schism from continental Christendom. The king placed himself before God in the creed, so it was the honorable people like Chancellor Thomas more were were purged, their positions in society and their wealth usurped by the more amoral.

Henry's daughter Elizabeth I surrounded herself with Cabalists and pirates. The "Henry Kissinger" of her court was a mathematician, diplomat and spy, John Dee. Dee was a Satanist who introduced English "Christian" cabalism, which was a mixture of Jewish and Sufi magick and divination exported from Cabalists in Venice. It was Dee who originated the "British Israel/Identity" doctrine as the foundational mythology of the British Empire. He first suggested the term "Brytish Empire".

An Elizabethan court issued a warrant for Marlowe's arrest on an unexplained charge of 'blasphemy', He was released shortly before the trial was supposed to take place, and mysteriously murdered before trial.

Spenser writes "Faire Queen" to eulogize Elizabeth I as the magical "virgin" Queen. Shakespeare writes the "Merchant of Venice" to humanize Jews and cautiously soften attitudes toward Jews who are still banned from England. Shakespeare's "Midsummers Night Dream" romanticizes the Elizabethan Age. "

1600: "Puritans" first came to the attention of the public, not for intolerance, but for cabalistic Bible interpretation

I was already old before I became wise to the simple fact that the greatest evils in the world since the Talmudic inspired protest against the Christian Church resulting in its splintering into thousands of sects (each claiming all the rest are bogus), the dysfunctional Reformation following, and their child, the industrial revolution, are at least seeded in, if they do not come directly from, the English speaking world.

Masonry, although a conspiratorial creation in the court of King Herod Agrippa 43 years after the crucifixion of Christ under the name, "The Mysterious Force," did not blossom until the take over of the decaying stone mason's guild in an England already removed from right reason. It's free love entwinement with what you refer to as the Illuminati was a given.

Darwinism is probably the most nefarious spawn of that evil cabal (yes, he comes from a masonic background family) and from those insane and forever shifting theories almost every "new" evil has its base. Darwinism is the padlock on the coffin of right reason.

In simpler terms: Ever since the Protestant shattering of Christian unity, the world has rapidly descended into a licentious hell, for some time under the title "The British Empire." Every new seminal fact I learn about the world's evils seems to, in some way, come back to English speaking treachery.