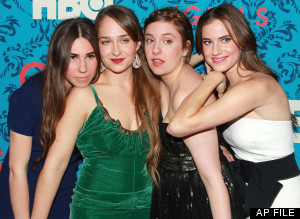 Huffpost peddles satanic depravity
Left - These young women are the stars of the HBO series "Girls."
Why not tell them to become prostitutes?  At least then they would make money doing what they do anyway.
When not displaying "butt transplants gone wrong," The Huffington Post routinely promotes homosexuality under the guise of "gay rights".
But stories like, 15 Types of Sex You Have in Your 20's (Nov. 27) are designed to convert straights. They destroy heterosexual norms like monogamy by making naive young women adopt the dysfunctional behaviour of most gays.
Sexual debauchery is the form satanic possession takes. Everyone is reduced to their bodily appetites.
by Henry Makow Ph.D.
In the bad old days, women got married when they were young and strong, and spent their 20's having a family.
Now Illuminati Satanists at places like the Huffington Post brazenly pressure young women to devote their twenties to self-immolation. They are told to experiment sexually and be promiscuous in public just like homosexuals.
"Let's be honest. When you're in your 20's, you still aren't necessarily sure exactly what you like, how you like it and who you like it from," writes "Emma Gray," associate editor of Huffington Post Women.
Excuse me, but women want love not sex.
Yet "Emma Gray" goes on to delineate 15 types of sexual depravity women should engage in to be chic. The message is, be a total slut.
For example, there's "You're Convenient" Sex which you have because the "person" (i.e. male or female) lives nearby and you're bored.
Old fashioned means a "One-Night-Stand" with "a near-stranger: someone you met at a bar or a party or one of your classes."
There's the "I could actually date you" variety.
"You actually feel some flicker of a feeling about the person you're with, you'll probably take time to think about what they want in bed and how you can give it to them, and worry that you won't do a good job."
Can you imagine anything more sick and demeaning than this? It's a denial that they have a soul. They are just bodies.
CREATIVELY LOCATED SEX
"The stacks. An airplane bathroom. A hostel hallway. Your parents' bed. A bar. The park. An alley. Your car." 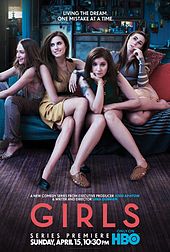 DRUNK SEX
"If you go in for this sort of thing (and you probably will), just make sure you've made a booze-resistant commitment to using protection before the first tequila shot."
FRIEND SEX
Sex with strangers is OK but "friends with benefits" is frowned upon.
Let's not forget masturbation. "Hopefully, by the time you leave your 20s you'll know exactly how to make yourself feel good, sans assistance from another person."
Well, that was a decade well spent.
Gray sees her subjects spending a lot of time having fights, so they can look forward to "Make-Up Sex."
"You'll scream at each other, perhaps shed a few tears ... and then channel all of that anger into some really excellent sexual play. It might not actually fix the holes in a romantic relationship between two 23-year-olds, but it is a good way to remind yourself of at least one way in which you connect."
Can you believe this? Is there anything more reductive? Why not tell them to become prostitutes?  At least then they would make money doing what they are doing anyway. But no, Communism always has cast women as public utilities. Prostitution would be too much like private enterprise.
HOME FOR THE HOLIDAYS SEX
"YOU'll probably run into any number of people from earlier in your life, including one or more ghosts of friends-with-benefits past. You may find it uniquely satisfying to have a short, no-strings-attached fling (or just a night) with said person(s) each time you return. If you're still living in your hometown, you'll get to capitalize on everyone who's in town."
Let's see, there's the HS football team, Jed the gas monkey and the town drunk.
Then there's Bad For You sex which is good. 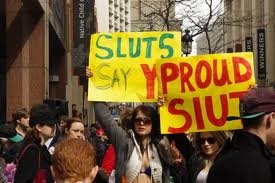 "Despite the fact that you and probably all your friends recognize that he or she is terrible for you, you may still fall back into bed with them ... just one more time. This kind of sex can be absolutely fantastic physically, but the emotional fallout usually makes it one you regret (and hopefully learn from)."
Quid pro quo sex is when someone helped you assemble your furniture and you pay with you body.
"Sometimes you just really want some help putting together your IKEA furniture. And sometimes a little bit of (purely) physical pleasure comes out of a day of Allen key usage. It's really a win-win situation."
After making it with all and sundry,  hopefully "you will have a moment at some point during your 20s (if not earlier), when you realize what truly great sex with another person feels like."
Is this woman kidding? Sexual satisfaction is tied to emotional connection. Anonymous sex is not satisfying for a woman, or even a man. As a last resort, the chic young slut can experiment with monogamy.
"Maybe it's taken getting into a committed relationship to feel comfortable telling a partner what you really want sexually, or maybe you're having a one-night-stand with someone who you have no emotional connection to but who somehow really understands how to please you in bed. Regardless, after you do have that "ah-hah!" moment, congratulate yourself. Then go try to recreate it as many times as possible. "
CONCLUSION
Do you get the impression that it's all about sex and nothing else?
After running this gauntlet, very few women will be able to
commit to one man, for better or for worse. Nor will many men want them. 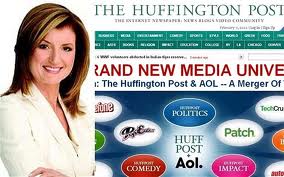 First Comment from Dan:
Founder of Huff n' Puff Post is Arianna (Stassinopoulos) Huffington (no she's not Jewish, though her early handler Bernard Levin was). Levin was her first love from her 20th to 30th birthday, and smothered her natural inclinations toward wanting marriage and children, much as I've seen many professor-student liasons go 30 years ago.  Seven years after their breakup she married former Republican Congressmen and avowed bisexual "activist" Michael Huffington - though she didn't know he was queer till he 'came out' after being defeated in a Senate race in 1997. They'd been married ten years. I don't know where she gets her money - certainly not from Levin or Huffington - but Arianna is filthy rich.   She's come a long way "baby"  since 1971, when she published her first book - titled 'The Female Woman', attacking the Women's Liberation movement in general and Germaine Greer's 1970 The Female Eunuch in particular.  But her relationships with Levin and Huffington changed her outlook. Arianna was accused of plagiarism in a case that went to court in 1981.  her attorneys settled out of court.  Her personal life after divorcing the queer politician has remained undisclosed since 1998. Huffington Post has been the flagship internet vehicle for radical chic culture creation.  It's pro-globalist, pro-gay, pro-feminist, pro-emasculation; all the way. An astounding bit of Divine Justice happened in 2008, when one of the H Post's LGBT lesbian activist columnists with a famous snob blog stabbed her girlfriend to death 222 times with a Phillips head screwdriver, then attempted to cover up the murder for three days - and when the cops weren't buying it, she went home and blew her brains out with an automatic. Huffington Post had first reported her suicide as the result of grief over the tragic loss of her lesbian lover. Gay Rights Activist Carol Anne Burger Stabs Her Wife With Screwdriver 222 Timeshttp://www.truecrimereport.com/2009/10/gay_rights_activist_carol_anne.phphttp://lifeinlegacy.com/2008/1025/BurgerKalish.jpg
I blame money.  Money doesn't care who gets it.  Will Rogers said, "God doesn't think much of money. You can tell by who he gives it to". I've experienced that wealth tends to bring out the worst traits in people, because it empowers them to indulge their darkest addictions.  Their perception becomes distorted because they're surrounded by sycophants or other addicts to cheer them on for bad behavior.  Ultimately they become delude to think their deviance is evolution and that they are visionaries.  Finally they create foundations to spread their gospel. I think that layer of empowered perverts are empowered by smarter handlers behind the curtain who use them as vehicles of subversion.   Something like Huntington Post wouldn't be tolerated in China - or Russia for that matter.

Comments for "HuffPost Pressures Young Women to be Sluts "

I just finished reading "HuffPost Pressures Young Women to be Sluts ". I have been following your site for close to 8 years now and am so grateful for your hard work and efforts in exposing the darkness that tries to consume the world. Your articles have helped me cope mentally, emotionally and spiritually with the ugliness that we face on a daily basis. They're like a light that cuts through the darkness. You have no idea how much you've helped me and probably countless others in their spiritual battles. May God bless you, protect you and guide you now and always.

There's now one for assisted suicide. How funny, you see. That series alone shows desperation. Taviboyz can't match agitprop technique with subject matter. They fly on autopilot and fumes these days.

We can also use laughter, but better, as truth is ours. No parent wants a daughter like these fictitious creatures. Not even animals rut like them. The behavior is biologically unnatural, never mind questions of spirit or simple human kindness.

I was referred to your website by a friend. I have read a majority of your articles and unfortunately I lose friends or get punished for discrimination at school when I talk about some of your theories and opinions.

In North America, homosexuality is embraced in schools to the level that straight males who walk out the classroom during a teacher's homosexuality sales pitch are most likely to be punished at school.

My concern is about the amount of butt and thong pictures that are parading online social media websites. A few years ago, thong and butt pics would have been treated as pornography.

Now we see Facebook Pages that show women bending over with a string barely covering their anus and the pictures do not get taken down no matter how it is reported because of Facebook acceptance of (quote) limitations of nudity.

What are your views on the flooding of women's butt pictures online?

About your recent article on Huffington Post about 15 ways to sex, India's morals have gone down the drain since the hybrid of Hollywood and Bollywood in the 2000s.

I am afraid of living in a world where being a housewife is a symbol of oppression while a woman who has phallic character, works labour intensive men jobs, sexes with every Tom and blindly aborts babies is a symbol of freedom.