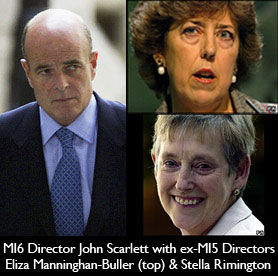 Contrary to the popular image, many MI-6 agents start as trauma- brainwashed child sex slaves. "Red Ox" was one.

In an email, he said: "You are right about Royal Arch Freemasonry and MI6. I have been in these meetings as a young boy. Games played with electroshock, paedophilia, drugging, group rape. The main purpose is disassociation, not sexual gratification.

The person who did it to me was Thomas Hurd (MI6) and this was at Douglas Hurd's cottage . Also met John Scarlett and Eliza Manningham-Buller, and Stella Rimington. Blair, Mandelson, Kinnock, Saatchi, Cameron, Osborne and others (Simon Cowell, Piers Morgan) all attended. It makes perfect sense if you are worshipping Satan."

This is additional confirmation of the basis thesis of this website: that the world is run by a satanic cult, cabbalists empowered by the central bankers. Cult members are controled by their sexual excesses and blackmail.

I asked "Red Ox" to tell his story: "There is something of an interracial sex cult (along with the bestiality and pedophilia) at the heart of the British Government."

OXFORDSHIRE, ENGLAND - Douglas Hurd was running for leader of the ruling Conservative Party (UK) in 1990. As a nine- year old boy, I had a 'chance' encounter with the Hurds at the Theatre, in Chipping Norton, Oxfordshire, now David Cameron's constituency.

This early November Pantomine, was enjoyed or endured by a collection of Hurds including Douglas, his son Thomas and Thomas's wife, the very     attractive Catherine.

[Douglas's son] Thomas Hurd was approximately 15-16 years older than me. It seemed like a 'chance' meeting, but I suspect it wasn't. They have a phrase called "having the X Factor" where people are targeted before birth. They knew my mother was an illiegitimate grand-daughter of King Edward VIII.

Also in the crowd was the Hurd security, and the watching KGB, a few rows to the front, in the guise a woman with a large wide-brimmed hat... [Ed. Note: It appears that Red Ox was also recruited by KGB at an early stage. He sees MI-6 & KGB as essentially one and their rivalry as Masonic office politics. He says most members of these agencies are so compartmentalized, they haven't a clue of the bigger picture, i.e. both agencies serve Rothschilds.]

In the course of this performance, Douglas was doing the usual grimace of an Alice-in-Wonderland initiate Royal Arch T (T=torture) Party sufferer of the past, after the local Oxfordshire cast directed some attempts at jokes at him.

Douglas has a reputation as a "nice man", his son not so much. Indeed a GCHQ colleague informed me "the problem with Thomas is that he confuses cruelty with cunning".

During this pantomime I "annoyed" Thomas, particularly by catching sweets thrown in Douglas's direction. It was like something from *The Matrix* and not without skill, the way this nine-year old ducked and dived, denied poor Thomas his penny sweeties, bounced one of his glasses and snatched one off his head. And I know ... I was shown the video seven years later...

Now, I would like to say "Thomas didn't know whether to torture me, f*** me or something else!" at this point, but it seemed pretty clear he *did* know, and invited me via my parents to a local Cricket class he was teaching, which quickly turned into an invite round "for Tea".

[Ed Note: In May 2011, Catherine Hurd, wife of Thomas Hurd, mother of five jumped/was thrown to her death from roof of their townhouse in NYC. Pictures of both Thomas & Catherine Hurd seem to have been removed from the Internet]

Oh dear! As explained T in Royal Arch/MI-6 language means Torture, and preparation for use as some kind of mind controlled 'slave', probably sexual.

The KGB were watching and seemed equally sure: going to the trouble of going undercover at this cricket club months in advance, and fitting me with bugs that picked up at least aurally, everything that went on at Douglas Hurd's cottage prior to Bohemian Grove.

This may be a good time to put in a first reservation about Putin, Medvedev and the Russians. Their central bank is controlled by the Rothschilds, and they have an uncanny ability to worm their way into MI-6 situations who they at least "used" to work with. "Hmm" as they say... but we'll continue with the tale.

"T" IS FOR TORTURE

After some persuasion, most probably including psychotronic weapons, my parents seemed to find it "a good idea" to entrust me to Thomas Hurd for a week, after never having let me stay with anyone else, ever, before. 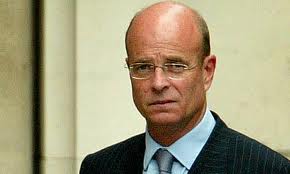 During this time: John Scarlett (left) "Eggman", Stella Rimington "Cruella" and Mikhail Repa all communicated to *me*, at least. Funny time to be developing imaginay friends, my parents said.. not examining their own sudden change in parenting behaviour!

Now, because I had the KGB 'with' me, the events at Thomas Hurd's house can be remembered, even with some slight disassociation. I am not a scientist, but guess that having people prompting you and keeping you active aids memory. A lot of effort goes into making people forget, usually.

So what happens if you have "T" with the Royal Arch? It mainly involves a cattle prod and stories from Alice in Wonderland. This has been discussed in depth and I can confirm what has been said is pretty well spot on. Thomas Hurd was the one applying the cattle prod to me, and I still have the moles to prove it.

Purpose of "Alice" (another nickname) is to shock the victim to program oneself in the manner directed by the torturer. This will include doing exactly what is asked by the British Government, smuggling, assassinations, and sex.

The school I went to is called The D**** in Oxford (ages 7-12). Mark Allen of MI-6 went there as a boy. Some of the other lads who went there, such as the Hon Nick Knatchbull also experienced "Alice". Most of the boys go on to Eton (age 13-18) where there must be a fair few having gone through it.

Knatchbull used to confide to a boy Joey Vlasto and myself about the "horrible" things that his father and friends used to do to him. Father is Lord Mountbatten. When I spoke to Nick about being dressed up in a yellow fisherman's outfit and electroshocked, he said he'd been through exactly the same thing.

At Hurd's house, When John Scarlett (MI-6) was running the electroshock "Alice" or "T" session on me, he allowed me to sit in the "Royal" chair.

There are chairs for 2 types of programmer, one Royal and one normal. The normal one is usually handled by the likes of Andrew Marr and Daldry.

I gave Hurd a shock, which he was pleading with me not to do, then gave him "one for luck" and for complaining, which Scarlett laughed at. Of course, he knew that Hurd would get his revenge just a few minutes later, for a lot longer (!), and that was the purpose of allowing me to antagonise him.

This next bit is a touch bizarre, but essentially there is something of an interracial sex cult (along with the bestiality and paedophilia) at the heart of the British Government.

After introducing himself as the Eggman, and saying some people find it funny that he lost all his hair at a young age, Sir John Scarlett took me to another room with Rimington, Thomas Hurd and Richard Tomlinson, in which they had a line-up of male escorts wearing headphones and blindfolded.

Similar games were used to convince me to go out/breed with Asians: one touching moment including Thomas and I lying on a bed visualising the "bum" of about a 7 year old girl called Anita, who was about the only Indian girl I knew.

The electroshocks increased if I professed not knowing anything about Indian culture, not knowing any Indians (!) (you are also allowed Pakistani's and middle eastern women) or getting the answer wrong to "in which country is the Taj Mahal?"

Now obviously there was a lot of other stuff thrown in, but I can honestly say the interracial sexual content was highest and reinforced the most. What better way to control people than through their sex drive?

It's a way of avoiding same race heterosexual relationships, as a skilled psychologist may tell you. What is the natural reaction? Go gay! Perhaps Robert Mugabe was not so far off as most thought in describing UK as "a gay mafia".

One white woman was allowed to be considered in this multi-hour torture session, her name Alison Kennedy. She's the niece of one of the participants, a senior boss at (Rothschilds') JP Morgan Mr Kennedy.

In this way, the abused becomes the abuser. "You'll become one of them" warned the KGB.

"She's the last woman in the world you should go near now".  She is related to the Bush family, myself to some minor Royals, and this Royal Arch gang are into some far-right eugenic stuff.

this is so completely bizzare and SICK that I half believe most of it could well be true
regarding this satanic/luciferian world of sin and evil behind closed doors . . .

this, btw, is the world-system that HOLY GOD ALMIGHTY is going to utterly decimate & destroy . . .
count on it. it's His promise & prophecies fulfilled.

Excuse me, but whatever is published, there, by â€œREDOXâ€ is disjointed, unintelligible and

quite annoying to attempt to read. This kind of randomphrases, incomplete thoughts and

off-my-noodle rambling is not informative. I have no ideawhat this individual is on, about.

Can you please hold their feet down, a little?

I feel I must extend some leeway given the trauma this man has suffered and the courage it takes to speak out.

There was a time in this Country when a voter had to be a male and a property owner. Do you seriously think that Obama would have had any chance at all of being elected had that
criteria not been altered?