Mikhail Gorbachev & the Plunder of the USSR 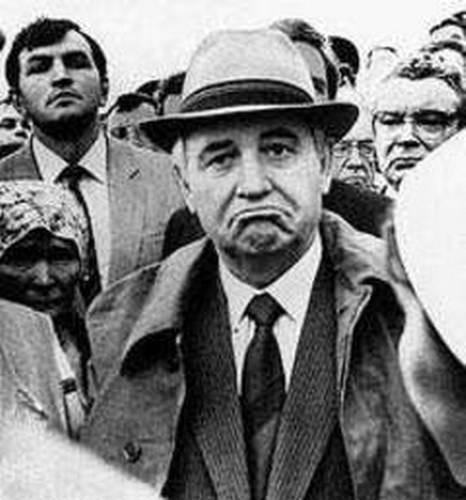 Honored in the West, Nobel Peace Prize winner
Mischa Garber is reviled in Russia as a man who looted Soviet wealth, destroyed its power and stooped so low as to advertise Pizza Hut.
by Tamara
(henrymakow.com)
Mikhail Gorbachev  was awarded with a Novel Peace Prize in 1990 for ending both the Cold war and the  Soviet Union, where he was the the last President.
In his early career as a local communist leader in Stavropol, Gorbachev was known for collecting bribes in envelops.  Stavropol folks gave him the nick name Mishka Convert (an envelop, RUS).  The size of Gorbachev's  bribes grew over time to include the Nobel  Peace Prize.
According to Professor Igor Panarin the collapse of the USSR was an inside job of  British intelligence and  Zbigniew Brzezinski who is a "British"  (i.e. Illuminati) agent in USA.  Gorbachev was a key person in British and American Secret Service operations.  Now Gorbachev is accused of the large-scale theft of gold (2000 tons) and foreign exchange reserves  in the organized  criminal gangs.
http://www.youtube.com/watch?v=KQetSYKK1zg  http://www.youtube.com/watch?v=_ROERyYNA4Y
http://video.mail.ru/mail/alexvples//205/811.html
"Under [the guise of] non-existent projects", Bill Clinton said,  "the Soviet Union gave us over 20,000 tons of copper, nearly 50,000 tons of aluminum, 2,000 tons of cesium, beryllium, strontium, and so on ..."
"Not firing a shot and without losing a single soldier" , Clinton said, "the United States with the help of Gorbachev and his group demonstrated a fundamentally new method of  demolition, brilliantly won the Third World War, crushed, dismembered and erased from the map of the World its main opponent, leaving him lying face down in the dirt and chaos, and to appeal to a recent mortal enemy for help and mercy. All as intended by the Americans." http://gorojanin-iz-b.livejournal.com/41150.html
"To conceal  his  criminal activities, Gorbachev did not even spare his friend with whom he betrayed his homeland.   Robert Maxwell , English businessman, like hundreds of other agents of influence, was killed to keep secret the plunder of  the wealth of Russia.
From August to October 1991, Gorbachev's ordered the KGB to murder almost 2000  key persons related to the plunder of USSR assets. There were 1746 mysterious suicides of the high ranking Soviet officials.
Gorbachev's criminal group called "the family" joined Boris Yeltsin's  new group and continued their  asset stripping.
During the eight years of the Yeltsin's criminal regime, about ten million people  died of hunger and deprivation.  Countries  where gold, diamonds, & other USSR assets  and many hundreds of billions of dollars  were siphoned   were not interested in returning stolen in Russia.
http://gorojanin-iz-b.livejournal.com/41150.html

MIKHAIL GARBER IS JEWISH
Is  Mikhail Gorbachev an ethnic  Russian?   No!
His real name s Mikhail  Garber. His mother is Maria Gopkalo  and  his grandfather  Andrei  Moiseevich Gorbachev, both Jews.
Until  the beginning of 20th century most of people in  Russian Empire including  the  Jews had no the last names and the  passports.  Most of ethnic Russians  lived in rural areas  and they took the names of their fathers  as last names like   Ivanov , Andreev a son of Ivan or Andrei.
Nobody  would like to take a last name  Gorbachev  voluntarily. It means a humpback in Russian.  Something is wrong in  Gorbachev's  family.  Bad last names like Gorbachev,  Chertov (devil , RUS),    Volkow   (wolf, RUS)  were given in rural  community meetings for a felony , mistrust, bad character  and so on.   Good people in Russian Empire  were granted with the  good last names.
"The new freedoms arising from Gorbachev's  "democratization"  and decentralization of his nation's political system led to civil unrest in several of the constituent republics (e.g., Azerbaijan, Georgia, and Uzbekistan) and to outright attempts to achieve independence in others (e.g., Lithuania, Estonia, Latvia).
In response, Gorbachev used military force to suppress bloody interethnic strife in several of the Central Asian republics in 1989-90, while constitutional mechanisms were devised that could provide for the lawful secession of a republic from the U.S.S.R"
http://www.britannica.com/EBchecked/topic/238982/Mikhail-Gorbachev
On November 7th, 1990  Alexander Shmonov , Russian worker  from Leningrad  S-Peterburg now)    failed  to assassinate Gorbachev  on a  tribune of Lenin's Mausoleum  on Red Square near Kremlin in Moskow.
Shmonov accused Gorbachev of killing 21 people at a meeting  April 9, 1989  in Tbilisi, Gruzia and  shooting 131 people on January 20, 1990 in Baku.  Shmonov decided to remove Gorbachev to make the election of a new President of the USSR possible.
http://www.kv.com.ua/archive/2037/social/2045.html
Igor  Bunin, a  political scientist       (Центр Политических Технологий)  wrote, " The impression of Gorbachev  is  significantly different in Russia and in the West.  If he is considered as a national  hero and  a liberator in the West, but  in the eyes of the former Soviet people Gorbachev  is a man who brought not a freedom but a  chaos".
According to the deputy director of the Center for Political Technologies Sergey Mikheev,   Mikhail Gorbachev's rule was incompetent, naive and inadequate,  "I do not think it was  because of Gorbachev is a member of a Masonic conspiracy.  In fact, I think the situation is much simpler. This group of fools were  undoubtedly used by smarter people",   Mikheev wrote.  As a result,  Mikheev  believes, that Russia  was   damaged the most severely  for the " last 300 years ".   Сергей Михеев: «Горбачев сдал все достижения, которые заработали предыдущие поколения» " ОКО ПЛАНЕТЫ информационно-аналитический портал
In 2013 Gorbachev will be 82 year old.   In 2011 Gorbachev criticized   the authorities in Russian Federation and regretted that he did not save the USSR.  http://www.newsru.com/russia/02mar2011/gorby80.html
Do the Russian  and  former Soviet people still believe to a pathological  liar Mikhail Gorbachev? The ethnic Russians   gave the names to   Gorbachev : Mishka Convert,  Gorbach , Pizza Hut.  It is shameful that the former President of USSR Gorbachev advertised Pizza  Hut  in Russia.   Russians ask why is this devil man Gorby still alive?
--
Also by Tamara - Putin is Jewish Pawn, says Russian Patriot
The Perestroika Deception

Comments for "Mikhail Gorbachev & the Plunder of the USSR"

Communism isn't dead, it "played possum" in 1991 so it could catch us off guard. It is now stronger than ever in the West.

Gorbachev exploited a corrupt Soviet bureaucracy not to "free" Russians, but to hand over Russian national resources over to the Globalist banker mafia (also known as 'the West').

There's a Russian rumor that Reagan and Bush promised Gorbachev asylum in California, and membership in the D.C. elite pedophile ring for this service. Sure enough, after installing proxy whore Boris Yeltzin, Gorbachev surfaced in San Francisco with his own building in the Presidio. The Presidio was indeed the locale of the famous day care scandal in which dozens of children implicated NSA Colonel and avowed Satanist, Michael Aquino - all the more true because the case was suppressed despite overwhelming evidence.

Gorby moved in after the coast was clear, his quarters at the Presidio flew the flag of Knight of Malta.

I'm familiar with Gorbachev's father's history under Stalin and Khrushchev, and the "crypto-Jew" accusation is a new one on me.

I have a tendency to flat out distrust anybody in a position of power, though there have been a few exceptions. Gaddafi is one whom I believe fought the Globalists. I've watched Putin with scrutiny since he first appeared.

Compare the sorry Glasnost through Yeltzin treachery with Russian history since 2003, when Putin busted YUKOS oil and several Rothschild proxy "oligarchs" and put them in prison. Mikhail Khodorkovsky remains behind bars to this day, despite massive pressure from the Globalist mafia to get him out.

Five months ago, Gay parades were officially banned in Moscow for 100 years. http://www.bbc.co.uk/news/world-europe-19293465

That same month (Aug 2012), NWO stooges "Pussy Riot" were convicted of hooliganism motivated by religious hatred (against Christianity), and each was sentenced to two years imprisonment.

Well then I guess it makes sense such a devil would advertise such a disgusting pizza.