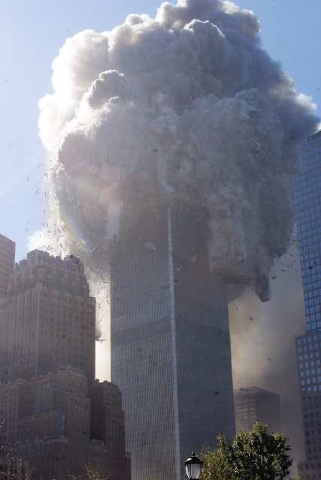 
Two recent articles regarding the use of mini-nukes were examined very briefly.

Was WTC Demolished by Mini Nukes?

Interesting how what has been described by Bill Deagle MD and Jeff Rense as the best presentation/comprehension of information on the WTC on the web is NEVER ADDRESSED. Nope, seems they only want to deal with 'others' articles, all of which somehow seem to have easily seen, ludicrous, easily disproven Bogus Science - a ready made poison pill to discredit micro nukes.

Virtually all of the WTC residue has been accounted for in my articles and it is classic, textbook, nuclear reaction residue. In over 2 years, only one reference has been scientifically refuted - Thermite and that was by me.

The US Government's Usage of Atomic Bombs - Domestic - WTC

Update: The US Government's Usage of Atomic Bombs - Domestic - WTC

(not an endorsement of the site)

The data presented is an above ground detonation. Its crude design would have been unfocused and would have been no where near as clean as a 3rd (neutron) or fourth generation nuke. Based on this referenced proven data, the size of an underground, focused, Minimum Residual Radiation -

- micro nuke explosion could have been 2 or 3 times as powerful and still been basically contained by the WTC buildings, possibly as large a 1 kiloton, but believe that would be about the maximum that could be used and still be effectively hidden.

The data presented is an above ground detonation. Its crude design would have been unfocused and would have been no where near as clean as a 3rd (neutron) or fourth generation nuke. Based on this referenced proven data, the size of an underground, focused, Minimum Residual Radiation - http://www.thepriceo.../09/25/ward.htm - micro nuke explosion could have been 2 or 3 times as powerful and still been basically contained by the WTC buildings, possibly as large a 1 kiloton, but believe that would be about the maximum that could be used and still be effectively hidden.

'Understanding The Scam of Thermite on 911' by 'Dick' Eastman/'Dr.' Jones
A simple rebuttal to the lunacy of http://www.rense.com/general86/therm.htm

Of course, it was a mini-nuke(s) strategically placed.

Of course the Danish Nobel prize winner found traces of nano-thermite, which btw did not exist when the WTC towers went up, this "nano-technology", so no "planned demolition" with nanothermite was possible, and no past convetional method of planned demolition vaporizes anything, it is quite that simple. He found traces of nanothermite, because it is classic misdirection from the usual suspects: use more than one method, more than one set of perps. hell, if bringing the towers down was the main objective, then they could have said Islamic terrorists have taken the WTC towers hostage with NUKES!

But as usual, more than one set of perps, more than one set of ulterior motives...it is quite that simple! They NEEDED to stage melting steel and place evidence that misdirects away from nukes. They NEEDED to ram guided drones into the towers, maybe Boeing refueling tanker jets remote guided from wherever they guide the drones over Afghanistan and Pakistan, to whip up fear, hatred, hostility, and acceptance of restricted freedom.... it REALLY is quite that simple!

I assume the nanothermite was placed during the "cable repairs" shutdown the weeks before. Just mis-direction: nanothermite doesn't toss I-beams the size and weight of school buses 600 ft in an arc like a Peyton Manning deep pass. Look closer at the video of the collapses if you don't know what I am saying. Like they were shot out of a huge cannon. Nuclear.

Well this is one of the great distractions. Lets all focus on the cause rather than the effect which many use to dissect it into smaller and smaller minutiae to justify an lengthly blog.

It doesnt matter one iota whether it was inbuilt thermite, special tiny nukes or little green men from mars doing this (of course all of us with tin foil hats would have been immune...lmao).

It doesnt matter if it was Al Qaida, dancing israeli onlookers, an inside job or any other variation on the conspiracy story.

Its the effect that matters.

The effect was to mobilise a nation into war and, in the process, bring its allies with it. This successfully creates an opportunity (as General Smedley Butler implied) for the powers that be to make money out of the racket, impose draconian security, and tax us into oblivion to create the FIAT money which is used to enslave our lives.

Who gives a monkeys about the "how" ... until the "why" is appreciated, along with the misinformation of the minutiae bloggers and the reasons for it, all of this is completely irrelevant.

Until we understand the benefits of the "why" on those who effect the "how" and know how to effectively communicate it, all of our posts are vanity.

The most overwhelming evidence I have found so far about nukes being
used is contained in this thread by Dimitri Khalezov, at GLP:

9/11 Nuclear Demolition Of The WTC By Dimitri Khalezov

The World Trade Center was the brainchild of David Rockefeller, who devoted ten years manipulation of the Manhattan port authority, city government, and assorted private interests to give over the land and approvals for the project.

The demolition material (thermite) was built into the towers when constructed. It's really very simple. No 'mini-nukes' or UFO's or holographic plane projections necessary.
The towers were designed to be dropped into their footprint. It's been standard in massive buildings built in cities to plan their demolition before they are even built. After WWII skyscrapers weren't designed to last forever, but to have a service life of about 40 years. It's cheaper to simply install demotion materials during construction than have to install it 40 years later. I assure anyone, the WTC was locked and loaded when it was built and was 'good to go' for the Millennium fireworks show David Rockefeller arranged to stupefy the world.

As an engineering physicist, it steadily came to my attention over the past 7-10 years that mininukes and/or micronukes have been directed at many targets other than their highly obvious use on WTC: Bali, Jakarta, OKC, Taba Hilton, Hariri, Al-Khobar, Beirut Marine Barracks, etc etc etc.

Oh, they did definitely use thermite also, in spite of Ward.

They used quite a lot of things.

Recognizing the unmistakable GZ evidence of MD is key to understanding what happened there...

Thermite, thermate, nano thermite etc. is not capable of causing molecular dissociation. This has been proven at http://911u.org/ and also by Dr. Judy Woods.

As for Dr Steven E Jones, he is a US DOE scientist and has been beyond dishonest. He is part of the problem, not the solution. He and Jim Hoffman’s 9/11 truth movement is nothing more than a disinformation hub for the NWO.

What we all witnessed on 9/11 was a highly unconventional release of thermonuclear energy.

Three facts to consider knowing that fissionless fusion IS and has been possible for some time:

Given how heat disperses, and the radial symmetry about the vertical axis to the destruction of the towers, it is therefore reasonable to deduce that temperatures along a thin line within the core of the towers (think of the lead inside a wood pencil) were very high indeed, probably very much higher than the tens of thousands of degrees at which molecular dissociation occurs.

And lastly, about the steel all being hauled away…….what steel? There was very little steel left because it turned to nano-dust (like the concrete and marble). In fact, 80% of each of the towers 500 million ton mass NEVER hit the ground…..it simply floated off into the atmosphere. All of the convoys of trucks we saw for months coming and going from GZ supposedly hauling away the steel, were in fact hauling DIRT. Dirt? That’s right…DIRT! They hauled in dirt, spread it all over the rubble, then cleaned it up and hauled it away. And this went on for years! Didn’t this happen at Chernobyl?