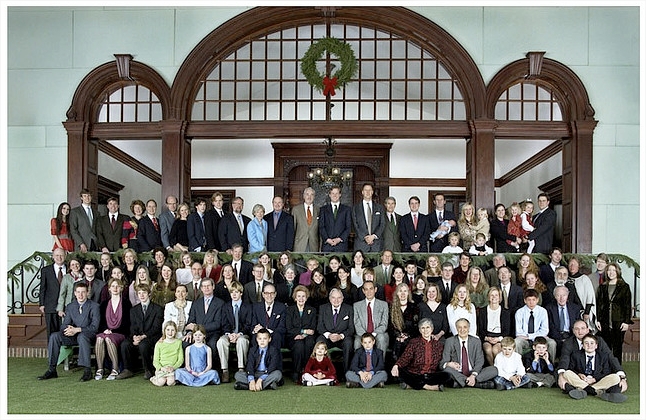 
"If the patriarchy were a bad thing, the very rich wouldnÊ¼t keep it jealously to themselves."
Olavo de Carbalho argues that families need to be grounded in something larger: size, place, craft or religion.


by Olavo de Carvalho
(translated from the Portuguese by Sam Peyo)
The "traditional family" which Christians and conservatives defend so ardently against harassment from feminists, gay militants, pansexualists etc., as well as against the usurpation of legal parenthood by the State, consists of father, mother and a couple of children. The cinema has established this image as the living symbol of the fundamental values of American culture and has transmitted it to all the countries within the cultural orbit of the United States.
But this family model is not in the least traditional. It is a byproduct of the Industrial Revolution and the French Revolution. The Industrial Revolution dismantled regional cultures and the family labor units within which agricultural skills and the crafts were transmitted from father to son over generations.
The traditional families were broken up into small uprooted units that migrated into the city in search of jobs. The French Revolution did the rest by abolishing the traditional bonds of territory, family, personal and group loyalties, replacing them with a new system of legal and bureaucratic bonds according to which the obligation of each individual is first and foremost to the State, and only secondarily (by permission of the State) to relatives and friends.
The "natural" trial-and-error-based society formed throughout the centuries with no sort of planning was replaced by a planned, rational-bureaucratic society in which human atoms devoid of any deep organic and personal bonds would retain only mechanical relationships founded on State regulations or superficial affinities arising from casual encounters in the work and leisure environment. Such is the basis of the modern nuclear family.
Max Weber described this process as an essential chapter in the "disenchantment of the world", where the loss of a higher meaning in existence is poorly compensated for by ideological surrogates, by public entertainment and by a "religion" increasingly robbed of its essential function of shaping culture as a whole.
Under such circumstances, as pointed out by Weber, it is only natural that the search for a deeper meaning of existence becomes restricted to increasingly private and intimate settings, among which is evidently the nuclear family. But as a juridical entity which is subject to ever-growing regulation and State intrusion, the nuclear family has ceased to be the ideal shelter for intimacy and so, in this respect, is being gradually replaced with extramarital relations.
Without patriarchal protection, unmoored and adrift, and depending entirely on overwhelming State bureaucracy, the modern nuclear family is structurally a very fragile entity and is unable to resist the impact of accelerated social change and the "generation crisis" which invariably accompanies each major change.
Far from being the bulwark of traditional values, it is a step in a comprehensive historical-social process leading towards the total eradication of family authority and its replacement by the impersonal power of the bureaucratic State.
THE FAMILIES OF THE GLOBALIST ELITE
It is not a coincidence that the crumbling of society into small family units permanently threatened by self-destruction has occurred in parallel with the significant strengthening of a handful of traditional patriarchal families -- more precisely the families that led, and continue to lead, this very same process. I am referring to the noble and financial dynasties which make up the nucleus of todayÊ¼s Globalist elite.
The "social scientists" subsidized by these vast fortunes manage to persuade the general population that the dissolution of patriarchalism represents a great progress towards freedom and human rights, the stronger the rule elite clings to the patriarchal continuity which safeguards the perpetuation and expansion of their power over generations.
The patriarchal family is evidently a source of power: the social history of the past two centuries is that of the transformation of patriarchal power into a privilege of the very rich, while it is denied to millions of schmoes whose children are taught by university professors to celebrate the end of patriarchalism as the advent of an era of almost edenic freedom. The unavoidable development of this process is the destruction  -- or self-destruction -- of the nuclear families themselves, or of whatever is left of them after each new "generation crisis".
Thus, in this context, the "defense of the family" is in reality the defense of an abstract entity, the palpable form of which came into existence with the sole purpose of being extinguished. The threat from feminists, gay militants and pan-sexualists is real, but it is only alarming because of the intrinsic fragility of the entity at which it is aimed.
Either families will group into larger units founded on deep personal and lasting bonds, or they will eventually be eradicated. Religious communities may at times serve as temporary shelters where families find protection and solidarity.
But these communities are based on a strict moral uniformity which excludes dissidents who therefore easily become the victims of the draining of church members through "generation crises". The patriarchal family is not an ethical-dogmatic unit: it is a biological and functional unit built around permanent objective interests, in which even bad and ill-adjusted elements always end up being employed in functions useful to the system as a whole.
After all, if the patriarchy were a bad thing, the very rich wouldnÊ¼t keep it jealously to themselves, but would distribute it to the poor and themselves split up into small nuclear families. If they do precisely the opposite, it is because they know what they are doing.
By the same author - The "Comfortable Invisibility" of the Globalist Project

In the end, what fractures the family is economic (although emotions play a part). The Rockefellers hoard enough money to go around to everyone.

Most people don't have that luxury, and families become distant or fractious over money issues. It's true in my family on all sides. If there is no religious/ethical bond to hold things together in spite of economic woes, kaput.

t's not only by social engineering that families are under attack, financial measures are a sure way to destroy the bonds that tie. In France, under the French Napoleonic Code for inheritance, the situation is dire.

When the head of the household - usually the father - dies, the property does not pass to his surviving widow but is instead broken up into equal portions amongst the children. There is a usufruit clause which will allow the widow to remain in the property for the rest of her life but this has to be in place before the death of the husband. What this means is that the widow will live in a "grace and favour" situation which is impoverishing, and the property on her death is then broken up amongst the surviving children. It is virtually impossible to avoid the breakup of the property by specifying who will get what, as the apportionment amongst the closest blood relatives is rigorously enforced by the Code and there is a tarif structure that decides the percentage of shares in the event of no children but other surviving relatives. There may be pressure on the widow to move if the children are ruthless enough to want their cut. Thus there can be no accumulation of wealth as at each death the property is further broken down into smaller amounts that can be passed down. Basically it is the State that decides who gets what.

Families like the Rothschilds presumably have enough wealth to circumvent these laws using loopholes or other instruments of which I am unaware but the majority of families in France have to abide by these heartless and draconian methods. Without property families cannot be strong. Inheritance laws and taxes are designed to bring down families who might otherwise build up wealth and strength.

I've appreciated the site over the last several weeks, but this week's article on Patriarchy by Olavo de Carvalho
really struck a nerve. The picture at the header with the Rockefeller family portrait is so powerful, it's stunning.
Add to that the caption at the side " ..strong patriarchal extended family for them, gender-confused isolation and solitude for us".
Such a brilliant description of the horror that's gripped our country and it's families for the last century.

I'm very sensitive about this right now. I have a 22 year old nephew who's just fathered a child out of wedlock. His 16 year old brother has done the same. Yeah, 16. That's right. But the 22 year old is pretty bright. He understands that there's a global satanic elite, and that they're working to grind this country and its populations down.

But lately I've tried to get him to see that creating broken families is an integral part of that plan. I think he's starting to get it, but I'm desperately hoping he'll be moved to action - take responsibility for his new child and his mother. Maybe even marry her and create an intact family. That's my prayer right now. I'll be showing him this article as soon as I can.
Thanks to you and Sr. Carvalho for a finely written piece.