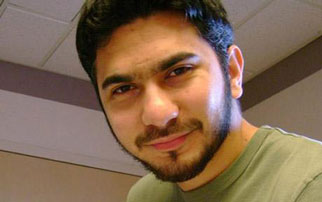 Salman has fled Canada because he also fears being framed .

To see evidence of suspected Zionist involvement in the Times Square bombing atempt, one has to just examine the CCTV footage. The film shows the individual changing his clothes after getting out of the car which had been packed with explosives. He is clearly a bald Caucasian man with little or no facial hair.

Here is the video to watch:

Since the individual responsible for planting the car  bomb is not even remotely similar to the suspect, Faisel Shahzad, we must question why he has admitted to planting the bomb in the car. I believe he was handpicked by a local informant as the scapegoat in the operation beforehand. Someone knew well ahead of time the day and time he would be leaving the country on a trip back to Pakistan.

So why did he admit guilt? Well my guess is: his family, friends, and relatives were arrested in Pakistan by the Zionist controlled puppet government. They were threatened with being locked up for life, or even worse raped or killed. Pakistan's Interior Minister, Rehman Maalik is a Mossad asset. Just like Zardari, Shujaa Kayani, and other civilian and/or military leaders in Pakistan, the country's leadership has been bought out. They took full responsibility for carrying out terrorist atrocities which Pakistani Nationals did not commit - i.e. 26/11 attacks in Mumbai, India.

They would even release Jewish and Israeli terror gangs attempting bombing operations while dressed up as Afghans in traditional clothes. They have brough permanent shame to Pakistan and deserve to be arrested and put on trial.

The Times Square incident was not meant to be a real terrorist operation, but rather a psy=op meant to bring fear and xenophobia into the minds of the local populace. This is because the bombs were assembled in a very crude like manner using ingredients and devices that can be purchased at your local variety store.

This was a psychological terror operation staged by the Western intelligence agencies. Think about this for a second. Terrorists are in charge of ensuring security for the rest of society. Now, who would have thought? That is like asking a working prostitute to educate others on the essence of virginity, chastity, and fidelity. It's the ultimate irony.

This is war. War is deception. By Way of Deception, Thou Shalt Do War  Are the rest of the people in the West ready to fight and bleed to death either overseas or on their own soil on behalf of Organized Jewry?

For any questions or further comments, one can reach my official spokesperson Adam Austin:

Related: "Portrait of a Patsy"

> We've never come across a terrorist who wasn't trained, equipped, radicalized, entrapped, or provocateured by a western intelligence agency or a terror group controlled by a western intelligence agency.
Times Square Bomber Linked with CIA-Controlled Terror Group
>
> Why do I doubt that Osama bin Laden was behind the atrocities of September 11? In the first place, it was a sly, covert operation. The massive U.S. budget for such things, which exceeds the gross national product of most of the countries of the world, is not spent in vain. In the covert world there is as little room for small, independent operators in the United States as there is in the news business, the automobile business, or the drug business. Every political organization you can think of, especially those who wish ill for America's ruling establishment, is thoroughly laced with informants on the federal payroll, recent lamentations about a shortage of "humint" resources notwithstanding. Furthermore, trickery and deceit are the life's blood of the intelligence community. Israel's Mossad even has it enshrined in the organization's motto, "By way of deception thou shalt do war."
>
> The whole case for Osama bin Laden's guilt rests upon the assurances of people whose business it is to fool us, abetted, as usual, by another group who, through the years, have shown that it is their business as well, the American news media. With the record that they have established with the first World Trade Center bombing, the Oklahoma City bombing, the Waco massacre, the crashes of TWA 800 and Pan Am 103, going all the way back to their treatment of the John F. Kennedy assassination and further, we simply have no reason to trust a single thing they tell us. Recent history has shown that the more important the matter, the greater the likelihood that they will lie to us about it.

Ok, his family may have been got at, but I`m inclined to believe the suspect has been on an MK-Ultra style brainwashing course. Torture and rendition is a cover for the secret centers used in the manufacture of patsies. Look at the surviving Mumbia gunman...he was the most photographed....yet no one shot him!!! They were all patsies, but he was the star of the show.

Going back to TS, look at the video of him getting out of the car...strange CCTV angle with a very limited field of view, no height, can see what is going on beyond the parked vehicles...so was this a shop CCTV system, if so, why was it pointing into the street and not down on the door way? Why did he park so close to a camera? He went to the trouble of allegedly building a crude car bomb and was allegedly willing to escape...did all this, butd not checkout the CCTV systems....I don`t think so.

And another thing...this is a copy of the London Haymarket attampted bombing...one day after Brown walked into No10...of course, this was another false flag attack by the NWO. Just link the myriad of simple mistakes...shoe bomber tries to lite shoe bomb in cabin.LOL Panty bomber does the same...they want conspiracy theorists, this is very sofisticated propaganda, its designed to hit everyone. Gantanamo and Abu Ghraib are decoys to a much more sinister program.

Just a few thoughts from London...wonder if we are about to get an SIS thriller after the election?LOL

See, just a day before the event, I commented on “surrendering Islam” and mentioned that Islam is being targeted specially from Pakistan and here we have another example. THEY just wanted a reason to destroy whatever humanity is left. What one can do against all odds. I pity on Shehzad

i was studying the video of the alleged terrorist who planted the SUV bomb in time square. It is clearly falsified news.
neither of the two men, who people say are suspects, are coming from the SUV. how come they don't show someone as they are coming out of the driver's side of the vehicle? all of the people that are in the video are just pedestrians who are walking around. if you rewind the video to the very first frames, you can see that the guy who was taking off his shirt, came from across the street, not from the vehicle. how is it that they don't have video of the SUV first arriving, being parked, and the the driver getting out of it??? maybe because it was planted by some government agents? looks pretty fishy to me.

One small detail. There are two men in this video. The one coming from the SUV is not the one changing his clothes. They cross paths. Of course, neither of them resemble the supposed "suspect."