The Double Standard in "Hate Crimes" 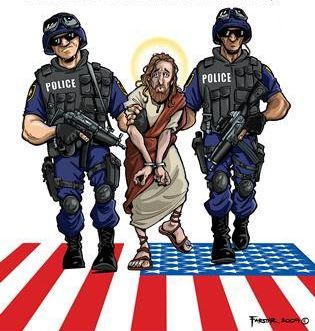 America's White Christian majority is not
eligible to be a victim of "hate crimes."
This status is reserved for minorities who have been
selected to advance the NWO, where believers in the Gospel of Love
are the "haters."
(Satanists invert everything: war is peace, good is evil etc..)


When is a "hate crime" not a hate crime?

When its victim is Christian, White or heterosexual.

"They were punched and kicked to the point that one was left vomiting from being hit repeatedly in the stomach.

"Lara Isaac, whose 17-year-old son was one of the victims, said the attack was a reprisal for the pair "Tebowing."

"They were scared for their lives," she said. "No one was manning the exits to make sure this wouldn't happen. The kids who did this apparently knew that."

There was no suggestion of  "hate crime" in the newspaper account.    A reader, Jimmy, queried: "How about a police response? Investigation? Charges?"

If two gays or Jews were punched out for expressing their beliefs, you can bet that would be a hate crime. The police and the media would be all over it.

Clearly, "hate crimes" only pertain to crimes against Illuminati-sponsored minorities. They are used to advance the Illuminati's satanic, homosexual and "multicultural" agenda.

"Hate crimes" are perfectly acceptable if directed against those opposed to this agenda.

A whopping 70 percent of these "hate crimes" were anti-Jewish.

"Anti Christian" incidents didn't even register. A total of seven per cent were internecine -- four per cent anti- Catholic and three percent anti-Protestant. Nine per cent were anti-Islamic.

Similarly, of 1,436 hate crime offenses based on sexual-orientation, 98.5% were crimes against homosexuals. The remaining 1.5 percent were "the result of anti-heterosexual bias."

And of the 3,816 racially motivated hate crimes, 71.4% were motivated by anti-black bias while only 17.1% resulted from anti-white bias.

So when Black youths targeted White visitors at the Wisconsin State Fair last August, the cops were quick to dismiss the idea that this was a "hate crime."

No wonder. If the cops aren't Freemasons themselves, they have been thoroughly indoctrinated by the Illuminati Jewish B'nai B'rith.

Ted Pike writes: "Through their "No Place for Hate" programs in cities and communities through America,(the B'nai Brith) ADL intensively organizes city governments, schools, churches, civic organizations, and citizen groups to combat "hate and homophobia" (Christianity) in their communities."

Would you say false flag 9-11, the mass murder of 3000 people and shredding of our civil rights, rates as a "hate crime"? Americans need to face the horrible reality.  The people who own our media, our universities, and our politicians have been waging a war against humanity for centuries. The only haters are the Illuminati bankers.

"Hate crimes" are designed to disarm the target population.


---
Related - "Bullying" is another Illuminati Psy-op

Comments for "The Double Standard in "Hate Crimes" "

Did you ever notice that when luciferians force immorality upon us it's called "freedom of expression" but when Christians or Muslims try to protect moral values it's called "censorship"?

I wasn't Christian in 1971 when a friend and I were beat up after a football game, but I can tell you this: Christians don't 'fear for their lives' any more than Jesus did. The Romans slaughtered Christians for 3 centuries because they wouldn't worship idols or Man. They were murdered in the tens of thousands in France during the Revolution, again in Russia, Portugal and Spain during the Communist revolutions, and by the Nazis and Soviets both during WW II. Christians don't press charges for "hate crime" - and they forgive the attackers.

I hope it's clear that those that trust in Big Brother for protection and vengeance aren't really Christians or Muslims, Buddhists or Orthodox Jews because that's putting the State before the Creator. For we wrestle not against flesh and blood, but against principalities, against powers, against the rulers of the darkness of this world, against spiritual wickedness in heavenly places.

The late comedian Bill Hicks told anti-Christian jokes but they were aimed at hypocrites wrapping themselves in the Bible. After a show in Alabama one night, two big rednecks cornered him in the parking lot and were about to beat him up. One said, "We don't like what you said about Christians in there".

Bill Said, "So forgive me".