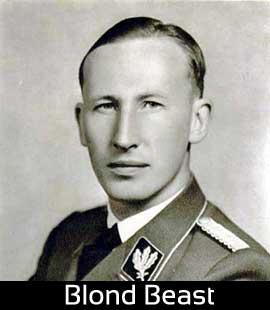 
Ironically, the only member of the Nazi hierarchy who fitted the Aryan ideal was probably part-Jewish. More ironic still, Reinhard Heydrich (Chief of Gestapo and SD) is considered the architect of the "Final Solution," the plan to exterminate European Jewry.

Recently, I argued that a heretical Jewish Satanic cult, the Sabbatean Frankists, have plotted to exterminate the Jewish people since the 18th century. The hallmark of this cult is that they intermarry and impersonate members of other nations, ideologies and religions, including Judaism. (Heydrich's background fits this profile. ) The Sabbatean-Frankists are the progenitors of the Illuminati, responsible for Communism, Fascism, Zionism, Socialism, Liberalism, Neo Conservatism and the NWO.

As my readers know, my hypothesis is that the Second World War (and all world wars) was a hoax, and that the leaders of all sides were Illuminati (Freemasons) Sabbatean Frankist Jews. The object was to destroy Western civilization by eradicating natural leadership, and degrading and demoralizing the population. The goal is world government secretly directed by this Satanic cult. In other words, FDR, Churchill, Hitler and Stalin may have been in cahoots. Heydrich may have been assassinated in 1942 because he knew too much and posed a threat.

The issue of Heydrich's Jewishness revolves around his grandfather. Was his father, Bruno Heydrich, the scion of his mother's first or second husband? Defenders of Heydrich's Aryan purity (like Edouard Calic) say Ernestine Linder's first husband, Karl Julius Reinhard was Bruno's father. But the consensus seems to be that her second husband Robert Suess, a Jew, is Bruno Reinhard's father.

Bruno Reinhard was a Wagnerian opera singer, composer and conductor who labored to be accepted as a non-Jew. He married his professor's daughter, a real Aryan, and opened a music school in Halle with 120 students. But he could not overcome the suspicion that he was Jewish. The fact that he was a Freemason supports the view he was a Frankist.

Brian Rigg, author of "Hitler's Jewish Soldiers" writes: "When Heydrich was a child in Halle, neighborhood children made fun of him, calling him "Isi" (Izzy), short for Isidor, a name with a Jewish connotation. This nickname upset Heydrich. When he served in the navy, many of his comrades believed he was Jewish. Some called him the "blond Moses." Others who lived in Halle have claimed that everybody believed that his father, the musician Bruno Heydrich, was a Jew. Half-Jew Alice Schaper nee Rohr, who took piano lessons from Bruno, claimed, "We all knew he was Jewish. ...He looked just like a typical Jew." In town, Bruno was called Isidor Suess behind his back. With such rumors going around, it was not surprising that Heydrich felt continually burdened by these allegations, especially when he served as an SS general."

The Illuminati created both Communism and Nazism in order to destroy Russia and Germany. One purported to be about class war; the other about race war but both ruses were pretexts for war. Hitler cared nothing about racial purity. His own grandfather was Jewish.

"Throughout Hitler's political career, he made several exemptions from his ideology," Brian Rigg writes.  "Hitler granted thousands of Mischlinge (partial Jews) exemptions from the provisions of his racial laws."


Heydrich (1904-1942) was one such exemption. Heinrich Himmler was Heydrich's boss. He told his doctor, Felix Kersten, that Heydrich was part-Jewish and that Hitler knew this. Hitler said his "non-Aryan origins were extremely useful; for he would be eternally grateful to us that we had kept him and not expelled him and would obey blindly. This was in fact the case."  (The Kersten Memoirs, 1957, p 97.)

In other words, Heydrich was doubly ruthless against Jews to prove his loyalty. Heydrich accepted tasks "which no one else would care to do."

Himmler went on: Heydrich "was convinced the Jewish elements in his blood were damnable; he hated the blood which had played him so false. The Fuhrer could really have picked no better man than Heydrich for the campaign against the Jews. For them he was without mercy or pity."  (99)

Heydrich was in charge of the Einsatzgruppen units, trucks which followed the Wehrmacht and gassed Jews. He set up the system of concentration camps and formulated the Final Solution at the Wannsee Conference in Jan. 1942.

Though he died at age 38, Heydrich's list of other "accomplishments" is formidable. Calic credits him with the Reichstag Fire (1933) and the "Night of the Long Knives"  (1934) . Fest credits him for fabricating the evidence that led to the purge of the USSR army, and traditional generals in the Wehrmacht. He paved the way for the Anschluss and the piecemeal incorporation of Czechoslovakia. He organized the anti-Semitic pogrom known as "Crystal Night."

But I suspect he knew too much about the hidden collaboration of Hitler, Stalin and Churchill. And just as Churchill  got rid of Hess for Hitler (making room for Bormann,) the British PM and Freemason also disposed of Heydrich. The British sent Czech agents to ambush Heydrich and Hitler's doctors finished him off.  Heydrich was the only major Nazi leader to be assassinated.

My hypothesis is that the Nazi Movement was created by the Sabbatean Frankists (Illuminati) to advance their Satanic world government through the destruction of Western civilization. This agenda is well advanced. We live in a mind control chamber where elite social engineers administer wars and viruses; news and education; culture and entertainment all designed to transform us into willing and obedient servants.

Our political and cultural leaders are chosen by the Illuminati to advance their diabolical scheme. That is the meaning of success today. The story of Reinhard Heydrich is another reminder that things are not what they seem. The Nazi SS, Bolsheviks, British and US Freemasonry were different branches of the Illuminati. Mankind is possessed by this Satanic cult. That's why current events and culture make little sense, except in these terms.

-----
See Letter Below from author of Heydrich Book

let me first thank you for your blog and your insights. I read it and it is thought provoking.

I do have some criticisms:
The revisionist have proven conclusively that the Holocaust as taught in mass media history books and so on never happened. Jews were simply never killed by massgassing. The prove that most assumptions and statements about the holocaust is a plain lie can be found on the internet, especially at www.vho.org . As you are intelligent I assume there is another motive behind it to still propagate the holocaust lie. Jews have been prosecuted in Germany for various reasons but there wasn't a extermination program.

I also think it is your jew-pride in being a superior people who sees in every eminent men a jew. Despite they may have an ancestor or two in their distant genealogy it doesn't make them jews. If Heydrichs grandfather was a jew, which I very much doubt as you don't have proof but only suspicions, he himself would himself have considered a germen. His life proofed that.
----

I cite Himmler's doctor and 2 historians. As for the gassing, the Nazis gassed 70,000 Aryans who were retarded. Why wouldn't they gas Jews? What do you think they did with the 75% who were unfit for work? Send them to resorts? My parents were in Poland during the war and they say the gassing was widely known.

You state in reply to Werner: "Why wouldn't they gas Jews? What do you think they did with the 75% who were unfit for work?"

If you start reading on about page 260 in this book, shortly you will find the evidence that those who were unfit for work were not killed.

LECTURES ON THE HOLOCAUST BY GERMAR RUDOLF
http://vho.org/dl/ENG/loth.pdf

Following your main thesis: the Nazi's did penetrate the U.S. economy and strongly influence the anti-communist position within the State-as we know from paper clip and investments made on Wall Street. This intrusion has created a 4th Reich.

On the other hand, according to defectors like Anatoliy Golitsyn, (The Perestroika Deception : Memoranda to the Central Intelligence Agency Edward Harle Ltd; 2nd Ed edition (1998) ISBN 1-899-79803-X) and dissidents like Petr Cibulka, the Soviet Union never fell but strategically withdrew to play the West. Cibulka asserts that agents of the Soviets are in power all through Eastern Europe-specifically both the current leader of the Czech state Klaus and past leader Havel.

For Cibulka, not being aware of the Satanist thesis, it is all a Red plot to destablize and collpase the West. There is also a rightist blog that essentially throws down the gauntlet by asseting-again without Satanism that the agenda is a Soviet world: http://once-upon-a-time-in-the-west.blogspot.com/2006/09/feature-red-world-order-united-nations_16.html

All of this is a long road to go but I think it important: is it not the case as Dostoyevsky says ""If God does not exist, everything is lawful."
Is this not the outlook of modernity and not limited to Sabbateans.

Your hypothesis seems rational, and for that reason it is disturbing on several levels: With the magnitude of the Illuminatiâ€™s plot, over such a long period of time, to gain control over the minds (and literally the souls) of the worldâ€™s population, and the misery that the world has been put through, and the innocent men, women and children who have been spiritually and physically damaged, many would ask, â€œWhy would a good and loving Deity allow such a diabolical scheme to progress and succeed in such a manner?â€

In a prior comment, to a different article of yours, I alluded to the idea that Atheism has some of its umbrage in Deity because of its deep-seated â€˜disappointmentâ€™ in Deity. Some of that disappointment is rooted in precisely the area you speak about with reference to the Illuminati.

In other words, how could a good and loving God allow so many innocents to be destroyed by the false doctrines of evil people over such a long period of time?

It would appear that a-theism â€œwithout Godâ€ could be attributed to the world at large; that true believers in Deity donâ€™t really believe at all but merely pay lip-service for a multitude of reasons not even related to 'believing'.

I think your hypothesis is the strongest argument for the legitimacy of atheism since many atheists would welcome the chance to believe in a Deity who actually appears to care (and do something overtly visible) for the human race.

Just a thought, Henry ~ I enjoyed reading your article. You do make sense.

The whole point of existence is that man must do God's work. If we mess up, we can't blame Him.

Otherwise, mankind would sit in a deck chair and be served by a "good and loving" God. There would be no contest.