Was Winston Churchill A "Soviet" Agent? 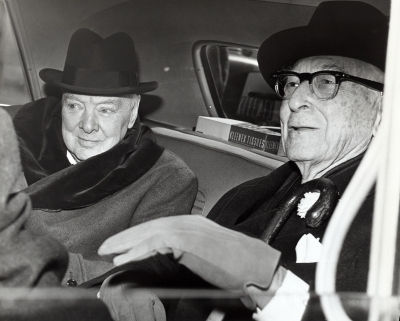 The USSR was a proxy for the Rothschild banking syndicate. Victor Rothschild was a "Soviet" spy. He was also Churchill's handler. The Illuminati make war on humanity by instigating war and controlling both sides. War is a devilish dance of suffering which they choreograph.


Winston Churchill's mother was a high-class whore, and his father was a wastrel who suffered from syphilis.  Churchill was a Jewish stooge for W W One. The sinking of the H.M.S Hampshire [June 5, 1916] was a British false flag operation, a Churchill/Jewish plot to kill Lord Kitchener, who was planning [to convince the Russians to make peace, which would have forestalled the Bolshevik revolution.]

Churchill's original Sandhurst military file, describes him as a drunken aggressive homosexual, and only his mother sleeping with Prince of Wales, stopped him from being prosecuted for sodomy.

Psychologists understand now that putting same-sex children together in boarding schools for years and hot-housing their development with no contact with the opposite sex, breeds homosexuality. The term "Fagging" meant the younger boys were bullied to do jobs for the older ones, and same sex relations grew from this at a colossal rate,as told in detail by Guy Burgess.

Arthur Ransome (1884-1967), an author best known for his "Swallows and Amazons" stories, was an expert on Russian affairs, having cultivated friendships with both Lenin and Trotsky. He was a high ranking MI-6 operative with the codename S76.

This man, according to Winston Churchill's nanny, Elizabeth Anne Everest,
knew first-hand from Russia that Churchill was working for Rothschild interests, not Britain's. Many British intellectuals have suspected this, and Walter Thompson, Churchill's bodyguard, said Churchill felt more at risk of assassination for betraying his own people in Britain, than from the enemies he made abroad,

Churchill received Jewish banker money paid into a secret account in the name of Colonel Arden. Maxim Litvinov was from a wealthy Jewish banking family, and, according to Constantin Volkov, also paid money to Churchill. It was Volkov's knowledge of this and his documents tabling it, which caused Kim Philby to silence him.

Churchill comes from a long line of traitors. He was a  descendant of the 7th Duke of Marlborough, the first duke came to fame during the reign of Queen Anne. John Churchill played the prime part in the overthrow of James II, when William of Orange arrived in Britain, John Churchill the first Duke of Marlborough was paid 6000 pounds per year by Solomon of Medina. The other Jewish merchants paid William of Orange 2 million gilders. William III then with John Churchill founded the Bank of England in 1694, for the Jews to run and they still own it and us now,  converting the English people to tax and national debt slaves. Each new born babe in Britain today January 2009 already owes the Jewish banksters, 15,347 pounds each and it's rising.

So when the Jews call us to war on our Saxon brothers in Germany, or peaceful Muslims in Iraq, we have to go.

A recent 20 pound note had a star of David depicted on it,  showing we are all Jewish property.

The whole article appears here.  (In the original, Stokes makes an erroneous or confusing reference to Oscar Wilde who died in 1900.)

See also-  Another article on this subject by Stokes

Comments for "Was Winston Churchill A "Soviet" Agent? "

i got out my box of diaries going way back to when i was nursing, and i can remember something that may be important, with insiders like this man who know things they should not, when in hospital they always have a 'relative' sit with them 24/7 so that if they speak they can shut them up,

a conversation i had at the time with other staff members in the canteen, and one woman now long dead said, the doctors would 'let people die' if they were a threat to national security, i gather this man was a potential whistle blower and from that article he must have talked about things he shouldn't have, so i am surprised he left hospital if you get my drift, we had several people in there like him, and they always had a 'relative' with them as a minder

i was a nurse in a well known London teaching hospital which had a secret ward for military casualties in the early seventies. I remember this man stokes coming on this secret ward, the talk among the staff was that he was sent to Moscow to collect documents from a would be defector and was betrayed. He was captured and badly beaten by soviets. He was sentenced for anti soviet activities to svetmagorsk camp on the siberian border, where he very foolishly kept trying to escape, each time the punishment was more severe, being buried alive, mock firing squads and being hung up for daily beatings with canes was part of what occurred.

It was said that the British government denied knowledge of him until he threatened to talk, the embassy then got him back to Britain where he weighed under 5 stone and had been set alight with petrol, he had experienced a total mental and physical breakdown, the plastic surgeon who worked on him was a good friend, who said he would never be right.

This article is relevant

Greetings from Scotland. I always find your articles of great interest. I offer you some thoughts about Kitchener. I have visited the Orkneys. These islands are some distance from the North of the Scottish mainland. Now, I had already heard that Kitchener's ship had been put in the way of danger completely deliberately. What happened after his ship was attacked was that orders were given, on the Orkneys, that no help should be given to any survivors from the shipwreck. Consequently, there was hardly any help. However, a few local people did help some of the survivors, who somehow got ashore. I asked about this on my visit to the Orkneys, and the story that I had heard was confirmed. There is a memorial, as I recall, for the victims. The people that I spoke to seemed to think that Kitchener was disposed of, quite deliberately, because his direction of the War was considered unsatisfactory. I must say that I was shocked to have this story confirmed by Orkney people, who had no reason to lie about this matter

There is a subtext to the line of thought distinguishing "Gentile" from "Moorish" or "Jewish" or "Hindu" banking. The most honest sub-text seems to be presented that a dedicated "Mithraic" cult emerged in Judaism (and we are not talking Christianity here by the way despite all evidence) and that cult, the Frankist cult, controls international banking.

One difficulty with this thought is the Bank of England existed before Jacob Frank. The other difficulty is the Vatican Bank existed prior to either one. So it seems to me that all roads lead to Rome. I think a bright light on banking needs must also concentrate on Mother Church and not solely on families like Medici or Fugger.

I knew this man Stokes in the late sixties. He was attached to the anti soviet desk; then seconded to a particularly secret section, and all i can say is that he was an amazing crack shot who could live rough in holes in the ground for days on end.

He must be a great age now. I had a photo of him with peter wright and the Cypriot rep outside the Cyprus station taken in 1969. he was in a position to know a lot of stuff and i did not know he was still alive.

I agree that Stokes is a sloppy writer who makes some serious errors. In this business we learn to separate the wheat from the chaff. Stokes is basically on the right track. What is novel is that he presents Churchill as quite literally a "Soviet" agent and names some possible sources.

Obama could be a "Soviet" agent as well. Frightening isn't it?

PS- Stokes may be referring to this (from wikipedia)

In the most noted case, brought by Winston Churchill in 1923, Douglas was found guilty of libeling Churchill and was sentenced to six months in prison. Douglas had claimed that Churchill had been part of a Jewish conspiracy to kill Lord Kitchener, the British Secretary of State for War. Kitchener had died on 5 June 1916, while on a diplomatic mission to Russia: the ship in which he was traveling, the armoured cruiser HMS Hampshire, struck a German naval mine and sank west of the Orkney Islands.

In 1924, while in prison, Douglas, in an ironic echo of Wilde's composition of De Profundis (Latin for "From the Depths") during his incarceration, wrote his last major poetic work, In Excelsis (literally, "In the highest"), which contains 17 cantos. Since the prison authorities would not allow Douglas to take the manuscript with him when he was released, he had to rewrite the entire work from memory.

Douglas maintained that his health never recovered from his harsh prison ordeal, which included sleeping on a plank bed without a mattress.