Zionists Push US Into Another World War 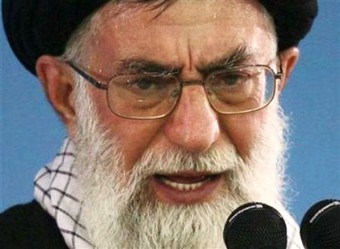 Ayatollah Khameini (left) has been cast in the role of Hitler  in the Illuminati's   spectacular new sequel, "World War Three." Once again the West rides to the rescue of Jews threatened with "annihilation."


The ducks are lined up for another world war. As in previous world wars, Zionists are conscripting the United States. If Americans get suckered again, they deserve the consequences.

The headline on Drudge.com was: "Ayatollah: Kill all Jews, annihilate Israel..." Americans are expected to rally to their defense, like a trained dog.

Drudge links to an article on the NeoCon web site "World Net Daily."   (Obviously Drudge is another Zionist asset.)

The article, written by "a former CIA operative" says, "the Iranian government, through a website proxy, has laid out the legal and religious justification for the destruction of Israel and the slaughter of its people....The doctrine includes [preemptive strikes] wiping out Israeli assets and Jewish people worldwide."

The source of this sabre rattling is an article on a Farsi website by one "Alireza Forghani, a conservative analyst and a strategy specialist in Khamenei's camp."

"Alireza Forghani, a computer engineer, wrote in his essay that Tehran should exploit the West's dawdling over a strike on Iran to "wipe out Israel" by 2014 - that is, before President Mahmoud Ahmadinejad's term runs out. The post was widely covered in the Iranian media on Saturday."

So rather than a government spokesman, Forghani is really "a blogger," with a two year time horizon for a "preemptive attack."

This is how the Zionists beat the drum for war.

And what did Khamenei actually say?

The Supreme Leader of the Islamic Revolution said the regional uprisings will bring about decline and isolation for the Zionist regime and stressed:

"One of the outcomes of these movements is decline and isolation for the Zionist regime, which is very important, because the Zionist regime is truly a cancerous tumor in the region and it must be, and will be, cut off."

Saying the "Zionist regime" is a cancerous tumor is hardly the same as the  advocating preemptive attacks and the genocide of every Jew on earth.
It sounds like regime change to me. Even Israelis would welcome that.

But the Zionists and their many proxies want you to believe the worst, because they want to sucker the US into another self-destructive world war. Russia, China and even Pakistan have said they will support Iran.

BTW, why is it OK for Pakistan to have nuclear weapons but not Iran? Why is it OK for Israel to have more than 200 nuclear warheads? But we know,  WMD's are just an excuse for aggression and war. Iraq proved that.

It's time to remember that "Islamists" like Ayatollah Khameini and the Zionists are actually Masonic brothers. They form two arms of a pincer designed to throw the world into chaos, out of which will emerge Illuminati tyranny.

Like the Zionists, Khameini and Islamic fundamentalists were put into power by the Illuminati, i.e. the Masonic Central Bankers. (See also, David Livingstone's Islamists/Zionists: Following the Hegelian Dialectic.)

"The Third World War must be fomented by taking advantage of the differences caused by the "agentur" of the "Illuminati" between the political Zionists and the leaders of Islamic World," Pike wrote.

"Agentur" means "agent." The same term is used in another Illuminati document "The Protocols of the Elders of Zion" which dates from the same period.

The key point here is these wars are contrived. They are "caused by agentur of the Illuminati" on both sides. These agents owe their first loyalty to the Illuminati not to their countries.

Their aim is to destroy their respective countries and profit from the carnage.

Pike continues: "The [third] war must be conducted in such a way that Islam (the Moslem Arabic World) and political Zionism (the State of Israel) mutually destroy each other."

The rest of the world will be drawn in. "Meanwhile the other nations, once more divided on this issue will be constrained to fight to the point of complete physical, moral, spiritual and economical exhaustion..."

At this point, they will be constrained to accept the Luciferian one-world government.

"Zionism is but an incident of a far-reaching plan," leading American Zionist Louis Marshall, counsel for bankers Kuhn Loeb said in 1917. "It is merely a convenient peg on which to hang a powerful weapon."

Zionism has been effective in conscripting the US into World War One and World War Two.  Now, they are going for a hat trick.

Americans, and Westerners in general, have forfeited their sovereignty and culture to an alien movement which is itself a tool of Satanists. The "far-reaching plan" is to use war to establish a Satanic dominion over humanity.

Comments for "Zionists Push US Into Another World War"

Speaking of Iran's Masonic crypto-Jewish leadership inexoribly manipulating their nation into nuclear World War Three from the outside in with the West, it could prove instructive to note that that phony Iranian globalist New Age cult, heavily promoted by the U.N., the Bahai Faith, is made up of many wealthy and influential Iranians from Jewish backgrounds.

It's also worth considering at this time of the "New World Order coming into view", that the Bahais have an on-going love affair with the U.N. and Israel, with their Universal House of Justice headquartered in Haifa, Israel; promote Feminism (In a traditional patriarchal Middle Eastern society? What a joke.); multiculturalism; world government; a one world religion based on their own faith; and all the rest of the usual NWO claptrap; and constitute a model for the structure of the World System with their organizational structure by networking, intelligence-sharing committee, extending from the village, town, city, state, region and clear on up to the global level.

I should know of what I speak, having been one myself in the 80s and 90s, and as such, have my name on file at the U.N., forever; and more worrying still, an excommunicated member at that. A Muslim Iranian man once remarked to me that they are a vary dangerous group. Now I think I know exactly what he ment.

So now we hear rumors of something called "Hojatia", a "radical fundamentalist Iranian Shiite Cult that believes they must bring on WW III to speed up the arrival of the Muslim messiah, the 'Mahdi'.

Sound familiar? "Christian Zionism"is a radical fundamentalist belief that the United States has to bring on WW III to speed up the Second Coming of Jesus. According to polls over a third of Americans who support Israel report that they do so because they believe the Bible teaches that the Jews must possess the Holy Land before Jesus can return.

"Christian Zionism" is an oxymoron since Jewish Zionism was never based on Scripture or prophecy. Theodore Hertzl, founder of Zionism was a self proclaimed atheist, like Karl Marx. Hertzl's diary is filled with vitriolic remarks about Jews and Judaism. ""An idea rose on my heart to bring on anti-Semitism and to obliterate Jewish wealth."

Initially Hertzl wanted any land far from Europe as long as it wasn't in the Middle East, such as Argentina, or Madagascar. It was the British Imperial strategist Cecil Rhodes that fixed on Palestine. Rhodes' interest was strictly geopolitical. He saw an opportunity to force a British proxy colony between oil rich Arab states.

Hertlz' rather prophetic remarks about "bringing on anti-Semitism" to break Judaism and herd Jews to his envisioned secular utopia make one wonder, in light of what happened during WW II.

The only links for "Hojatia" trace back to representatives of the CIA and the Simon Wiesenthal Center. My hunch is that "Hojatia" is as bogus as Christian Zionism, and if Ahmadenijad really belongs to such a cult, then he's as phoney as George W. Bush when he pretended invading Iraq was a 'holy war'.

Sound familiar? Yes the doctrine of the triumph of evil leading to the return of the Messiah is Kabbalism.

I know little about the "Zionist" agenda as I haven't studied it much, but if they are Masonic Jews and Masonic "Christians" then they are just satanists. A satanist is always in substance the same thing. Remember, Christ is quoted as saying something such as the devil will never divide against himself. The w hole political class are simply evil and they are drinking the Kool Aid. They may switch flavors, but it's still Kool Aid. My two cents....

It would be much more intersting to explore the complicity of the Iranian Leadership and its ties to the Mystery Schools. You never get that in this phony alternative media, only what the U.S. and Israel is going to do to Iran.


For Instance, why does Iran fail to expose the laundry list of crimes behind those NATO powers pushing for UN Sanctions which they have publicly decried as an act of war? Same goes for Hugo Chavez.

Israel's Mossad owns the Ecstacy market, why isn't the Iranian Government exposing it? Why no publication of NATO's illegal Narcotics and sex trafficking routes? The Iranian intelligence must have good intelligence on illegal NATO and Mossad operations all over the world. Is it really incapable of a professional 5 million dollar documentary on such major war crimes as the 9/11 hoax, Apollo Moon Hoax, Gulf of Tonkin Hoax?


Could it be that top level Iranian leaders have already met with Pentagon officials to plan this U.S. strike on Iran? What about this Shiite Hojatia Doomsday cult Ahmadinejad and the top level Iranian officials are involved in? Wasn't it Brzezinski and Rockefeller who brought down the Shah and brought Khomeni to power in the 1st place

Scott poses the question, "For Instance, why does Iran fail to expose the laundry list of crimes behind those NATO powers pushing for UN Sanctions which they have publicly decried as an act of war? Same goes for Hugo Chavez."

Have you forgotten the Iranians hosted the discussion on the validity, or otherwise, of the west's sacred cow, the holocaust? What did the jewish owned western media do? They blacked the entire event. They would do the same with anything that did not suit their purpose and exposing the criminal entity of the UN, CIA, Mossad, et al would definitiely not suit their purpose.