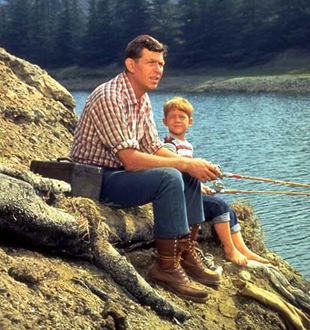 I've been casting commercials in Los Angeles for years. It was probably in 1977 that I met Ron Howard's father Rance.

Decades ago he told me a little story of a water-shed moment in Hollywood history. Ron Howard had been cast to play little Opie Taylor. Rance was at the "table read" with his son as they ran the lines. 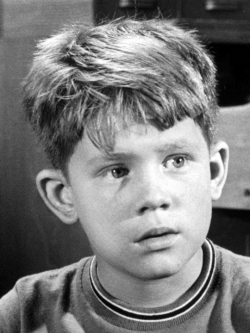 It was a Danny Thomas Production and the writers were a bunch of imported New Yorkers (like Everett Greenbaum whom I knew and loved).

Little Opie was written as a wise-cracking little Weisenheimer..... (a tried-and-true dynamic in Hollywood)

"I may be way out of line here", he started... "....but in Duncan Oklahoma... and Ardmore.... allowing a son to be disrespectful like that is a sure sign of bad parenting....and just doesn't read true."

The Creatives confabbed a while, took the advice to heart, and the change created an enduring piece of legitimate Americana.

My own father, from Guthrie, OK had a German mother and I was not allowed to call him "dad".  Too informal. It was either "father" or "father, sir".   Oh, those Germanic peoples! 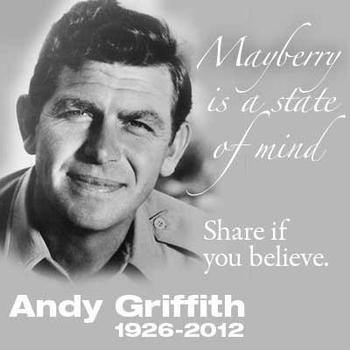 I wish I could better articulate the nuanced and heartfelt relationship which was subsequently developed between Sheriff Andy, a single-parent, and his boy Opie.

I tried to be a smart ass growing up, and my father whooped it out of me. It has returned with a vengeance....but all sublimated-like.
------

Related- The Conspiracy to Defile

Jewish boys I knew feared their parents the way Christians used to fear God, and this submission to parents survived into young adulthood.  I figured it out from observation that Jewish parents seemed to withhold approval as a rule,  which kept the boy perpetually trying to earn it.

I suspect that the "smart ass" version of Opie was rejected by the National Association of Broadcasters for violating the Code of Practices for Television Broadcasters. Every television script used to have to pass their review.

The NAB was founded by Eugene F. McDonald, owner of Zenith radio corporation, as a coalition lobby to prevent American values from electronic media from being exploited or subverted.

The Code prohibited "the use of profanity, the negative portrayal of family life, irreverence for God and religion, illicit sex, drunkenness and addiction, presentation of cruelty, detailed techniques of crime, the use of horror for its own sake, and the negative portrayal of law enforcement officials, among others. The code regulated how performers should dress and move to be within the "bounds of decency". Further, news reporting was to be "factual, fair and without bias" and commentary and analysis should be "clearly defined as such". Broadcasters were to make time available for religious broadcasting and were discouraged from charging religious bodies for access. Most importantly, it limited the commercial minutes per hour." [1]

I guarantee that any 3 minutes of 'Family Guy' or 'Southpark' violates every one of those prohibitions because that's what TV comedy writers do these days.
The industry standard is how many taboos they can break in fifteen minutes.

The Andy Griffith Show was subject to this code, as were all television shows till Norman Lear's "All In the Family" vehicle was used by CBS to challenge the code.  That same year comedian George Carlin's  "Seven Words You Can Never Say on Television," bit was the vanguard of a massive media  campaign against 'censorship'.   "All in the Family" was the prototype for the cheap video stage 'situation comedy' and idiot 'dad' that's been the standard ever since.

Comments for ""Opie" Almost Was Jewish"

I'm writing about Tony B's comment that Andy Griffith was gay. He may be right, but he may have Griffith confused with associate actors Jim Nabors (Gomer Pyle USMC) and Don Knots (deputy Barney Fife)

In the early 70's when I a pot head we used to watch re-runs of those shows with the sound off, and noticed right away that Gomer Pyle and his Marine Seargent's mannerisms and body language were so gay that they seemed to be acting to exaggerate it.

Some of those stoned observations have borne out to be on target. Not only did they cast two queers to play a US Marine and his sergeant for the hit tv show, they did so deliberately. It follows that they the director really did tell them, "play it was gay abandon! *wink wink*"

Geez, Henry, doesn't anyone know that Griffith was one of the biggest faggots who ever lived? Of course, in those days it stayed in the closet where it belongs. At least for the public. I have no idea how it was in the studio.