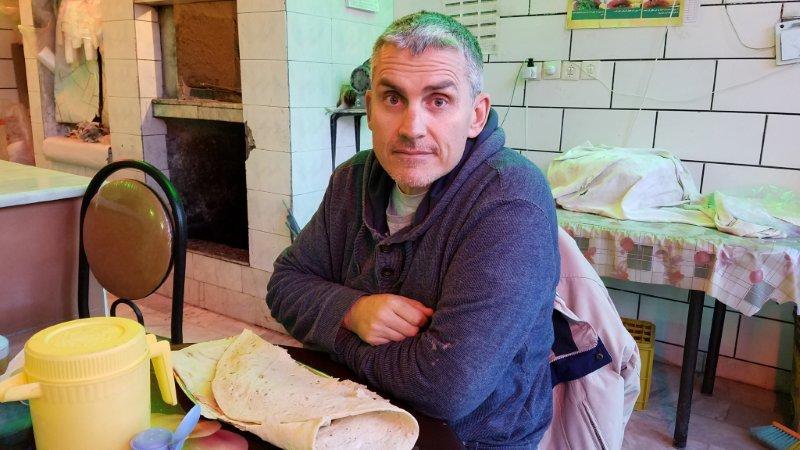 (left, that huge Iranian flat bread hides souvlaki skewers & onions.)
Brendon is now cooling his heels in Kuala Lampur after trying
unsuccessfully to find political asylum and anti-Zionist work in Iran.
He needs to raise money to return to Australia where he plans
to challenge the "racial vilification" law that landed him in jail
for three years.
Brendon's case is simple - he upset a Jewish guy who was "offended". From that interaction at a political rally, which the Jewish guy freely attended, Brendon spent three years in jail. He had his arm broken and was beaten unconscious. The arm was untreated and the beating covered up. Israel intervened in the case, against him naturally.
By Brendon O'Connell
(henrymakow.com)
I returned from Iran a little disappointed but happy, hitting Kuala Lumpur international airport on Monday, 30th of January. From chilly Iran to hot and humid Malaysia. I was glad to be out of there.
There were many opportunities to be had but I was not prepared to make compromises. While I accept I had to alter my style and presence to become more palatable and move from bar room brawler to semi-respectable suit wearer, I could not deal with the lawyer [ostensibly supporting me] and his obvious resistance to the two subjects I live for - Israeli Intelligence activity the world over, and Jewish racial and religious supremacism as the foundation for the Israeli state.
This "foundation" explains the often barbaric treatment of the Indigenous Semites of occupied Palestine. These topics were not negotiable. I fought with the lawyer for three weeks about this. Finally he organized with the Persian Gulf Studies Center to get together and organize a conference. I had told him if he kept trying to divert me away from these subjects I would walk. Exposing Orthodox Judaism, The Talmud, Shulkan Aruk and Kabbalah seemed to strike fear in his heart.... But he constantly gave me stuff to keep me from pestering him about the conference - Galaxy S7 Edge, high end video editing laptop, Sony Tablet etc. I walked away from a privileged panda bear type existence with all the sugar cane I wanted - I didn't want it.
Perhaps I should have just sulked away to a backpackers and chilled out by trendy Tehran university but in the end I just decided to leave.
IRAN - THIRD WORLD COUNTRY WITH BALLISTIC MISSILES
In the two and a half months I spent there, it would seem it either changes or it dies. The Revolution was always reactionary and justified, but a reactionary change must settle into something else. If it doesn't, it's not home grown and it will always be a product of someone else poking you from the outside. Iran is in fact a cornered snarling dog with a bone it does not want to give up. Understandable, but it needs to relax. Those centrifuges are not theme park rides and trust me, they are not for a nuclear powered electricity plant. Iran has the second largest gas reserves in the world.
Iran must open up. It needs to relax. No easy task. It cannot beat the President of the United States Bi Bi Netanyahu and the high tech US military - it cannot do it. But it can accept that it has a vast amount of support around the world both grass roots and in the managerial class.
People want to trade, Boeing wants to sell Dreamliners and 65-year-old retirees want to go to Isfahan for a cheap silk Persian rug. How to combine Iran's ancient culture with its successful reactionary blocking of the worst of the "liberal" west, and a high technology future, is difficult task, but I think Malaysia is a good place to start for hints in that direction - however imperfect Malaysia might be. It sure beats being a ZOG occupied wannabe United States, or a glowing pile of ash.
-----
Brendon O'Connell is seeking to go to the High Court of Australia and return  home. He must gain legal advice and he must survive in Malaysia until then. A successful High Court appeal will see dangerous sections of the various racial vilification legislation in that country rescinded. This is the same legislation that certain powerful political elements seek to push on the American people and others. This is an important case and it needs to be done right. Please consider donating to - PayPal, [email protected] and Bit Coin - [email protected] boc.rocks. Encryption available.
Flashback- Out of Jail!
Afternote:

Perhaps I should have mentioned Henry I had a three month extension to my visa while I awaited the processing of my application. Here's a screenshot from lawyer asking if I was going to get the stamp.

I have nothing against the Iranian government. I have no doubt they would have granted me asylum and given me a job at Press TV if I changed my style and wore a suit. The lawyer ended it for me.

Time to settle down, end the ranting and allow the legal process to take hold. Something good and powerful will come of it.

I might add the prosecutor agreed "Jews" do not fit the legislation. Everyone agreed. But I was to fuming with the harassment to take advantage of it - that's why I was being harassed.

If people can assist Henry, even if it's pushing my blog, YT channel. It would be greatly appreciated.

This is not an open ended plan. The last eight years is being bought to a close. The most embarrassing rants removed.

Many thanks for your support over the years.