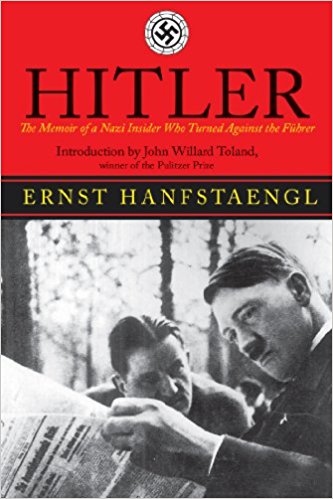 (left, Hanfstaengl conferring with Hitler )
Ernst Hanfstaengl's 1957 memoir
offers insights into
Hitler's character and goals.
Hitler was cognizant of his role in the plan
to murder millions of Jews in order to justify
the creation of the Luciferian world capital, i.e. Israel.
by Henry Makow Ph. D
As you know, I believe Adolf Hitler was false opposition. His mission was to lead Germany to war and destruction, kill 60 million goyim and establish the state of Israel. Thus, he is a critical piece in the NWO puzzle.
A German-American, Ernst "Putzi" Hanfstaengl (1887-1975) was Hitler's confidant beginning in 1922 and as Foreign Press Secretary from 1931-1937. He was a pianist and often soothed Hitler's nerves after a long day. His memoirs contain a few nuggets of little-known information.
For example, Hanfstaengl reports that In 1934, he was approached by a leading New York Jewish lawyer, Max Steuer, with a proposition from "some wealthy members of the American Jewish community as the Speyers, Warburgs and others." They proposed to finance the emigration to the US of all those German Jews, including recent immigrants, who wished to leave.
Hitler's "response appalled me: 'Mein lieber Hanfstaengl. The die is cast. Events are taking on a quite different shape.'
"But herr Hitler,  I protested, this is our finest chance to deal with an insoluble problem. "
"Do not waste my time Hanfstaengl," he answered sharply. "I need the Jews as hostages." (pp. 210-211)
If German Jews were "hostages" what was the ransom? None was proffered during the war. Israel was the ransom. Hitler was cognizant of his role in the plan to murder millions of Jews in order to "justify" the creation of this Luciferian world capital. The bankers knew their offer would be declined.
WERE SOME NAZIS SABBATEAN FRANKISTJEWS?
The Sabbatean-Frankist Jews were satanists (Cabalists) who were the progenitors of the Illuminati, i.e. Zionism, Communism (including Neoconservatism & Neoliberalism) and the NWO. They hated Jews who believed in God or who wished to assimilate. They intermarried with non-Jewish satanists -so technically they were half Jewish. Victor Rothschild or John Kerry are examples.
Hanfstaengle quotes a Jewish friend, Rudolf Kommer, a brilliant Jewish Austrian writer connected to the Illuminati bankers in NYC.
In 1922, Kormer warned: "There is only one danger. If any political party emerges with an anti-Semitic programme directed by Jewish or half Jewish fanatics, we shall have to watch out. They would be the only people who could put it over." (p.31) 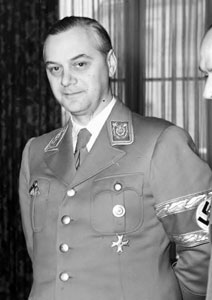 Hanfstaengl's response: "How right he was time was to show."
Hanfstaengl describes the chief Nazi ideologue, Alfred Rosenberg, (left,) as  "a sallow, untidy fellow, who looked half Jewish in an unpleasant sort of way."
"Rosenberg was distinctly Jewish in appearance, although he would have protested furiously...I used to see him with...a Hungarian Jew...who was another of these Jewish anti-Semites...I suspected the Aryan background of many of the others. Strasser and Streicher looked Jewish to me, as well as later figures like Ley. Frank and even Goebbels would have had difficulty in proving their pedigree." (81)
He describes Herman Goering "as one of the few unmistakably Aryan members of Hitler's entourage, [and he] was the least fervent exponent of their racial theories." (110)
CHURCHILL
In April 1932, Winston Churchill, then in opposition visited Munich. Hanfstaengl met him and was astounded when Churchill asked him:
"How does your chief feel about an alliance between your country, France and England."
Hitler was actually staying at the same hotel but refused to meet Churchill.
"I have too much to do, Hanfstaengl. I have to get up early in the morning," and he evaded me and walked out. (187) 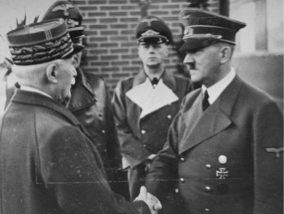 (Masonic handshake- Hitler's thumb on Marshal Petain's knuckle)
My view is that as Freemasons, Hitler and Churchill were in cahoots. Hitler didn't have an appetite to keep up the charade in a meeting.
"In any case, what part does Churchill play?" Hitler complained. He is in opposition and no one pays attention to him.
"People say the same thing about you," I answered nettled. But it was no good. He had made up his mind not to expose himself to anyone with the capacity to steal his thunder. (187)
HITLER A SEXUAL MISFIT
Hanfstaengl had a close up view of Hitler for 15 years and concluded the man was impotent sexually. He followed the homosexual pattern of hating his father and adoring his mother. Magda Goebbels tried to introduce him to women but these women all threw up their arms in despair. Hanfstaengl partly attributed Hitler's erratic behaviour to his "sexual derangement."
"I had formed the the firm conviction that [Hitler] was impotent, the repressed masturbating type...An impotent man with tremendous nervous energy, Hitler had to release this tension somehow. He was in turns sadist and masochist, and in the sexual half-light of his life, he never found physical release..." (124) 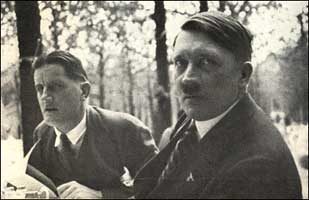 In general, Hanfstaengl tried to exercise a moderating influence but "the experience of power [turned Hitler into] an irreconcilable fanatic. It took me most of 1933 to realize that the demon had entered into him." (213) Increasingly isolated and out of touch with the world, he withdrew into his own megalomania.
Hanfstaengl's assessments of Hitler's henchmen are prescient. "Goering was a complete child, no fool and not a man too be trifled with, but conscious deep down that he was only a facade and could only maintain his position by bluff." (229)
Goebbels   was "the evil genius" of the second half of Hitler's career. " I had always likened this mocking, jealous, vicious, satanically gifted dwarf to the pilot fish of Hitler's shark. [He] finally turned Hitler fanatically against all established institutions and forms of authority." (224)
In 1937, Hanfstaengl got wind of a plot to murder him and fled to Switzerland. He resisted many pleas to return to Nazi Germany, and spent a few years in detention camps in England and Canada before his value was recognized. He was an articulate, sophisticated and civilized man who attempted to prevent Hitler from veering into barbarism. Hitler used him to give his regime a civilized veneer. He was not aware of Hitler's true agenda.
----
Related- How Hitler Sabotaged War Effort
---------------  Hitler a Traitor?- Testimony of Closest Aides
-----------------Hitler's British Handler
-----------------Did Jews Help Plan the Holocaust?

I always enjoy reading your website as I know I'll be learning something worthwhile. Well, your Hitler story for today has caused me to be rudely kicked off the internet 4 times this morning! This piece must be very damaging to the elite. I read your site regularly and I'd say I get kicked off the internet maybe once ever two weeks by coming to read your site. Today is an exception. Today's post is a keeper for sure.