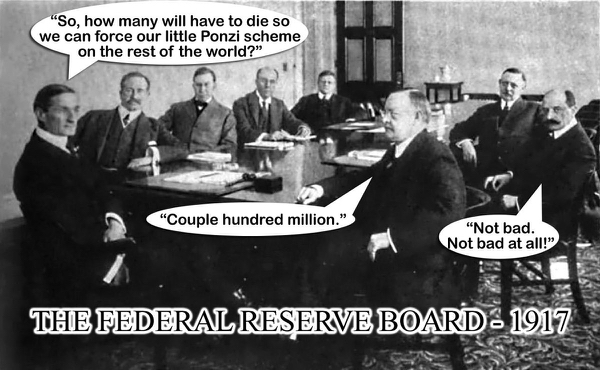 War is a racket.

In his 1912 book, Philip Dru, Administrator, Colonel Edward Mandell House has a character say of the US Civil War: "Cynical Europe said that the North would have it appear that a war had been fought for human freedom, whereas it was fought for money."

It was fought "for money" but not in the sense of accumulating it. Like the US Civil War, many wars are fought to force all nations to accept the Rothschild credit monopoly.

"Money" is virtual, a mental concept, an accounting system. Our currency is like a coupon. Money is a medium of exchange. The Central Banking Cartel creates it out of thin air, as a debt to itself, something our government could do interest and debt-free. But our government belongs to them, not us. The aim of the New World Order is to expand this racket into a total political, cultural and economic monopoly. This is the real meaning of Communism. This is why our national, racial, religious and gender identities will always be under occult assault. 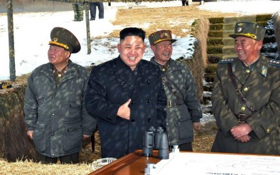 (Both Trump and Kim Jung-Un are Freemasons.)

In this excerpt from The Unseen Hand (1985) Ralph Epperson described how the bankers started the American Civil War to force the US to accept their bank. Our society is being consumed by a cancer. A faction of every religion, nation or people has been infected. They have gone over to Satan and assumed the identity of their group. They are Freemasons, i.e. opportunists and traitors willing to enslave us for personal advancement. We have been unwittingly inducted into their multifaceted satanic cult, i.e. Freemasonry, Jewish Cabalism, and are becoming their mental slaves.

In 1909, Paul Copin Albancelli wrote: "Masons repeat what they have heard from the preachers of the Occult Powers: the journalist ..the publisher..the pornographer...the professor...The state of mind created and filled in the lodges..is the profane medium met everywhere and the mind is altered by it. And as Freemasons perform this duty as propagandists without revealing themselves as Masons, the activity which they exert is not recognized as Masonic." ("The Jewish Conspiracy Against the Christian World"  pp.173-174)

But this knowledge should be liberating. They cannot dupe us when we understand the true nature of our predicament.

"According to John Reeves, in an authorized biography entitled The Rothschilds, the Financial Rulers of Nations, a pivotal meeting took place in London, in 1857. It was at this meeting that the International Banking Syndicate decided that (in America) the North was to be pitted against the South under the old principle of 'divide and conquer.' This amazing agreement was corroborated by MacKenzie in his historical research entitled The Nineteenth Century." 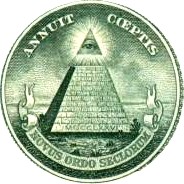 (Masonic logo on US currency.)

The plotters realized that once again the American people would not accept a national bank without a reason for having one, and once again the plotters decided upon a war. Wars are costly, and they force governments into a position where they must borrow money to pay for them, and the decision was made once again to force the United States into a war so that it would have to deal with the issue of how to pay for its costs. ...

The bankers first had to locate an issue to use in causing the southern states to secede from the United States. The issue of slavery was ideal. Next the bankers had to create an organization that could promote secession amongst the southern states so that they would divide themselves away from the federal government. The Knights of the Golden Circle [Freemasons] was created for that purpose.

Abraham Lincoln began to see the drama unfold as he was campaigning for the Presidency in 1860. He saw the war as an attempt to split the Union, not over the issue of slavery, but just for the pure sake of splitting the Union. He wrote: "I have never had a feeling politically that did not spring from the sentiments embodied in the Declaration of Independence. If it (the Union) cannot be saved without giving up that principle, I was about to say I would rather be assassinated on this spot than surrender it." 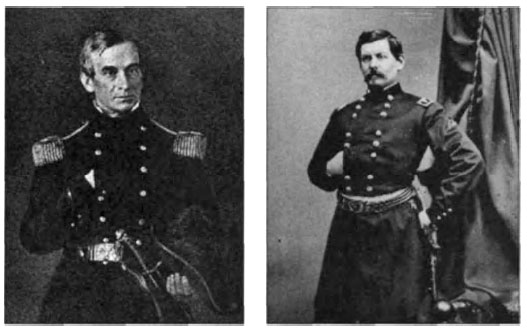 U.S. Civil War officers displaying the Masonic sign of the brotherhood of Jahbuhlun. Left is Major Robert Anderson of the Confederate Army and at right is General George McClellan, Union General of the Army of the Potomac.

The Knights of the Golden Circle were successful in spreading the message of secession amongst the various Southern states. As each state withdrew from the United States, it left independently of the others. The withdrawing states then formed a Confederation of States, as separate and independent entities.

The independence of each state was written into the Southern Constitution: "We, the people of the Confederate States, each state acting for itself, and in its sovereign and independent character..."

This action was significant because, should the South win the war, each state could withdraw from the confederation, re-establish its sovereign nature and set up its own central bank. The southern states could then have a series of European-controlled banks, the Bank of Georgia, the Bank of South Carolina, etc., and then any two could have a series of wars, such as in Europe for centuries, in a perpetual game of Balance of Power politics. It would be a successful method of insuring that large profits could be made on the loaning of money to the states involved.

Eleven southern states seceded from the Union to form the Confederacy. But in a rather enigmatic move, the flag adopted by the Confederacy had thirteen stars on it. As mentioned before, the number thirteen has significance to the Freemasons. ...

Abraham Lincoln, now President of the Northern States, once again reported to the American people that the war was a result of conspiratorial forces at work in the South. He told the North that: "combinations too powerful to be suppressed by the ordinary machinery of peacetime government had assumed control of various Southern states." 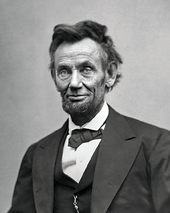 (Good and honest leaders are shot down)

Lincoln was receiving great pressure from certain of the banking establishment to float interest-bearing loans to pay the costs of the war. Salmon P. Chase, after whom the Chase Manhattan Bank, owned by the Rockefeller interests, is named, and Lincoln's Secretary of the Treasury during the Civil War, "threatened the (rest of the) bankers that, if they did not accept the bonds he was issuing, he would flood the country with circulating notes, even if it should take a thousand dollars of such currency to buy a breakfast."

So Abraham Lincoln decided not to borrow money from the bankers nor to create interest bearing money by creating a national bank that would loan the government the needed money by printing large quantities of paper money. Lincoln issued the "Greenback" in February, 1862.

This money was not only unbacked by gold, but was debt free. Lincoln was playing a deadly game. He had crossed the international bankers. The war was being fought to force the United States into a position of having to create a national bank, run independently by the European bankers, and Lincoln had turned his back on them by issuing his own Fiat Money. 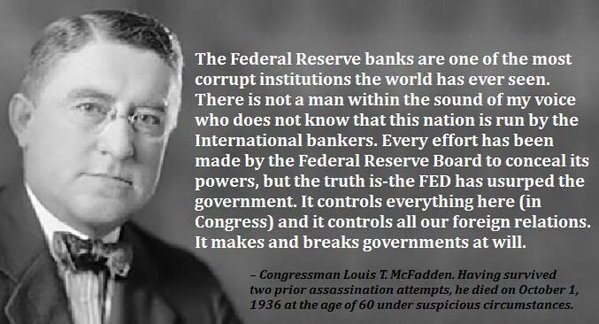 Related - The Fraud that Begets all Others

While the church helped anyone in need, jewish authorities not only done almost nothing to help jews but kind of forced the nations under their spell not to help neither.

The Chief Rabbi of Rome, Israel Zolli, was so impressed about Pius XX efforts to help jews that in the end of the war he converted to catholicism. While being baptise, he changed his name from Israel to Eugenio Zolli, in honour of the Pope.

Most jewish authorities thanked Pius XX and the church for the constant aid of jews; people like Einstein, rabbi herzog, dr leon kubowitzky from the world jewish council, rabbi shafran chief rabbi of Romania and many world jewish organizations, including some jews who lived in camps and saw and felt the churches aid (more "holocaust survivors who didnt die ); even the b'nai b'rith showed gratitude.

Funny how all these jewish personalities and organizations never mentioned "a jewish holocaust".
Interesting to note that every single jew who was allowed to leave germany from 1933 to 1939 were and are considered a "holocaust survivors", although NONE OF THEM saw a concentration camp, were never harrassed nor were persecuted. I have seen many interviews of jews stating the most atrocious lies possible.
People are ignorant of the Transfer Agreement, where the nazis received an amount of money for every jew who went to palestine(this is the reason why no one helped out of germany - only the wealthy managed to migrate); a medallion of this agreement was produced, one side having the nazi symbol and on the other the seal of solomon (never David's star).
People also ignore The Morgenthau Plan which I know you know about it (i know u also know everything i wrote above).

Details are always very important when analyzing historical events.
Hitler never said he wanted to go to war; he just wanted back what germans lost with the criminal decisions of the Peace Conference.

Hitler never said he wanted to exterminate all european jews. In fact, the term Final Solution came from the new york jews in 1933, when they got to know hitler was in power and ready to damage jewish positions in government, public positions, in education and in the media. This shows how satan reverses everything and in many cases uses projections...accuses others of what they themselves are responsible for. So next time you see or read an accusation directed to the catholic church, you now know that the accuser is the culprit or supports the culprit(s).

A great way to stick to the Central Bankers is not to use their ruse at all. Bartering & using CryptoCurrencies such as BITCOIN are a great way out but are still in it's infancy. Many people have become millionaires by just having been on the bandwagon early.

As for (Good and honest leaders are shot down) ? Abraham Lincoln was a (Springsteen) bloodline Rothschild scumbag himself; He just didn't want to share America with the rest of his family in Europe. There's no honor among thieves. Same time he came out with the Emancipation Proclamation, he ordered the greatest mass hangings in US history of 303 men; Their crime was being Native and hunting in their ancestral lands.

Henry, you have wisely stated over the years that one of the main purposes of war is to kill off society's fittest young men. For proof of this, one need look no further than this latest statistic:

"70 percent of today's youth are not fit to serve in the military due to obesity or being overweight, criminal records, drug misuse or educational deficits." Paul Bedard, Obesity epidemic at new high, costs $150B a year, hurts military recruiting, Washington Examiner, September 1, 2017 referencing the 14th annual State of Obesity: Better Policies for a Healthier America report

It's amazing how prophetic Aldous Huxley was back in 1961:

"There will be, in the next generation or so, a pharmacological method of making people love their servitude, and producing dictatorship without tears, so to speak, producing a kind of painless concentration camp for entire societies, so that people will in fact have their liberties taken away from them, but will rather enjoy it, because they will be distracted from any desire to rebel by propaganda or brainwashing, or brainwashing enhanced by pharmacological methods. And this seems to be the final revolution." -- Aldous Huxley, Tavistock Group, California Medical School, 1961

Reality is actually worse than any science fiction horror movie ever made.