The "Right" is Zionist Controlled-Opposition 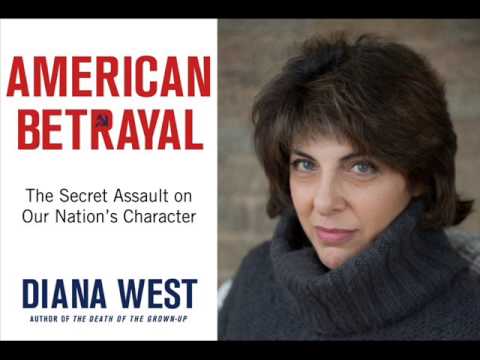 (Anti Communist Jewess, Diana West)
Why Conservatives Have Any Voice at All
Conservative nationalist voices are still heard
in order to create an illusion of political freedom,
and sanitize opposition to Communism by erasing
its connection to the central bank cartel,
Organized Jewry, Judaism, Satanism and Freemasonry.
by Henry Makow PhD.
Diana West has written a new book, Red Threads which traces the Marxist background of many of the principal players in "the anti-Trump conspiracy" such as James Comey.
In books like American Betrayal, The Secret Assault on Our Nation's Character (2013) West has done invaluable work exposing the Communist subversion of America. She is rare among conservative writers in that she receives some exposure in the mainstream media and support from foundations. Why? She is a Zionist.
Virtually every nationalist and conservative who receives recognition anywhere is a Zionist. As I said, their role is to keep
the satanist Jewish (Cabalist) character of the attack on Christian culture out of mainstream consciousness. She makes this point herself in an article about the growth of antisemitism in Europe:
Notably absent from these appalling outbursts are representatives of the "right-wing extremist" parties. Communists, Anarchists, Socialists, and various and sundry other parties of the Left are well-represented among the supporters of Hamas, and occasionally join in with the "back to the ovens" Jew-hating chants. But the "neo-fascist" parties are not involved. You won't find Dansk Folkeparti (Danish People's Party), or Sverigedemokraterna (Sweden Democrats), or Partij Voor Vrijheid (Party for Freedom) amongst them.
Here she is full-blown in her role as a Zionist Jewish apologist:
It only took PBS one hour to uncover the causes of anti-Semitism, now in an alarming heyday. In "Antisemitism in the 21st Century: The Resurgence," narrated by Judy Woodruff, PBS offered the answer: The reason for Jew-hatred, now widely promulgated among Muslim populations, is, well... Jews! Israel! Even Christianity! Oh, brother. This wreck of a thesis emerged early in the documentary as fact and fiction collided, mangling cause and effect. According to the show, Jews basically caused anti-Semitism in the Arab-Muslim region around them by first building the tiny modern state of Israel (500 times smaller than that Arab Muslim region), and then actually trying to defend it against a host of Muslim armies and terror groups. As PBS tells it, it isn't the genocidal proclivities of surrounding Muslim nations that have caused war unending on the Jewish state; it's the continued existence of the Jewish state that has caused the genocidal proclivities. The show practically begs a viewer to ask, Well, what else could you expect?
Political discourse is organized along left-right lines by the Rothschild banking cartel. Both are Masonic. Left is Communism, globalism, diversity, satanism. Right is Zionist, nationalist, ostensibly Christian and traditional. Both advance the central bankers monopoly over wealth, power and thought using a Hegelian dialectic.
The electrified third rail of politics today is any mention of Organized Jewry, Freemasonry, Judaism, Jews or Jewish bankers.
Helping Diana launch her new book was Chris Farrell, from Judicial Watch which does excellent work exposing the Clinton crime apparatus and the Communist agenda in general. But I was disheartened to see they also defend Zionist power, attacking Rep. Ilhan Omar.
Nevertheless, Farrell got banned from Fox for so much as mentioning that George Soros was bankrolling the migrant invasion from Mexico.
The article from the Washington Examiner goes out of its way to remind us that the Protocols of Zion are bogus.
In 1903, a fabricated text, The Protocols of the Elders of Zion, purporting to contain the details of a Jewish plot to take over the world, was published in Russia. Although the exact origin of the text was deliberately obscured, it likely developed just after a Russia Zionist Congress and around the beginning of the latest round of anti-Jewish pogroms in the Russian Empire, which destroyed Jewish communities with thousands killed or forced to flee. Since then, it has become a core anti-Semitic text. In the 1920s it was reprinted in the United States by prominent figures like Henry Ford, who funded the printing of 500,000 copies. When the Nazis came to power in Germany, the fraudulent document was used as propaganda against Jews. Today, that document still circulates on the Internet, and along with it, a series of other anti-Semitic writings alleging a Jewish plot to control governments, media, and money.

Wake up, slaves! The Protocols of Zion are 100% genuine. The mass media and political discourse, in general, are largely controlled by money. Money is controlled by the Satanist banking cartel.
Tucker Carlson is a darling. I love him. He has the highest-rated show because he defends the interests of the white Christian American heartland.  He is one of the few sane political commentators left. But for all the good he does, do you think he would last a minute if he mentioned the Masonic Jewish conspiracy?
Not a chance. Wittingly or not, the role of the right is to suppress the fact that humanity is under vicious attack by Satanists who have infected the bloodstream of society through their control of banking.
Controlled opposition is why they sponsored the John Birch society, and even Sen Joseph McCarthy.  Of course, Trump also falls under this rubric of Zionist-sponsored nationalism.
Humanity is held in a dialectical vise -- with satanic totalitarianism on the one hand and Christian tradition and freedom allowed by the same mugs on the other.
We have learned the hard way, that if we don't control money creation, we are enslaved of those who do.
----------
Related - Trump & the Masonic Jewish Tag Team    i.e. Communism & Zionism
-----------Insider: Is Trump Family Cult Behind Coming Armageddon?
----------------------

Comments for "The "Right" is Zionist Controlled-Opposition"

There is one deep state against another one. Christians have been too much cretinised by their priest
and are no longer able to govern themselves.

Sad that Trump had to pick one side of the Jews, that being Benny SatanYahoo and the Likud party to stay alive.

What's still in question here is that who is controlling American Foreign Policy? Unfortunately for America both the Soros Democrats (NWO) and the Netanyahu Republicans(Neocons). This is troubling to our allies and leaves American Foreign Policy incoherent to the world.
My guess is that the Republican Party will continue to diminish and eventually fall to the Soros camp like most of Democrats did. Its already happening with more Republicans turning on President Trump.

Israel will also lose a lot of influence in Congress once the Neocons are gone but there might be a better chance for peace in the Middle East when this happens.
Not even Netanyahu can thwart the NWO.