Why The Illuminati Burned Notre Dame 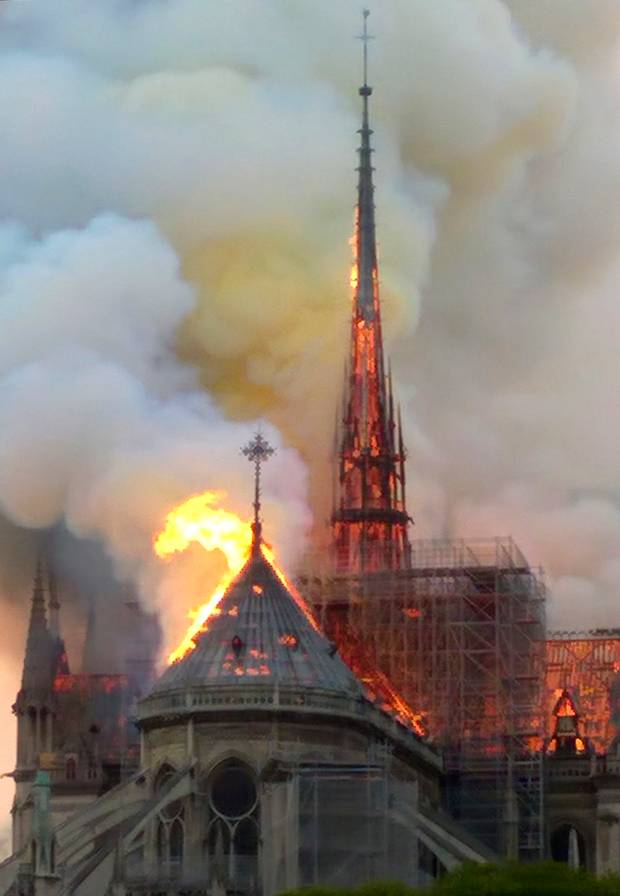 Illuminati Satanists burned Notre Dame Cathedral purely for its symbolic value.
The Cathedral represents a celebration of God.
by Henry Makow PhD
It's not just the Cathedral that needs to be rebuilt, but also Western civilization, which is based on belief in God. Society, philosophy and the arts have all been debased by the Satanists.
Individually and collectively, humans are lost and condemned to suffer without God who is our compass and our comfort. Western civilization is based on the belief that  God speaks to us through the soul.
God is the Moral Order governing human life.
God cannot be encapsulated, but as far as human behavior is concerned, God is Consciousness, a spiritual dimension in which ideals like Beauty, Truth, Love and Justice are self-evident.
Western civilization is based on a dedication to realizing these spiritual ideals.  True culture, as opposed to popular culture, is an expression of these ideals.
The brilliant philosopher and historian  E. Michael Jones calls this Moral Order  "Logos," the Soul of the Universe, the Mind of God.
To rebuild the Cathedral in meaningful terms, we need a re-dedication to God, a refusal to be silenced. We need to reprogram ourselves to make God the focus of our thoughts, the center of our lives.
Human souls were sent from Heaven to create heaven on earth.
Made in God's image, we must constantly strive to ennoble ourselves.
What would God find pleasing? How can we serve God? Choose a path. Truth. Beauty. Love. Justice.
God is the Blueprint, the Ultimate Reality. Truth cannot be evaded.
God is the common element that unites us all.
Satanists hate God. People who obey God are harder to degrade and control.  Satanists want to take His place and enslave humanity. They are in charge; but, nothing scares them more than a mass return to God.
Every day, let us obey God and thank Him for the Miracle of Life on Earth.
Note! Religious statues were removed from the Cathedral one week prior to arson and decapitated!
Related- Why We Can't Talk About God
--------------- Self-Restraint is 9 /10th of Worship
----------------Rabbis Celebrate Burning as Talmudic Vengeance
-----
First Comment by George
The attack backfired badly.
1. The obviously pre-planned aerial photo of the church showed a magnificent burning cross.
2. The cross in the apse survived triumphantly.
3. The paired statues of the Church (Ecclesia) and Jewry (Synagoga) on the facade remained undamaged, as did the whole facade.
4. The donations promised from French establishment donors were mysteriously withdrawn, probably under whispered threats from the Illuminati perpetrators. But the world has united in defense of Notre Dame, and there is now much more money on hand than the cathedral needs.
5. The French parliament voted overwhelmingly to restore the cathedral to its "last visible form" meaning no New-Age Masonic remodelling like the glass pyramid in front of the Louvre. The nineteenth-century spire added by Viollet le Duc is included in this formula, because of the obvious reverence shown to the Cathedral by that great Frenchman.
6. The most holy relics of the Cathedral were saved.
In short: Vive la France! Long live the Christian faith! Long live a monument sacred not only the France and the Christian faith, but to the faithful to God around the world, regardless of how they view God! Another defeat for Satanists.

Comments for "Why The Illuminati Burned Notre Dame "

Hey Henry, you don't know me but I have been following your website for awhile and would like to chime in. You always try to describe God by Who He is --

I love Christ but I think the world can unite around God, but can't agree on Christ, even though we do.

The whole thing with the Notre Dame burning and the beheading of the statutes was an attack on the Church (in particular all Catholics around the world and in general all Christians around the world) and not God per se ... God is not hurt in any way because of some building being burnt and some statues being beheaded.

This was a message to all Christians that they better be ready for a post-Christian world because it's fast approaching.

PS. It's interesting to note something that was totally under-reported in the Western media ... on the same day a very important Mosque burned down in the Middle East. How I see the message to all Christians and Muslims around the world was it's time to prepare for your faiths to be engulfed by the 1 World Luciferian religion that Pope Francis and most other corrupt Christian leaders, as well as most corrupt Muslim leaders, are preparing their followers for.

Europe is still in the process of being de nationalized and what is more defining to French heritage than the Catholic Church.

The heroism of Joan of Ark and her closeness to the Catholic faith no longer defines modern France with it's new generation of European socialists. Multiculturalism is tearing away at French culture and nationalism only seems to happen on WW2 celebrations.

The "free world" is no longer free but is now a prisoner to the idol of a Golden Calf that has been put in their hearts by the bankers who control their money.

The New Age philosophy believes in money first and then religion. What happened to Christianity where God and salvation are first? Christianity was not intended to be a suit and tie rich man's religion. Christianity is for the humble and the meek who are rich in spirit and not rich in material possessions and bank accounts.

We've allowed ourselves to be deceived and corrupted and this will not have a good ending.

I should have liked to read Jesus Christ, at least once, in your otherwise perfect call to the awakening of the Christian masses, which is taking place all over the world
- China, South East Asia, South America - even the Australians are coming back to the Gospel of Jesus Christ our Lord.
--

The Cathedral is a Christian monument.

Notre Dame Cathedral may be an attempt to create a structure that embodies the harmony of outer space, so as to help create that inner tranquility within people. Inner tranquility is associated with long life.

The loss of structures, and words, that connect us with the harmony of outer space has resulted in people being reduced to a state where their minds have too much stress and their worlds are filled with too much human bickering. Naturally this has resulted in a reduction of life span in the USA.

The way to purify our personal environments is to be careful what we read, what we speak, and what we listen to. Also architecture can play a role in protecting us from the forces of chaos, chaos which is antithetical to logos.

The force of chaos is the force of entropy and decay within the universe. Logos is similar to a crystal in that it helps create that tranquility which is part of long life and well being.

America needs to "clean its mouth out with soap" so to speak.

Satan represents anti-logos, the forces of chaos that cause entropy and decay. All of religion is designed to protect us from Satan.

A free audio of Timaeus is here
https://librivox.org/timaeus-by-plato/