US Cast as "Great Satan" in Coming Apocalypse

E Michael Jones tells the Iranians that the US electoral system is owned by the Jews. ( It is operated by their social Masonry - this must always be said ). Indeed a private Jewish bank owns the entire apparatus of government. It is a ZOG. This is not a government that is in any way answerable to Americans.

"According to this mind meld and in the eyes of the goyim, every American institution subverted by the Judaic Supremacy and its Social Masonry must fail.  And it must be seen to fail. Not only is the entire apparatus of ZOG West owned by a private banking cartel and its entire economy based on usury [monetized debt], the political / governing class is supervised by a demonic cult: the Chabad Lubavitch.  The same outfit that supervises ZOG East."

but the Strength Comes From Heaven"

If Netanyahu is tweeting that US-Israel friendship is at 'an all time high' , I think the goyim on the ZOG plantations can assume that the Soleimani murder has begun the countdown to war with Iran.

The Owners of  ZOG West have scripted their Political Elite to take up the Great Satan position.

So.  ZOG West is now stage centre as the Evil Incarnate.  Everyone gets this. Whereas, ZOG East, as we should all know by now,  has the good goy, 'Defenders of JudeoXian Civilization' script in the upcoming blockbuster.

While listening to the daily blah-blah and yada-yada, both the bonded entities and the valued social capital  should not rule out the possibility that it was our greatest ally, best bud and world's most moral army that assassinated the Iranian general. Soleimani's many victories over GOG's Khazaria-Israel proxy terror network would have put him at the top of their list of 'must do' assassinations.

They are working according to a time frame. Soleimani was the protector of those specific demographics that GOG has decided must be eliminated from the Khazaria Israel domain.  This consists of ( but is not limited to ) populations which are not 'Noachide' material : Muslim populations that do not hew to the Wahabist/Sunni version of Islam, Christians, tribals, Yazidis, Zorastrians, Armenians, Kurds - long list of things to do for IS and its alphabet soup while ZOG West prosecutes the 'no-win'  war against the seven nations GOG wants regime changed.

And ZOG East protects the Muslim states which are onboard with Khazaria Israel. 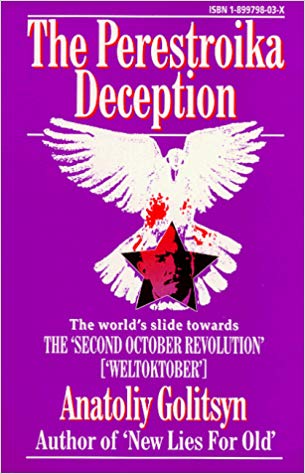 Not in the frame, however, and well  behind the Schmo Screen is Perestroika and the Perestroika objectives for ZOG East - post the feigned collapse of their soviet system.

This is why the work of Soviet defector Anatoliy Golitsyn: The Peretroika Deception (1995 )  is worth re-visiting or reading for the first time as this debacle plays out.  It is more important than any Western mediawhorejob political analysis over the latest outrage or Trump Derangement. A big thank you to FitzPatrick Informer for the late great website devoted to this subject which he now continues on Twitter. https://twitter.com/fitzinfo?lang=en

The creation of covert terror network under the cover of a 'collapsed' soviet system is one of the Perestroika objectives.

In this 2003 video, the McIlhaney Report interviews Christopher Story, editor of The Soviet Analyst and editor of Anatoliy Golitsyn's The Perestroika Deception. 94% of Golitsyn's falsifiable predictions have come to pass. Perestroika means restructuring. That is 'restructuring' with the objective of convergence with the USA.

Norman Dodd , the chief investigator of the Reece Committee, also uncovered this objective.  In the course of his investigation, Dodd learned that the large tax exempt foundations operated under a presidential directive to "use our grant making power so to alter life in the United States that we can be comfortably merged with the Soviet Union." https://nosnowinmoscow.net/tag/norman-dodd-reece-committee/

Pick up Story's exposition of the Perestroika objectives at 10.55.  This is the shape of the things to come; ZOG West's war in the Middle East. 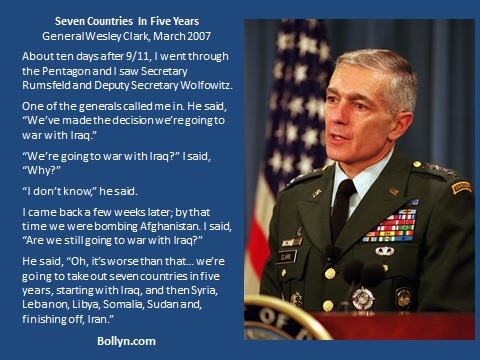 Here is General Wesley Clark on this important subject. It is not about oil. It is about the creation of Khazaria Israel.  Www.henrymakow.com was publishing on this subject a few days before the Soleimani assassination with regard to the mandated genocide of the Slavic people.  https://www.henrymakow.com/2019/12/putin-chabad.html

The situation is far worse than an impeached president goes off his head and threatens to destroy the cultural heritage sites of a sovereign nation and plunge the world into nuclear war.  Much depends upon Iran making a rational response. What exactly could that be in circumstances such as these?

According to this mind meld and in the eyes of the goyim, every American institution subverted by the Judaic Supremacy and its Social Masonry must fail.  And it must be seen to fail. Not only is the entire apparatus of ZOG West owned by a private banking cartel and its entire economy based on usury [monetized debt], the political / governing class is supervised by a demonic cult: the Chabad Lubavitch.  The same outfit that supervises ZOG East.

You're a sweet kid Henry. I don't understand why you find it hard to believe psychopaths that live on their fancy bordeauxs in France and the inner City of London plan to murder their own "Schnorrers" again, this time in Palestine while they comfortably sip wine in their castles. They've done it before and they'll do it again.

Insider George Green said the plan is to start a war in the middle East and trash Israel with neutron nukes:
https://youtu.be/JpQDwoYjGvs

New King - Eric
https://imgflip.com/i/362hyd
Linde responds to Chris G:
This is simplistic.  In the 'final cataclysm' now being set up by The Owners: ZOG West (political Zionism) and ZOG East (Soviet-Islam) are to rumble.
The Owners and Pike envision that Theocratic Zionism will emerge the victors.  Schneerson said that Khazaria Israel is what is here in view.  This means they have to remove a lot of populations in the Middle East (ZOG West got that job) and of course the hated Red-Browns : The Rus (the Slavs).
The entire Soviet system and its gulags was designed to crush them - as Solzhenitsyn says "The people who took over Russia were not Russians, they hated Russians..."  The Owners are always prepared to sacrifice the brother Jews for The Plan - they sacrificed non-Zionist Jews in WWII through their Nazi agency.
Israel is at present and in large measure secular, atheistic Jews. Their outlook is poor in Israel if Theocratic Zionism and Luciferianism (a supernatural religion) is the driving force here.
Chris G replies-
The Owners and Pike envision that Theocratic Zionism will emerge the victors???
That's not what Pike said.  Zionists are Satan's useful idiots.  The end game is to con everyone into becoming Satanists (Luciferians) after the dust settles.
Pike:"...The war must be conducted in such a way that Islam (the Moslem Arabic World) and political Zionism (the State of Israel) mutually destroy each other..."
Moreover the government of Iran is run by satanic crypto-Jews pretending to Muslim Persians.  The Shiite religion was founded by a Jew, Abdullah Ibn Sabbah, not the Prophet Mohammad.  Mahmoud Ahmadinejad admitted openly he has Jewish ancestry.
Nobody wins a nuclear war.

Comments for "US Cast as "Great Satan" in Coming Apocalypse"

“Making power so to alter life in the United States that we can be comfortably merged with the Soviet Union."

The totalitarians are going according to The Protocols! The tool with which this strategy (of merging United Stated with the Soviet Union) is being put in effect, is “War On Terror” a vague term about putting in place the “Rule of engagement” against a vague enemy. Precisely because the enemy is the people, and “War on Terror” is building of a Totalitarian Dictatorship” !

But this was not to be confined to America only, but the Whole World. So, the weaving of the Totalitarian Dictatorship had to involve making the whole Global social,political, economic, religious tapestry assume a uniform hue. The reason why, sporadic acts of terrorism has been unleashed all over! Its important to remember that one of the most successful tactics of Communist on their road to power, was the opening of all prisons, and letting to the masses holds of criminals who had nothing to lose rain terror on the hapless masses. This enables the totalitarians to pass draconian laws of enslavement, which the gullible masses accept, in exchange of “Security”

For example, Atlanta police Department new policy of “zero-chase” policy may be the deliberate use of an accident in order to put in place a communist strategy.

Man learns nothing from History. That “The best-laid plans of mice and men often go awry.” Evil always carries with it, a seed of its own self-destruction. I do not know where I heard that one from, but I am in agreement!

Your correspondent Ben M (below) is right about this. Shared awareness and shared understanding is crucial for America, for Canada, Australia, NZ and Britain , especially with the veteran community. The foundations of these nations are what is now at stake against subversion across every base of social influence. Yuriz Bezmenov goes right into this. The veterans who served our nations and the best of our Western heritage have an important story to tell. I am glad that your website is attracting their interest and contributions. What we are calling The Culture Wars would be called by the military: hybrid warfare. And in this warfare, the foundations of Western society itself have become tactical ground. I hope you will stay in touch with your veteran correspondents. There is important subject matter here that your readers will want to understand.

I have been a vocal supporter of President Trump up until this alleged irresponsible and unprovoked drone killing of Iranian General Soleimani earlier last week.

This was done for Israeli interests and not American interests. A conflict with Iran will profit America nothing. It will cost them American lives and a lot of money for nothing other than appeasing Benjamin Netanyahu and his Likud Party bosses.

Benjamin Netanyahu has been begging America for a war with Iran for years and now he is saying he has nothing to do with this. Another classic stab in the back of America to hopefully save his own skin and divert all the Iranian blowback in America's direction.

The Americans and Iranians are both fools for falling for this if they give him the conflict he wants.

That's a great piece Henry, i watched the Jones thing, when it was on your feed.

It's worked, the drone attack, my sister was arguing with me " the Iranian General sponsored terrorism, Trump had to do it, just like Gaddafi & Bin Laden."

They could care less, Trump, raped a 13 yr old kid, he's sent by God, to deliver these Zionist Christians, i just hooe he don't take all of them to Hell with him?

Great article. Probably the most critical piece I’ve read from you. For sure-Golitsyn’s scary book spells out the plan. We are truly screwed if we don’t wake up soon.

I sent you my insights yesterday from my experience on the ground in Iraq in 2011 (Irbil, Mosul, Kirkuk). Did you get it?

And your right. It’s not about oil but ZOG will use ‘oil’ as a primary pretext to dominate the space.

Additionally, the Kurd tinderbox w the Iraqis WILL BE/IS also part of the reason we will stay. It’s the land bridge from Iran to Syria & will border part of the planned Greater Israel.

PS Please know - American veterans who have lost much in Iraq, Afghanistan & elsewhere are important listeners to your work. They joined because they love their country. The Constitution & our Declaration is what we thought we served. Many of us still believe in those documents. A lot of veterans are waking up. They are not ignorant. I recommend your work to many of them every chance I get. Shared awareness & shared understanding is crucial for our country (& Canada & UK Aus NZ) right now.