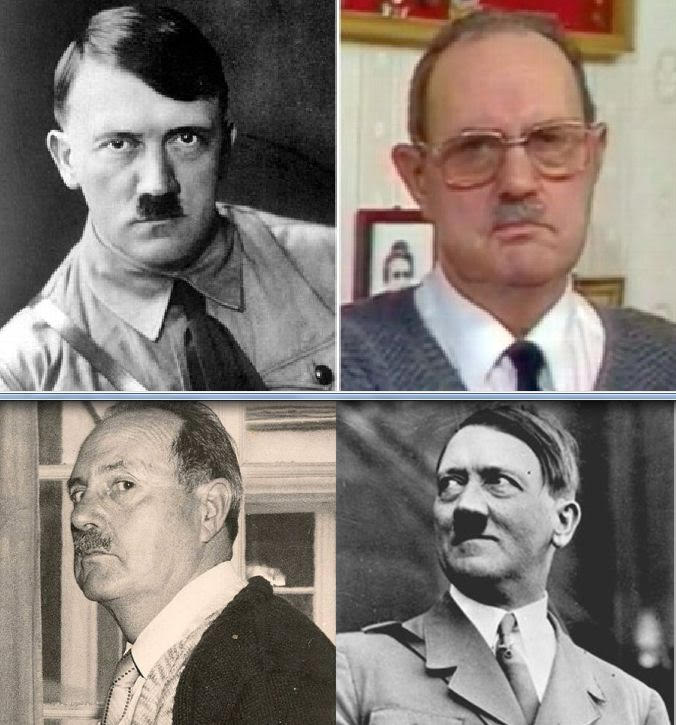 Jean-Marie Loret (1918-1985)
Amid reports that Hitler was a homosexual or
a sexual degenerate comes this evidence that he
was also a heterosexual.
by Brabantian
(henrymakow.com)
One day in early summer 1917, Corporal Adolf Hitler, age 28, on leave from his duties with the German army occupying parts of Belgium and northeast France, was sketching on his art pad near where French farm girls worked in a field. One of them, 19-year-old Charlotte Lobjoie (1898-1951), approached Adolf to ask what he was doing. For the poor farm girl, the artistically-inclined non-commissioned officer of a successfully invading army seemed interesting.
A short but intense relationship followed; Hitler painted Charlotte, his signed 'Portrait of a Lover' recently sold at auction. One 'tipsy' alcohol-fuelled evening, they became lovers. Hitler soon went back to the war, but on 25 March 1918 Charlotte gave birth to a baby boy, Jean, in Sebancourt, France. This boy, Hitler's son, eventually became known as Jean-Marie Loret (1918-1985) after taking the family name of Charlotte's later husband.
In shame at her affair, Charlotte left the baby with her parents and departed for Paris to become a dancing girl, and by 1922 had married Clement Loret, who graciously agreed to give Hitler's child his name. But support came for the boy as well from other quarters, whilst Hitler's star was rising back in Germany. A nun with German ties arranged for Jean-Marie to be sponsored by a local French family ... who suddenly owned property in Frankfurt, and could afford to send Jean-Marie to posh boarding schools.

Photo - Charlotte Lobjoie as Hitler painted her; in Paris; and later in life
Contact was lost with Hitler for a time, but Hitler's valet Heize Linge wrote of how Himmler got the assignment to find Charlotte again. As World War II began, and Hitler's armies drove into Belgium and northern France, Hitler visited places he had been during 1914-18 - including seeing French locals who knew Charlotte and Hitler's son.
German records show that during the occupation of Paris 1940-44, German officers delivered money to Charlotte for her living expenses. With some irony, Hitler's son Jean-Marie was part of the French army fighting the German invaders.
Re-united with his mother in Paris during the war, Jean-Marie Loret was told the truth - His father was Adolf Hitler, and the Nazis were even now supporting his mother. Loret struggled with the knowledge but came to terms with it, and began to tell some of his ten children from two marriages. In 1981 he published a book, 'Ton père s'appelait Hitler', 'Your Father's Name Was Hitler'.
Some of Loret's children now admit their Adolf Hitler ancestry as well, particularly Philippe (born 1956), who has multiple grand-children of his own ... so Adolf Hitler's French descendants are now in their 5th generation. 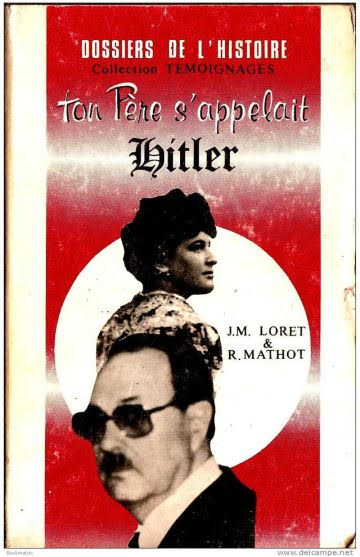 Despite striking physical resemblance, Hitler's fathering a child in France is denied and allegedly 'debunked' by some, but the 'debunking' itself raises questions, both in the way that a journalist supposedly 'gathered DNA from Hitler's relatives', and also re the alleged skull and teeth fragments of Hitler supposedly in Moscow, arriving there via a long-winded Soviet story of Hitler's body being moved multiple times and cremated twice. As we know from covid, tests and experts and so on may all be lined up whenever enough political will and money is involved.
Of Adolf Hitler's five grand-nephews living today, all are childless.
Two in Austria descend from Adolf Hitler's half-sister Angela (1883-1949), Peter Raubal and Heiner Hochegger.
The three in the USA descend from Adolf's half-brother Alois Hitler Jr (1882-1956), who married Irish Bridget Dowling (1891-1969), fathering UK-born William Patrick Hitler (1911-87) before their marriage broke up. Willy Hitler - later 'William Stuart-Houston' - moved to the USA and served in the US Navy during World War II. His sons, Brian, Louis, and Alexander, grand-nephews of Adolf Hitler, live on today in Long Island, New York.
----
Related-
https://www.thefamouspeople.com/profiles/jean-marie-loret-14616.php
https://www.dailystar.co.uk/news/latest-news/adolf-hitler-nazi-lover-painting-17126583
https://www.dailymail.co.uk/news/article-2114390/Hitlers-lovechild-D-Day-soldiers-diary-backs-claim-Frenchwoman-Fuhrers-baby.html
https://www.dailymail.co.uk/news/article-2126591/Philippe-Loret-believes-Adolf-Hitlers-grandson-French-plumber-tells-family-story.html
https://www.businessinsider.com/hitlers-descendant-merkel-trump-2018-10
https://allthatsinteresting.com/hitlers-descendants
https://www.henrymakow.com/2019/07/was-hitler-a-rothschild.html
https://www.henrymakow.com/2019/08/Allied-Central-Banks-Owned-Nazi-War-Machine.html
https://www.henrymakow.com/2014/03/FBI-Ignored-Hitlers-Post-War.html