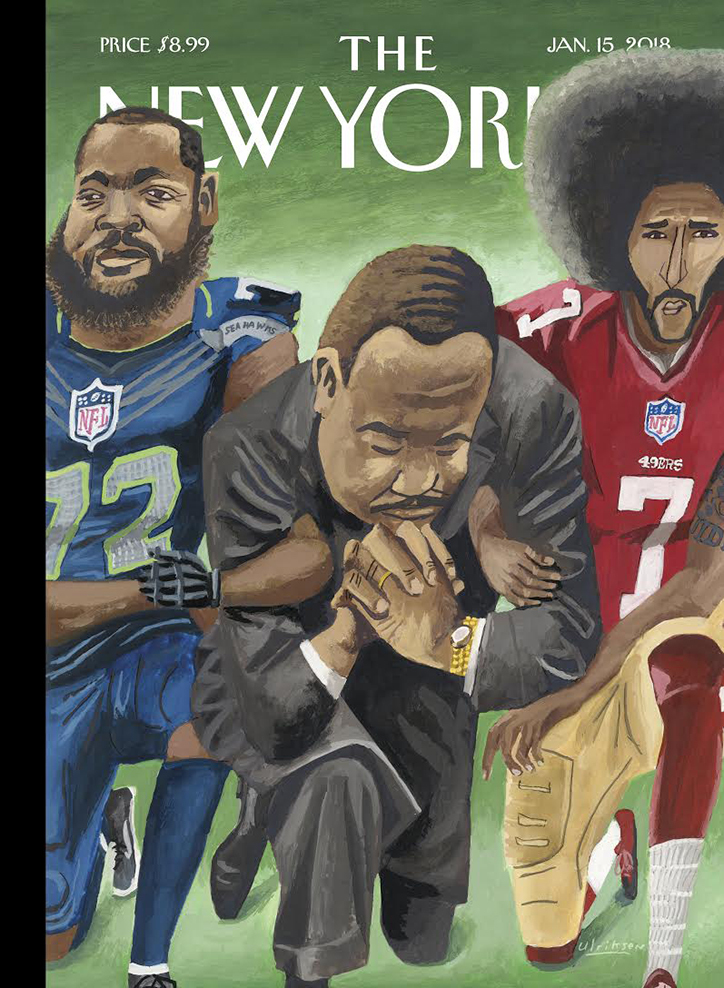 They never quit because subverting you is their religion.
(left, the Jewish owned and operated NewYorker portrays paid-Communist Party instigator Martin Luther King arm-in-arm with multimillionaire players protesting the plight of Black Americans.)
Today is Martin Luther King Day in the US. It takes an important holiday to close stock markets.
Under Biden, America is formally Communist. But the MLK holiday demonstrates that it has been Communist-controlled for a long time.
Below, Alan Stang (1932-2009) shows that King was literally a Communist agent, a philanderer, a pagan and a plagiarist. He even plagiarized the "I Have a Dream" speech. The national holiday in his name is more proof that the US is thoroughly subverted.
This holiday is another reminder that Organized Jewry is essentially Communist, and the real meaning of Communism is a monopoly over everything (incl. thought) by the Luciferian central banking cartel and its minions.
Organized Jewry (Communism) champions the underdog in order to undermine Western society. Cabalist Judaism is a corrosive acid that seeps into the fissures of society -- race, class, gender -- in order to erode it. They say so themselves. There is no genuine desire to uplift or empower the goyim. On the contrary, the agenda is to cripple & destroy Western society and rebuild it in their sad and loathsome image: The New World Order.
Open your eyes folks! Trump. Obama. Clinton. Sanders. Biden. They are all Communists.  They are all Satanists.
Related - Michael Hoffman Previously Secret FBI File on Martin Luther King released
------------- Martin Luther King was a sexual predator, newly-released FBI evidence suggests
--------------Communist Race Program for the Twentieth Century
-------------  Rosa Parks & America's Communist Corporate Elite
------------- Rockefellers Make Bail for Arrested Black Protesters
--------------Did Memphis Police & FBI set up MLK?
--------------Adam Clayton Powell Jr. Non Communists are Forgotten
from Jan 10, 2019
Uncelebrate King
by the late, great Alan Stang
(Excerpts by henrymakow.com)
There are five important aspects of Martin Luther King's career: 1) his Communist Party activities; 2) the violence that always erupted in a King demonstration; 3) his plagiarism; 4) his sexual pathology; 5) his pagan beliefs.

Martin Luther King attended a Communist training school in Tennessee. A famous picture shows him enjoying a lecture in the company of Communist Aubrey Williams and Abner W. Berry, a member of the Central Committee of the Communist Party. Rosa Parks, who helped King launch the Montgomery Bus Boycott, learned how to do it at the same Communist training school.
...Suddenly, King started to make speeches about the war in Vietnam. Well-meaning Americans scratched their heads. The war took him far afield from "civil rights," and his speeches started sounding like enemy propaganda cooked up in Hanoi. The reason was that Stanley Levison was writing those speeches. So who was Stanley Levison?

Comments for "MLK Holiday Proves US Always Was Closet (((Communist))) "

During King's time of stirring up dissension and revolution in mostly the southern U.S. states (which eventually led to blacks becoming a privileged class in the U.S.), he organized a march on a western Maryland city, Hagerstown, if my memory still serves. His opportunistic marchers halted a few miles south of town awaiting King's limousine's arrival.

Meanwhile a group of Hagerstown citizens, mostly black and led by a black doctor who had been delivering the babies of Hagerstown for many decades, hundreds of them white babies, arrived from the north and blocked King's unruly bunch from moving forward. The doctor told King and his wrecking crew that they would not be allowed to destroy the peace of their town.

King, tail between his legs, got back into his chauffeured limousine which turned around and left.

End of story. But a story of no interest to the kept media.

Bobby and John Kennedy maybe had the right idea on Civil Rights.
They were not White Apologists but were supporters of Civil Rights. Bobby and John were both nationalists who represented ALL races of America.
I don't know if MLK really believed that his "dream" could only be achieved with the help of the Communist Party or not but he was being partially supported by them. Along with their support came the price tag of an anti American agenda.
John Kennedy actually approached MLK about his Communist associations in the Rose Garden. He knew that Communism would eventually bring chaos and division to America.
Born Michael J King Jr., his name was changed to Martin Luther King Jr. when he was 28 years old. Odly, King was never a Lutheran at all. Michael was a Baptist minister. However, he had a lot of success with this new name. It gave him dignity and reverence.

Yep, a lot of us know all that and more. The one thing I find ironic in the whole King shitpile is the fact that the government murdered him and then gave him a national holiday. What does that say about the US government? That's right I was thinking the same thing.
--

Apparently, his opposition to Vietnam was off script.