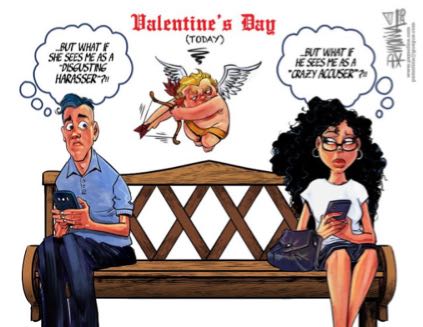 Sober Second Thoughts for Valentine's Day
The wellspring of love is woman who generates love by sacrificing for husband and children and is cherished in return.  The Cabalists have poisoned this well by teaching women to be selfish and to seek power and sex instead of love.
from Feb 14, 2018
by Henry Makow PhD
1. The claim that Western society is de facto Communist seems far-fetched. Yet, if we consider that a major goal of Communism is the destruction of marriage and family, the claim makes sense.

Communist social engineers are responsible for creating a toxic environment for marriage: Promotion of gender confusion and homosexuality; the war on gender itself (feminist usurpation of masculine role); the mainstreaming of promiscuity ("sexual liberation" pornography); and the promotion of transgender rights, as if 99.9%  have no rights.
The campaign to erase marriage from our consciousness is borne out by statistics.  For example, last year, only 9% of 18-to-24 year olds in the U.S. were married, compared to 45% in 1960. The US birthrate has fallen from 2.5 per woman in 1970 to 1.9 in 2016.
2. Communism is Cabalism which is a Jewish satanic cult which includes Freemasonry. It denies the existence of God and the soul. It destroys love because God is Love.
The wellspring of love is woman who generates love by sacrificing for husband and children and is cherished in return.  The Cabalists have poisoned this well by teaching women to be selfish and to seek power and sex instead of love. 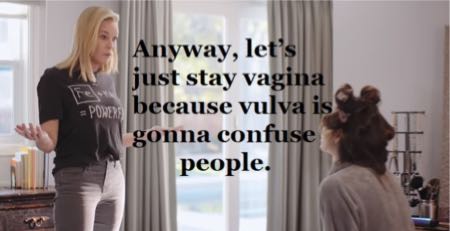 (Complete with typo. In a more civilized day, women didn't talk about their cunts.)
Woman's attraction for men is based on her beauty, innocence and modesty.
The modern woman is now a "proud slut" that few men want.
For example, actress Jessica Biel "has produced a series of quirky videos tackling tricky sexual health issues. In one, ( above left) the actress jokes about her genitals with Chelsea Handler after the comedienne walks in on her inspecting her genitals."  ("Jessica Biel teaching tot sex ed, "Winnipeg Sun, Feb 9, p 55.)  Where before a man had to court a woman and earn her trust, now she flaunts her wares like a streetwalker.
Another example of how messed up young women are: A female gymnast abused by the team doctor thinks appearing nude in Sports Illustrated is "empowering" and somehow restores her virtue.
3.  The norms of hardcore porn have been mainstreamed. The most obscene sexual behavior is discussed in public. This has created chaos for men and women looking for marriage and love. They must wade through tidal waves of people who just want sex.
4.  "We" are prisoners in the bodies of apes. Procreation is the most powerful instinct for these apes.  The male ape is sexually attracted to almost every comely fertile female ape. His interest lies in inseminating this female and usually ends there. Don't blame the ape- that's the way nature made him.  Forcing marriage on these apes was a way of making them treat the woman as a human being not just a sex object. It was a way of providing a healthy environment for children. But now, women have largely accepted this denigration. Otherwise, they would insist on courtship and marriage for sex.
5. By succumbing to our natural instincts, we are prisoners of our ape-selves. What passes for "love" is usually sexual attraction. The novelty wears off and you're left with the person.  Build marriage on a more substantial foundation: Mutual Dependence.  List your needs and your potential mate's needs. Mutual dependence, along with common goals, respect, trust, affection, are a more realistic basis for a long-term union than infatuation.
6.  As far a sex appeal goes, women have a fast depreciating asset that they want to exchange for long-term emotional and financial security. Far from "empowering" them, women have been tricked into surrendering their power (by giving away sex.) 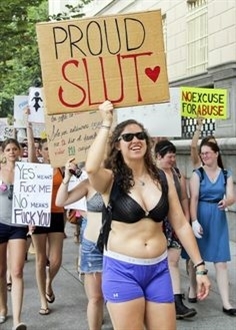 WE LIVE VICARIOUSLY IN AN ILLUSION- THIS IS CABALISM
7. We get most of our ideas about life from Hollywood but reality is nothing like the movies. Screenwriter Ben Hect described his work as "telling lies about life." For example, romantic love is an illusion, a sublimation of a religious need. We are in love with God (perfection) but idealize sex instead. The Illuminati (satanist) media made young women into false idols. In a sense, we're going to the opposite extreme. Women now have been thoroughly demystified and many have become the object of contempt.
In general,  Hollywood has also created the illusion that people are more interesting than we really are. We'd all be more interesting if someone were writing our lines. I think most people put on a good front but we're all pretty scared.
Are we worthy of love? Are we even lovable? Love us out of compassion: We all have to navigate through this deceitful, bizarre world, struggle to support ourselves and our families, and then witness our own decline and death.
8. Under the Christian dispensation, society was at least nominally dedicated to taming the beast and aspiring to spiritual ideals like Truth, Goodness, Love, Beauty, and Justice. Now under the Communist (Satanist) dispensation, culture is devoted to releasing the beast and negating these ideals. Our toxic cult-ure is defined by the Illuminati. Our attitude to homosexuality has gone from a visceral disgust to schools prompting children to experiment with it. Our cities are "cold and forlorn" to use the approving words of the Protocols of Zion.
Reality is Morality, not the school for scoundrels that our cult-ure defines us as.
We desperately need to replenish the well with fresh, clean water. We need to reassert genuine Christian values: the idea that we are all one Divine soul, looking out through many eyes, one family bound by God's Love and benevolent Purpose.
-----------

Comments for "Valentine's Day: Cabalists Poisoned the Well of Love"

My father always told me that men want sex and women want security. Scriptural support for this idea can be found at Hosea 2:7, where backsliding Israel returns to her husband and says: "I'll go back to my [first] husband [Jehovah]. That's where I was at first. I was better off then than I am now" (Hosea 2:7).

Marriage and family can be saved if we realize the value of both.

We must realize that social engineering is happening. Most don't have any idea. Then we can focus on what is really important in our lives.

We must realize there likely is a God and that we do in fact have a soul.

True deep passionate love in no way involves sexual attraction or sex itself.

Our ideas about life should be intrinsic and introspective, and not based on outside factors such as Hollywood.

True love does come from compassion.

"We should start to adopt spiritual ideals like Truth, Goodness, Love, Beauty, and Justice"

These values we as a society need do not necessarily have to be based on the Christian faith. There are other souces we can seek to get these values

The "well of love" can only exist when man still has a measure of innocence left in him.

We continue to confuse love with lust. It's our own selfish desire to put the label of love on what is a really physical lust to excuse ourselves.

There are also those who marry for money and tell themselves that they will eventually "learn to the love" their partner in due time.

Love is not selfishness, love is unselfishness. It's not a fairy tale that exists only in our imagination.
Once man's innocence is gone he has been had.

Concerning your latest article â€˜Cabalists Poisoned the Well of Loveâ€™ I would like to say, that every shadow is been cast by a light. By which I mean that one can keep on moaning and crying about lost common values, but there is also a brighter side to be seen. For me the brighter side of the planned destruction of all social structures, especially the family structure, is the opportunity for people to become more individualized through their quest for finding a new social bonding. By the possibility to find on an individual level a conscious connection to the creative source within, people are able to express their own creative power in a more nonattached way.

Blood bonds are not free. They are tying one to the generational family ties, which are based on karma. By expanding ones consciousness past the smaller family unit and learning to connect with likeminded fellow humans in a liberating way, we all can learn to embrace the whole of humanity as our family. In my opinion we are now living in a transitional time in which we may learn to develop a totally new communal paradigm. Rahm Emanuel ones said: "Let a good crisis never go to waste". He meant this according the Illuminati way of creating order out chaos. But we all have the capabilities to create a new god inspired order out of the chaos that the Satanists inflicted upon humanity. It was their task to that. Now it is our task to put the pieces together again in a new way and mend the mirror of broken dreams. All in all this transitional time can empower us on a very deep level. So letâ€™s go for it!

"Male apes are sexually attracted to almost every comely fertile female ape. Their interest lies in fertilizing this female and usually goes no further. Don't blame the ape- that's the way nature made him."

This is true but the difference between Man and apes is that Man has a soul and reason whereas apes have no soul and run on instinct alone. Therefore apes or animals can never sin because they are always doing the will of God. Man can use reason to deny his passions which is what brings him closer to God.