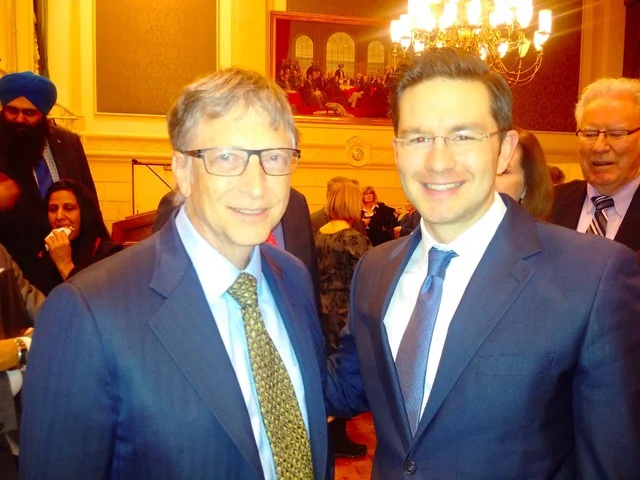 (Canada's future Prime Minister Pierre Poilievre with Mass Murderer Bill Gates in 2016. Poilievre promises to make Canadians "the freest people in the world.")
The Hegelian Dialectic
Thesis -   Fake pandemic. Deadly gene therapy causing millions of deaths and injuries. Destruction of  democracy and human rights.
Antithesis --  Confidence in government and all social institutions is totally destroyed. Led by courageous truckers, people revolt. Chaos. Supply chain issues. Violence.
Synthesis  -  Globalists restore social order.  A handful of covid patsies are punished. Relieved, humanity accepts world government.
I'm not saying the trucker movement is false opposition.  I've never been so proud of my fellow Canadians and urge everyone to get behind the truckers. Certainly the rank and file are sincere. Nevertheless, we should be aware that the trucker uprising may be part of an Hegelian dialectic. Frankly I don't care. False opposition is better than none at all.
by Henry Makow PhD
1. On Nov. 7 I posted this--- The "Plan" -- Overthrow All National Governments

A billionaire in NZ supposedly leaked this info to a service provider he befriended. It was posted on Reddit Conspíracy.

"The tables turn on the vaccine narrative. I was told in time the vaccine will increase infection and increase death. That billions will die, and the people will be enraged and burn their governments to the ground. Their leaders, scientists and media will be torched, hunted and hung in the streets. BOTH sides will burn their governments to the ground. The pro-vax side, completely betrayed and dying will rage.. the non-vax side will rage for what their gov allowed to happen."
It's starting.

Illuminati throwing Fidelito Under the Bus

Look at the home page of The Daily Mail today
https://www.dailymail.co.uk/news/article-10491879/Moment-elderly-man-cuffed-arrested-two-Canadian-cops-HONKING-judge-outlawed-it.html 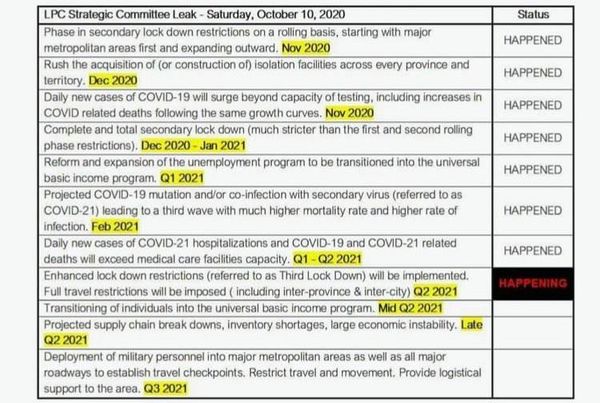 While they're running behind schedule, the last two items are "Projected supply chain breakdowns, inventory shortages, large economic instability."
Truckers blocking Windsor-Detroit Bridge Could Bring Auto Industry to Its Knees
(Tuesday, this blockade was lifted but it could return.)
and
"Deployment of military personnel into major metropolitan areas...travel checkpoints. Restrict travel and movement."
They would need an excuse to do this, and the truckers provide one.
3.  On Monday, I posted this item by an US Attorney Beth Anne Wright - Ottawa Police are Guilty of War Crimes
https://www.henrymakow.com/2022/02/ottawa-police-are-guilty-of-wa.html?_ga=2.170837792.1006389435.1638658226-346964864.1627224119

The Protected Persons are advised to remain peaceful; record the names and images of anyone potentially committing War Crimes; and request assistance from "Protecting Powers," namely, the Global Military Alliance. See id. Beth Ann Wright, JD, OTR/L Can you get this message out?
WTF is the "Global Military Alliance"?   Is she talking about the UN?  It would be ironic if the covid perps took power by rescuing us from their own bullshit. 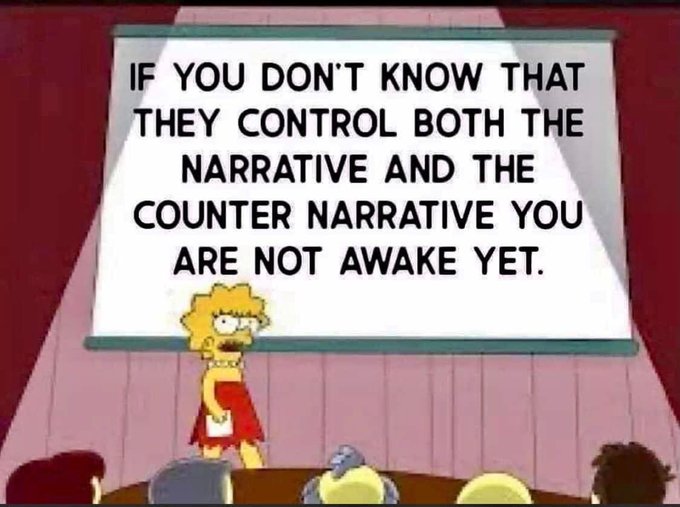 4. After almost two years, Tucker Carlson, Jordan Peterson and Elon Musk have come out against the covid bullshit. They have not been banned from Twitter or YouTube. Carlson wears a Cabala wrist band.  I want to believe these guys are sincere because they are right and command a huge audience.
Jordan Peterson takes Fidelito Behind the Woodshed

One million views.
5.  Trucker Fr33dom Convoy - come on, it's a Psy-Op!
Swedish blogger Joachim Bartoll points to some some disturbing Illuminati images on logos. But these logos are not in wide use. He also analyzes numerology which I have no time for.
At a first glance, it might look as a good thing. Yeah, they're doing a strike against vaccine mandates and other fascist government crap. Sure, but never forget that they always control both sides. That is called Controlled Opposition. No movement will be allowed unless they control it. It is that simple.
6. Several prominent anti-vaxxers, incl. RFK Jr. and Dr. Carrie Madej, were connected to a Masonic group, The Academy of Divine Knowledge. These ties have since been covered up.
CONCLUSION
Stopping satanist psychopaths from enslaving and exterminating humanity is never false opposition. They must be stopped at all costs.
We just need to ensure that the alternative is not globalism wearing a different mask.
All resistance to Communism is linked to Zionism. (Why they never define COVID in terms of the Masonic Jewish Conspiracy to dispossess, depopulate and enslave humanity. Covid is just the latest in this ancient vendetta against God and man.)
And Zionism is linked to Communism. It's a Masonic Jewish tag team.
----------
CR weights in-
Addressing accusations against the Freedom Convoy

There are allegations floating around online of how the Freedom Convoy protests that started in Canada are in fact a satanic or Illuminati psy-op.
While it is likely that there are bad actors seeking to exploit the movement for their own gain, there is no reason to think that the organizers themselves or the vast majority of protesters and supporters have any bad intentions.

The two main organizers of Canada Unity ( https://canada-unity.com/bearhug/ ) (the official name of the organization running the protests) are Tamara Lich, a woman from a Metis background who was formerly a board member of the Maverick Party, and Benjamin Dichter, a Jewish man who co-founded LGBTory, an organization for Conservative homosexuals.

Dichter has also spoken at Zionist events and has voiced concerns about the influence of political Islam in Canada.

While some may not care for some of their political views or their personal lives, these are the perfect people to have as the face of the movement when you consider the initial outcry from the media and government of this being a white supremacist rally.

An article ( https://bartoll.se/2022/01/staged-fr33dom-convoy-psy-op/ ) posted on a Swedish blog purportedly exposes a hidden 666 in the Freedom Convoy logo.

However, this is not the official logo of Canada Unity.  In fact, I haven't been able to find this logo on any site or social media account related to the convoy at all.

I live in Ottawa and have been to the protest several times and have never seen the 666 logo.  It is quite likely that this logo was created by someone hoping to smear this as a satanic movement.

There could be something to the gematria numbers, but Freedom Convoy isn't actually the official name of the movement (Canada Unity's site says "Convoy for Freedom 2022") and is just what people started calling it online.  Not really a clear connection, but it does make you wonder how and why it became known as Freedom Convoy. 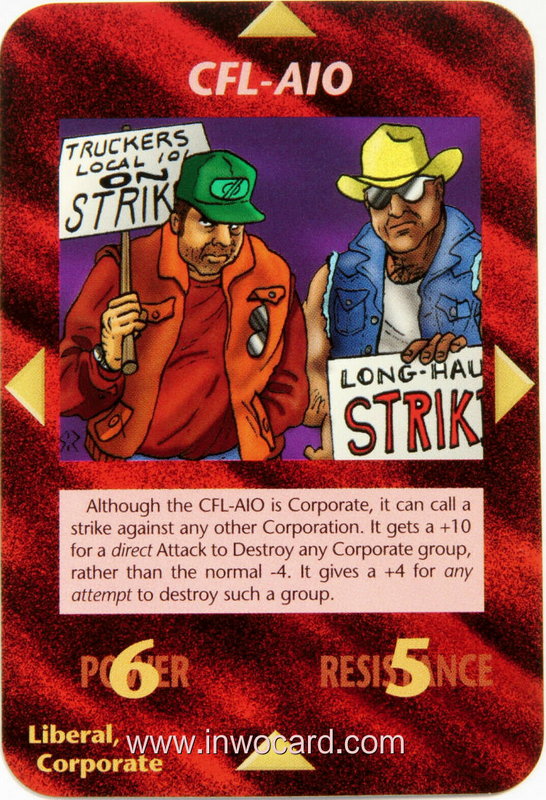 It turns out that The Line Canada's logo (line through circle) matches a logo found on a hat in the 1994 Illuminati card game, in a scene from a truckers' strike.  A rather odd coincidence at the very least.


The Line's leader is Lamont Daigle, who was criminally charged in relation to previous anti-lockdown protests and is the person who made social media posts calling for trucks to be driven into the Parliament buildings.

Daigle was also embroiled in a dispute with Ontario MPP Randy Hillier with both calling the other controlled opposition.  I have to say I would take Hilliers side in this argument.

The Line is not involved in organizing these protests and I doubt you could find a dozen of their logos at the Ottawa protest, but the organization was questionable to begin.

Considering Daigle's irrational behavior and the connection to the Illuminati card game, it's safe to say it would be best to steer clear of them.

Is it possible that The Line was created specifically for the purpose of taking part in these protests?


Regardless of the actions of a few unaffiliated weirdos, potential connections to gematria and  Illuminati symbolism, this movement is the latest development in a fight against the biggest infringements on human rights in the modern era.

If you don't support the aims of the Freedom Convoy then you stand with traitors to humanity like Justin Trudeau, Klaus Schwab, and Xi Jinping.

How you can Tell the Freedom Convoy in Canada is Real?

“and if the government of Canada starts firing on truckers—and they may—this will get even worse for
the governors. This has the ability to blow up into a full-blown revolution, with heads actually rolling.
Once the military switches sides, anything is possible, including hangings or firing squads… “

They are not so much false opposition as they are a purposely provoked event. This event was needed by TPTB for something. The vax mandate for truckers was an obvious provocation in order to justify this event.

The outrage with the mandates is organic, but the idea and organization of the caravan was most definitely pre-planned. These truckers are ultimately patsies, very similar to Jan. 6th protestors in DC.