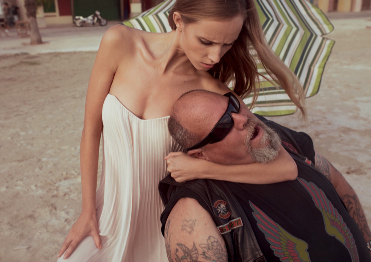 (left, Billboard for "French Connection" outside Eaton Center Toronto, with caption, "Who is Woman?")

"There is no question that the Illuminati is bent on spreading dysfunction. Our political, business and cultural leaders are either fools or traitors, or both."

I spent last week in Toronto, where signs of the elite's psychological attack on heterosexuals are everywhere. Young females are the main victims. (I will expand below.)

For example, on Saturday, the largest newspaper, The Toronto Star, featured a front-page story on a "progressive" couple which is raising their third child, "Storm" to be genderless. They are not telling the child or anyone else what sex s/he is.

Inside there are two full pages where this Marxist couple explains, "If you really want to get to know someone, you don't ask what's between their legs."

"We've decided not to share Storm's sex for now -- a tribute to freedom of choice in place of limitation, a standup for what the world could become in Storm's lifetime (a more progressive place.)"

Setting aside the absurd presumption that gender implies some limitation, why are these Marxist crackpots getting this kind of coverage? Why are they being set up as a model by the Illuminati-controlled media?

Look at the "parent central" logo where this article appears online.     Dot in a circle, the familiar Illuminati motif.

In a sane world, child protective services would remove the child from these lunatics.

Masculinity and femininity are essential components of our identity. They are biologically determined not socially-conditioned. Males have ten times more testosterone than females.

There is no question that the Illuminati is bent on spreading dysfunction. Our political, business and cultural leaders are either fools or traitors, or both.

"BECAUSE I AM A GIRL"

On Toronto streets, young males are soliciting donations for Plan Canada's campaign to empower third world girls. This campaign is designed to make girls see their interests as distinct from their families. It's part of the perverse satanist agenda of rendering marriage and family obsolete.

Look at the logo for Plan Canada. Yup. Another stylized dot on a circle.

In the subway, Plan Canada has billboards which claim all girls in the third world are being exploited. One claims everyone else eats but girls go to bed hungry.

Another billboards pretends that supporting these girls is a human rights issue.

Human rights law in Canada is centered on the issue of discrimination. This campaign discriminates against boys who apparently are unworthy of support.

Can you imagine allowing such a campaign focused strictly on boys? It proves that "human rights" is just a higher form of discrimination. Illuminati-favored groups have them. Groups that the Illuminati perceive as a threat, don't. 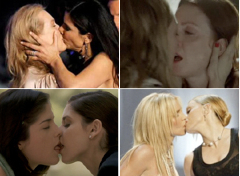 Meanwhile, Metronews devoted an issue May 17 to Lady Gaga and her message that people should define themselves solely by their sexual orientation and that bisexual or homosexual is where it's at. This is disguised as advancing "homosexual rights."

This international freebee paper espouses the familiar Illuminati agenda: subvert gender, racial, national and family identity. Gaga fans from around the world were asked what they think, and uniformly the answer was: people have no identity of any kind, except possibly for gay.

"The key to creating a world where we are all valued, supported and nurtured.. is to recognize we are all the same," said one. They all echoed the Gaga mantra "I was born this way" which refers to homosexuality.

Meanwhile, back in Winnipeg, more than 350 young feminists held a national conference at the University of Winnipeg.

Don't you think it remarkable that these young women have money for this? And get coverage and support from established media and universities?

"The Reb ELLEs Movement describes itself as a national network of feminist collectives and young feminists working to defend women's rights and to co-ordinate actions to fight sexism, patriarchy, colonialism and capitalism," reported the Winnipeg Free Press.


What does anti-colonialism and anti-capitalism have to do with feminism? Clearly feminism is a Communist front.

If a woman will not accept her husband's just leadership, she does not love him.

Femininity is based on loving and nurturing husband and children.  A woman loves by surrendering power to her husband in exchange for his power (protection) expressed as love. Men want power; women want love. Heterosexual marriage is based on this exchange.

It just makes sense that a woman needs a man's support while she raises children. Thus, marriage is essential to both a woman's fulfillment and material security.

Masculinity is defined by power. Power = penis. Empower women and you give them a psychological penis. You neuter them.

By sabotaging their gender identity and their faith in marriage, the Illuminati are transforming females into their sexless worker-drones and amateur whores.

The signs last week weren't only on walls or in newspapers. Most of the young women I saw on the street clearly defined their self-worth in terms of sex appeal. 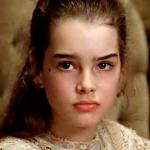 But they seemed to regard male attention as predatory. They were like amateur streetwalkers who were both too self-enamored and gender-confused to relate to males.

Yet they will actually demonstrate for the right to behave like sluts without suffering any consequences. Their younger sisters are also being sexualized and look like Brooke Shields in the film Pretty Baby. (left)

The Illuminati are turning young women into mutants, unfit for marriage, and unfit for motherhood.

They are fit only to betray themselves and their society as cannon fodder in the New World Order.

Our world is increasingly zany because it is controlled by
a Cabalist satanic cult, the Illuminati.

Yet another sexual orientation - asexuality
http://www.asexuality.org/home/

suggest researching the origins of the article, i.e. editor, writer, president of the newspaper, the parents. File a lawsuit "harmful intent", and use the Lawful Defence presenting this case before
community members (jury). CPS is never a solution and has shown to cause even more harm.

Those with financial means, because filing in Court costs , to begin to fight for God-given rights.

The outcome might be repentant people, forced to turn from erroneous ways, admitting deception.
The community, by not taking action, is complicit in these crimes, since exposing is not sufficient.

A direct approach initially to avoid Court is unlikely to yield results under the current circumstance.

If you want to fight the NWO, this will have to be in the power-base
which are their fraudulent courts,
and expose their fraud, case by case, one at a time. If enough people do this the system will break.

The Illuminati have taken over the Courts belonging to the people. I fight to take these Courts back.

"In a sane world, child protective services would remove the child from these lunatics."

Not quite, Mr. Makow. Please be careful with such statements and don't let your anger get the best of you. You see, in a sane world there would be no place for child-grabbing institutions such as the CPS. If someone is being mistreated, it's the job of the Police to intervene, regardless of the age of the victim. Isn't it obvious that the CPS is just another merciless, bureaucratic machine set up by the Illuminati to destroy the family? Besides, if we want true freedom, we must accept parents' right to raise their offspring as they wish. Even if we find it repulsive, as you and I and any other normal human being do in this case.
---

I have noticed the inordinately high numbers of feminized men. These men literally ' act gay '.

Had a conversation at work with a client. I could have sworn he was gay. Then one day on the job-site he starts making comments about his wife. I was stunned. I thought, " What do you mean ....your wife...you don't have a wife: You're gay !! " I said to myself.

I looked down towards his left hand, and sure enough - a wedding band.

I was very confused - perhaps more so that he/she was ! There was no difference between this heterosexual man's behaviour and mannerisms ( lisp included ) and that of a queer. None

These insane attacks on gender are working like a charm - especially in urban areas.

What the Illuminati seek is the world as a place of disorientation. When Marxists speak of "permanent revolution" what they're after is also a sense of general disorientation in the masses.

What may be politically correct today may be anything but tomorrow. Eventually, the masses lose their self-confidence, dare not make independent judgments, and defer to authorities to set the standards for what's natural and normal. Which, as often as not, is in fact unnatural and abnormal.

In Sweden, a fraction of the hyper docile and conformist male population will sit, for example, in order to urinate, as a gesture of "solidarity" with their "sisters." It's their docility and conformity, the Illuminati value, not their absurd and futile display of gender "solidarity"...

Hi Henry, just wanted to say that after 30 years of raising& breeding dogs, yes, gender differences exist, and yes, they are inherent and unchangeable.

I thought you may be interested in commenting about Beyonce's new video "Run The World (Girls)"... it's packed full of symbology.

Henry the world i live in as a 24 year old male is a sick place and everyone is suffering. And the increase in single mothers, divorces. crime, and homosexuality and if that isnt bad enough you have the economy suffering in many areas.

The worse thing in the world I live in today is gender role confusion which can be seen on a daily basis. I have read your book the "Cruel Hoax" and have applied your book into my relationship with my girlfriend and things have worked very smoothly the rifts we have had are very minor and are only there because of the society and indoctrination that they teach women in schools.

She has come around slowly but surely because she is a Christian girl and it is natural for her. She cooks breakfast, dinner, and lunch for me more times that i can count and i don't even live there and she has also stared wearing more dresses :D and on the flip side i have turned more into a man and stared doing more traditional roles such as doing handy work fixing things, moving furniture and taking out her trash.

If i didn't read your book i would have been doomed for failure as i think most people are. The problems i listed above are spreading like wildfire and things will get worse. I think your bestiality prediction will come true someday.

You make mention about how "Women are becoming obsolete"..

I agree, but would take it one step further: my sense is that the goal the Illuminati are driving towards is not simply to make women "obsolete", but rather the complete and total extermination of the entire female gender (at least in the lower social castes). The goal is to create a "worker caste" of genetic clones, all male, albeit heavily, heavily emasculated. Insofar as the Illuminati are concerned, men are better "workers" than women: more logically focused and oriented, and certainly less given to emotional upset. The clones will be "engineered" to not need sports or entertainment or other such "distractions" as presently occupy the minds of men, and will be trained to release what latent sexual energy they have in a homosexual manner.

Women will, no doubt, persist and remain, but only in the high social castes, not the worker castes which would comprise ~98% or so of the population.