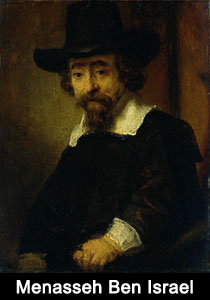 
Even Jews have a self-image of a poor, beleaguered people. In fact, there has always been a powerful class of Jews who allied with aristocrats, and served as advisers, bankers, administrators, tax collectors, enforcers, doctors and tutors, becoming an elite caste of their own. They used their positions and worldwide contacts to dominate trade and become extremely rich. They rewarded their protectors handsomely.

Their role in the "Enlightenment" and Western imperialism has been discreetly veiled.  The neo-feudal New World Order continues this cozy alliance with the Gentile elite. The concept of a "Chosen People" is ideally suited for a Luciferian plutocracy dedicated to colonizing the human race.

"APOLOGY FOR THE JEWS'

A famous letter, "Apology for the Jews" (1650) provides an unfiltered picture of Jewish power and influence 350 years ago. The letter was written by Rabbi "Menasseh Ben Israel" (Manoel Dias Soeiro, 1604-1657) a leader of the Amsterdam Jewish Community to convince Oliver Cromwell,(1599-1658)  to allow Jews back into England.

Ben Israel's arguments for Jewish return probably were a formality since Cromwell was probably financed by the Amsterdam Jewish bankers. Nonetheless, he reveals much about the attitude and  "condition" of the Jews at this time.

Jews have always used their "religion" as a method of gaining special privileges, including military exemption and their own judiciary. Ben Israel tells Cromwell that God blesses those who aid the Jews and curses those who don't. The Bible decrees that the Messiah won't return until "the People of God" have been fully dispersed to every corner of the world, England included. Then Jews can return to Israel and never soil their hands in trade.

The letter makes clear that elite Jews got world power the old fashioned way- they bought it. He says they are extremely loyal to Princes and Nobles and reward them generously. He mentions numerous Princes that welcomed Jews and says it is easy to judge from the trade they generated, "the profit that Princes and Commonwealths do reap, by giving liberty of religion to the Jews, and gathering them by some special privileges into their countries: as Trees that bring forth such excellent fruits."

The accumulation of wealth indicates "the favor of Providence," the Rebbe says, defining his religion.

"Profit is a most powerful motive, and which the world prefers before all other things..."  Trade and commerce is the proper profession of the Jews, by virtue of their dispersion, and because God has given them a "natural instinct"  that allows them to "thrive in riches and possessions" making them useful to their Princes. There arises "an infallible profit, commodity and gain to all those Princes in whose lands they dwell...."

The Jews have no equal when it comes to "merchandising" and "contriving new inventions." Wherever they go, trade flourishes. For example a Jew invented the "Spalatro Scale" which brought the trade of the Levant to the City of Venice. [According to the Jewish Encyclopedia, the Spalato Jews were highly favored by the Venetian republic, local trade and finance being almost entirely in their hands. Among the noted Jewish families were those of Pardo and Macchiero.]

THE  SEED OF GLOBALISM

After being expelled from Spain in 1492, Jews dispersed to Holland and Italy. They aready lived in such disparate places as Egypt, Turkey, and India.  There are three synagogues in Cochin, India where the Jews have tawny colored skin. Jews enjoy freedom and prosperity in Baghdad and Persia. In Constantinople, capital of the Ottoman Empire, "there is no Viceroy, or Governor or Bassa who hath not a Jew to manage his affairs and to take care of his estate." Soon they "grow up to be Lords of great revenues: and "most frequently" influence "weighty affairs in government."

The Bassa of Egypt has taken a Jew to be his Treasurer and by virtue of his influence in dispensing favors, he "grows very rich."  Many millions of Jews live in the Ottomon Empire and in many cases "they are preferred before the natural Turks themselves."

In Prague, Vienna and Frankfurt there is a "great multitude of Jews" favored by the Emperors but "despised by the people." A far greater number of Jews are found in Poland, Prussia and Lithuania, Although the Cossacks have lately killed 180,000, there is still an "infinite number." All trade is in the hands of the Jews, "the rest of the Christians are either all Noble-men, or Rustiques and kept as slaves."

He says Jews are protected by all the Princes of Italy. They make their HQ in Venice where they possess "about 1400 Houses." [Trading companies?] They are received with "great Charity and benevolence" in Amsterdam where they draw a huge trade.  They have "no less than 300 houses of their  own, [and] enjoy a good part of the West and East-Indian Companies."  In Hamburg, there lives a hundred families, protected by the magistrate though molested by the people."  Jews enrich the native populations and there are many Gentiles that build themselves houses and palaces.

Although there was no official proclamation, Jews were tacitly allowed to return to England. The "British" Empire became a vehicle for the longstanding alliance of Cabalist Jew and Gentile aristocrat to achieve world domination. Now, American imperialism carries the baton, to be replaced eventually by a world government mechanism.

History needs to be rewritten in terms of the actual conflict that took place between the secret hand of the Judeo Masonic alliance against indigenous forces of Christianity, nationality, race and family. Culture today is Cabalist in character: pseudo mystical, solipsistic, and amoral. It rejects God, and deifies man and sex instead.

A distinction must be made between the rich Masonic Jews and Gentiles and the ordinary Jews and Gentiles that are their dupes and go'fers. Ordinary Jews have suffered as much as ordinary Gentiles from the megalomaniac vision of the Masonic elite. Masonic Jews guaranteed Jewish solidarity by ensuring that all Jews suffered for their sins. "Anti-Semites" were only too happy to oblige.

This is really about the concentration of wealth and power in the hands of a tiny Lucifer-loving cult, and the serfdom of the majority of mankind, regardless of race.
----
Related:

Comments for "Some Jews Have Always Exercised Great Power"

Henry, I was recently in Venice, and toured the Jewish ghetto.

The Jew guides were quite frank in describing the only way Jews could ply their financial (principally money lending) trade, and integrate into 16th c. city life was whenever the Venetians found themselves at war and needing funds for battle. Amazing admission, although they did not acknowledge to that Hegelian tactics might have been used by the Jews to stir up conflicts.

Iâ€™d love to read more on this history, if you know of any.

I am ever more thunderstruck by the truth and clarity of your stories, but even more that so few are willing to consider it.

I need to read your book. I think I need to tell the local bookstore I often by Christian books at to buy a few copies of yours. The local christians compromise a great deal and many churches are being vaccumed into and being run by the jerk secret societies and teach we all must love and anyone that doesnt accept other groups as christians needs to leave church and follow the world. Satan really does run the churches like only a handful agree on like www.jesusfamilies.org and www.jamesrussellpublishing.com to name a few.

I been threatend to leave church and not use bold christian car stickers to speak against drugs and alcohol. Its okay with the local christians to kiss up to local and federal government though while they tell individuals they cant follow or trust Christ without commitment to a local ungodly church that uses buses and odd speakers from various religions as they think they speak for God.

America is a bad place now to live and I hear the same about Canada. Please pray God will use me even though many dont accept me as a christian because I dont support Masons or pastors that control people through secular wisdom and churchism.