Climate Hoaxes -- Either Too Hot or Too Cold 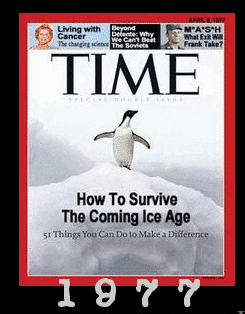 "The real enemy is humanity itself."
Humanity is whose real enemy?
The Illuminati. The people who
control our money, politicians, media,
churches, and education. Why would we trust
Satanists who murdered 3000 Americans on 9-11?
Latest- Globalists using climate change hoax to promote depopulation agenda. Demand billions are culled.
------- 45 Quotes that imply the Illuminati want you dead
by Andrew
(henrymakow.com)
In 1975, the mass media panicked Americans with a phantom Ice Age.
Our government pushed "the coming ice age."
Random House dutifully printed "THE WEATHER CONSPIRACY ... coming of the New Ice Age." This may be the only book ever written by 18 authors. All 18 lived just a short sled ride from Washington, D.C. Newsweek fell in line and did a cover issue warning us of global cooling on April 28, 1975. (See below)
And The New York Times, Aug. 14, 1976, reported: "many signs that Earth may be headed for another ice age." https://www.newsweek.com/newsweek-rewind-debunking-global-cooling-252326
The Global Cooling Scare fizzled, so in 1991, mass media initiated a new fear campaign called Global Warming which later became Climate Change.
American propaganda needed a new enemy. The media couldn't use the Red Scare anymore because, in 1990, the USSR collapsed into 15 harmless post-Soviet states, Armenia, Azerbaijan, Belarus, Estonia, Georgia, Kazakhstan, Kyrgyzstan, Latvia, Lithuania, Moldova, Russia, Tajikistan, Turkmenistan, Ukraine, Uzbekistan. 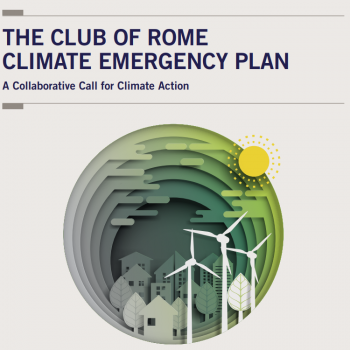 To fill the POLITICAL ENEMY VACUUM, The Club of Rome announced in 1991, Chapter 5 of THE FIRST GLOBAL REVOLUTION that our new enemy was GLOBAL WARMING.
"In searching for a new enemy to unite us, we came up with the idea of pollution, the threat of global warming: water shortages, famine and the like would fit the bill. All these dangers are caused by human intervention and its only through changed attitudes and behavior that they can be overcome...The real enemy then is humanity itself."
This Global Warming propaganda began with Al Gore's 2006 documentary, An Inconvenient Truth, claiming that CO2 caused GLOBAL WARMING. Gore claimed the scientific community unanimously supported his message; however, real scientists joined together to produce a rebuttal documentary in 2007, The Great Global Warming Swindle. https://www.youtube.com/watch?v=H3IhIUBghPc&list=PL84BADA23B1E572B0 They explained that yes the Earth has been warming since last Ice Age 20,000 years ago (except for a brief Interglacial Period 11,000 years ago).
Even 8000 years ago, what today is the Arabian and Sahara Deserts were lush grasslands with abundant rainfall, rivers and lakes. The serious Earth warming began 5000 years ago caused by shifts in Earth's axis and greater solar radiation. The Industrial Revolution and burning of coal and petroleum fuels began in the 17th Century when instead of warming, Earth experienced a Little Ice Age between 1645-1715.
What Al Gore, Greta Thunberg and the rest of the alarmist fail to explain is how CO2 representing less than 1/2 of 1% of Earth's atmosphere supposedly causes GLOBAL WARMING. CO2 is a HEAVY terrestrial gas; its molecular weight is 44 which is so heavy (relative to Nitrogen and Oxygen, 99% of Earth atmosphere) CO2 remains close to the ground providing fuel for vegetation's photosynthesis. Plants need CO2 the way animals need OXYGEN.
So is everything OK?
NOT EXACTLY!
Solar activity in the form of our sun's flares and sunspots surprised scientists with a premature SOLAR MINIMUM 2 years ago.
But don't panic because we're only in for a chillier than normal winter.
http://endoftheamericandream.com/archives/record-low-temps-of-up-to-45-below-zero-threaten-to-absolutely-wreck-the-rest-of-the-harvest-season
Related - Climate Change's Hidden Agenda - Communism
------------------ Climate Change Hoax Dates Back 80 Years
------------------ The Illuminati Conserve the Planet for their Personal Use - Use Saving Animals as an Excuse
----------------------
April 28, 1975 Newsweek 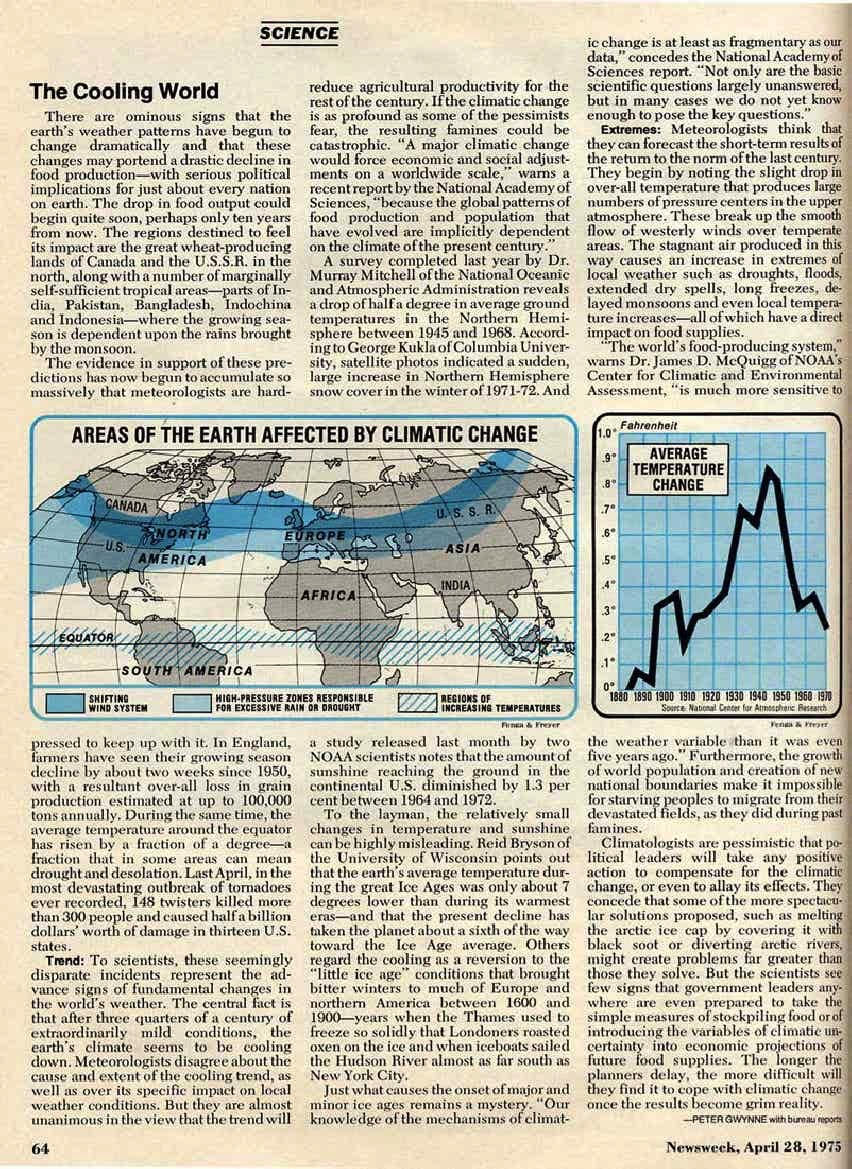 Comments for "Climate Hoaxes -- Either Too Hot or Too Cold "

The climate has been hijacked by the Ruling Elite with their geoengineering of the weather and atmosphere. They use the chemtrails that they have been spraying for the past many years to geoengineer the weather. "The chemtrails contain toxic heavy metals and chemicals which are then guided/manipulated with extremely powerful radio frequency signals. These signals are transmitted from countless locations around
the globe from various types of transmission platforms (ionosphere heater installations like HAARP, SBX radar, NEXRAD, etc.)" With this technology they can cause droughts, hot or cold temperatures, guide
hurricanes, tornadoes, create fake snow, and create conditions for the many fires taking place all over the world.

just remembered about this: about 25 years ago, I came upon this book: "The holes in the ozone scare" by Maduro and Schauerhammer.

It was a big part of my own "awakening", showing that the CFC scare was a concocted hoax, and showing the (concealed) connection between chemical industries who profited from it, and Greenpeace.
Id recommend it for your library.

it has many parallels to the climate swindle, which is of a much larger scale, here 30 years later.

Oh, and I recommend this as a "101 primer" on the warming swindle, a public program made by channel 4 in 2007. it might soon get scrubbed from youtube:
https://www.youtube.com/watch?v=pIRICfZOvpY&t=2s

Just thought you should know that the image you have tied to your article is photo-shopped. There was never any such cover for Time, and that particular cover is from April 9, 2007 (look it up). The actual text is "The Global Warming Survival Guide". While there were scientists that believed a global ice age was coming in the 1970's, they were in the minority. The media, as the media is wont to do, did run some scare stories about the alleged coming ice age, but it was nowhere close to the scale of the current global "climate change" stores and media coverage. Having said all that, I tend to agree that this current "scare" is for corporate profits and a way to herd the sheep, so I'm not disputing the article itself. Just figuring you might want to avoid discrediting the whole thing by using a photo-shopped fake magazine cover at the top of the article.

The Newsweek article below was not photoshopped.
I don't have time to research your claim but the cover conveys the message of the article which is accurate.

Ill add a few comments on the global warming, renamed climate change hoax article (I did massive research on it this winter, its a bunch of crap)

400.000 and 800.000 years of ice core data, show that temperature drives CO2, not the other way around. The warming releases CO2 from the oceans with a lag of many hundred years.

CO2 is the best part of our pollution problems, as the rise in CO2 caused by burning of fossil fuels, has made CO2 go from about 250 ppm to about 400 ppm.

That might have a slight warming effect, but the effect on plant growth has made the whole planet so much greener, that it corresponds to two areas the size of north amerika!

The sun drives climate change, and some solar experts think the sun is going into a cool phase now. Thats very likely.

The hidden sinister agenda behind this bullshit, is further control, theft, and 90% population reduction.

Hi Henry! Cold enough for you? I'd love to see global warming, I mean climate change. The climate always changes....

The 24/7 spraying of chemtrails also blocks the sun which creates cold weather, like the volcano on the island of Krakatau suspected of causing a mini ice age hundreds of years ago. Any time it seems like things are going to warm up, I notice increasing planes spraying toxic plumes all over the place. The mosses and lichens might be indicative of either the acidifying of the soil or the increased cloud cover of the chemtrail spraying and blocking of the sun. https://wordpress.com/post/chemtrailssuck.wordpress.com/118

I remember years ago watching the boob tube and there was a commercial for some sort of alcoholic beverage (in the freezer section) claiming that scientists say the world is getting warmer, better get some cool drinks!

Maybe they realized that if they make it warmer, people can grow more stuff and spend less on electricity and heating their homes.
They're all so stupid they can't even make up their lies good.