"Get Out" 's Jordan Peele Has Produced More Jewish Propaganda 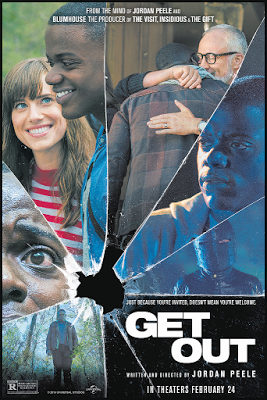 ( Movie tagline:  "Just because you're invited, doesn't mean you're welcome.")
Uncle Tom, Jordan Peele, has made a career of advancing the Jewish supremacist agenda by quilting White people into ceding place to Jewish-controlled minorities.  Ironically, his latest movie, a sequel to Candyman, is a "take down of how white society exploits Black artists."
His break-out, "Get Out" was a "comedy horror"  that is not funny. I didn't crack a smile.
As for horror, gasp, it is about whites who steal the souls of virile Black men.
In honor of his latest fellation of Jewish Supremacists, I am re-posting my 2017 review of "Get Out."
from March 26, 2017
by Henry Makow Ph.D
Despite being written and directed by Mad-TV veteran Jordan Peele, "Get Out" is a dreary cliche-ridden horror flick bereft of any humor or satire.
It flogs the tired liberal-Jewish theme of white racism and black entitlement that Jews consider edgy and chic. 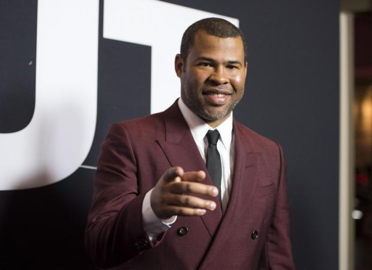 This movie is heralded as Peele's debut as an astute social observer but it really marks his coming out as a modern day Uncle Tom. He will not be the first Negro or goy who sold his soul to Illuminati Jews.
In the month since its release, this movie, which cost "Blumhouse Productions"  $4.5 million to make, has grossed $145 million.   The Jewish hype machine has gone into overdrive. The Rotten Tomatoes critical consensus is 99% favorable; audience consensus is 98%.
Rotten Tomatoes: "Critics Consensus: Funny, scary, and thought-provoking, Get Out seamlessly weaves its trenchant social critiques into a brilliantly effective and entertaining horror/comedy thrill ride."
Here is a sample of the fake news reaction.
""Jordan Peele's Get Out is the satirical horror movie we've been waiting for, a mash-up of Guess Who's Coming to Dinner? and The Stepford Wives that's more fun than either and more illuminating, too." David Edelstein, Vulture
"Blending race-savvy satire with horror to especially potent effect, this bombshell social critique from first-time director Jordan Peele proves positively fearless." Peter Debruge, Variety
"Peele's Get Out is a spectacular horror-comedy masterpiece that you have to see!" Geek Tyrant rating 10/10
BLACKS ARE STILL PERSECUTED AND ENSLAVED BY WHITES
Chris (Daniel Kaluuya) and Rose (Alison Williams) play an interracial couple who visit her parents at their secluded estate for the weekend. 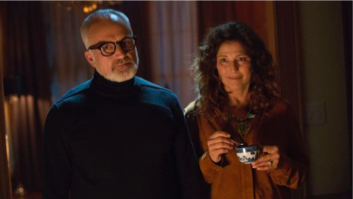 (left, Rose's sinister parents, a hypnotist and neurosurgeon have the skills to harvest black bodies)
But Rose is just bait. They want to harvest Chris's organs. He is one of dozens of fine black men she had seduced.
Yes. The movie is about a cult of white people who occupy the bodies of virile black men and women for their genetic and sexual vitality. They are even referred to as "slaves." This is supposedly a metaphor for the black condition today.
There are no Jews in this predatory cult. Just old exhausted white goyim.
The cult is called "The Family." Have you ever seen the Gentile family portrayed in a positive light by Hollywood in the last 50 years?
Have you ever seen a relaxed, charming, happy goy family?
Kevin MacDonald detailed this undeclared war on Christian society in his book The Culture of Critique.
Who is persecuting whom? Minorities have it so bad in America that Trump built a wall to keep them out.
Despite being outnumbered by whites five to one, blacks commit eight times more crimes against whites than vice-versa.
This movie is not an honest portrayal of race relations. It is scary but not funny or satirical.
THE COMMUNIST STRATEGY
Masonic Judaism is Communism and America is a de facto Communist country based on the Masonic Jewish control of the economy, government, education and mass media.
The Communist strategy has always been to disempower the Gentile "Christian" majority by instilling in them a sense of guilt; and at the same time give minorities a sense of grievance.
At the same time, it degrades the majority by corrupting their religion and culture. The trailers of upcoming movies I saw were uniformly nihilistic, stupid, vulgar and violent.
The US, and the West in general, are satanically possessed. The finger of guilt points to organized Judaism and Freemasonry in all their myriad forms.
Donald Trump has said the media is the enemy of the American people. He'll have to extend that to include many more entities, including possibly himself.
If he has indeed deceived his supporters, as in the case of the gratuitous military build-up, they will abandon him in droves. The liberals will eat him alive.
This movie is oddly appropriate. Except it is not whites who have occupied blacks.
Masonic Jews have hypnotized the goyim, who are helpless to resist.
-----
Related:
Trailer for "Get Out"
Does Hollywood Airbrush Jews and Gays?
Hollywood Hypes Minorities to Dispossess Majority
Hollywood's Sabbatean Sex Propaganda
First Comment from Pam:
This movie smacks of misdirection from the rampant real crime of Jews harvesting organs from blacks in Haiti (with Jew-owned Carnival Cruises running special 'organ transplant cruises' to a port in Haiti near clinic in middle of nowhere that Clinton Foundation helped build) and from blacks in major US cities and of course from Palestineans as Dr Hiss reports. It is not white Christian families but a worldwide web of goons. George Webb's Youtube series uncovers this vast network of organ harvesting, https://www.youtube.com/watch?v=e7YJWLXxO5Q
He explains 'black washing' of truth by (Jew-run) hollyweird that loves making fictional movies of crimes that are really being perpetrated by the Jewish power brokers and their pawns. Thus any would be whistle blower of these real crimes will now  seem like a fool who thinks fantasy world of film is real.Webb is a Zionist Jew who hopes his kids can fight on IDL one day but he has uncovered many links to pedo and organ trafficking. Frank Giustra's Lionsgate made the Hostel horror flick series that depicts the abduction and torture of young white women using plot based on actual events. Sicko perverts defy comprehension by anyone not a psychopath.
Dr Yehuda Hiss of Israel who harvested without permission untold thousands of cornea and skin grafts from dead Palestinians for transplant to live patients says Israel is grand central for organ harvesting with tentacles around the world. He blew the whistle on Israeli doctors targeting and torturing specific Palestinians for their organs. This led to the attempt by UK and Canadian universities to ban Israeli university profs from their campuses and from research teams. http://www.globalresearch.ca/british-doctors-accuse-israel-of-medical-torture/5502989
Obama's and now Rahm Emmanuel's Chicago (remember Hilary also spawned in Chicago of a mafia don) is harvesting hearts, kidneys etc from young blacks in Chicago with the outrageous two a day death toll. HEAD SHOTS are prevalent (statistically improbable, indicative of pro hitmen sniper use) to avoid harm of those coveted black market kidney liver and heart organs.Just in time service for Chinese and elite buyers is for sale. https://www.theguardian.com/us-news/homan-square
The Mossadi arabian credo is to wage war by deception. Going to their movies is opening yourself to their brand of satanic distortion so caveat emptor.

Henry, I don't like Trump as a man but it is wrong to accuse him of deceit in the military buildup as he made no bones at all during his campaign about wanting to flesh out both the military and homeland security with even more fire power. In fact, that's one of the reasons I kept posting that he was also a Rothschild puppet, making any vote worthless. I kept reminding people - and still remind them - that the military and "homeland security" are the two entities which will be in charge of enforcing martial law. For decades it has been revealed that "when we put Hillary in she will establish martial law." Why would not the other owned puppet do so when pizzagate forced the cabal to dump Hillary (who at first was being given another fake "landslide" by the lying media)?

Trump promised to relax tensions with Russia. He has not.

Leave it to the satanic cabal in Hollywood to lead the way in promoting social injustice aka "racially divisive propaganda" for profit. White people are the new bad guy in Hollyweird. The race bait agenda continues with the pairing of Harvey Weinstein and Jay-Z, as they announced this week that they are making a film about Trayvon Martin. I guess all the planned and staged social unrest and mayhem which was brought about over the shooting of Martin wasn't enough; now the masses get to re-live it all over again in movie theaters world wide.