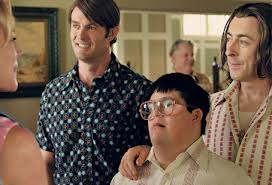 Agit-prop : propaganda; especially : political propaganda promulgated chiefly in literature, drama, music, or art. Communist vernacular.
(left, scene from "Any Day Now")
Two new films confirm that "entertainment" is aimed at disparaging white, heterosexual Christian society.
Made by Illuminati Jews, the message is that they will decide what marriage and family is.  Satan's Little Helpers normalize what is perverse.
Inverting the natural and spiritual order has been the mission of Cabalist  (Masonic) Jews throughout the ages, and one major cause of anti-Semitism from which non-Cabalist Jews have suffered.
"We will undermine every collective identity except our own." Protocols of Zion  -- (Collective identity = race, religion, nation & family.) 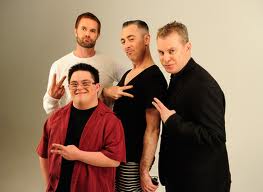 (Actors & director, Travis Fine,right, make an Masonic hand sign. The meaning of sideways V is unclear.)
"Any Day Now" (opened Dec 14) see Trailer
Two gay men, one a cross dresser, try to adopt a Downs Syndrome teenager no one else wants. Homophobes object and are defeated. No one can decide what a family is.
Director : Travis Fine    Writer: Travis Fine and George Bloom
Rotten Tomatoes - Critics 91% Liked It    Audience 77%
Inspired by a true story and touching on legal and social issues that are more relevant now than ever, ANY DAY NOW tells a story of love, acceptance, and creating your own family. In the late 1970s, when Marco (Isaac Leyva), a teenager with down syndrome who's been abandoned by his mother, is taken in by committed couple Rudy (Alan Cumming) and Paul (Garret Dillahunt), he finds in them the family he's never had.
However, when their unconventional living arrangement is discovered by the authorities, Rudy and Paul must fight a biased legal system to adopt the child they have come to love as their own. (c) Music Box Films
"An outraged, unblinking depiction of institutionalized homophobia three decades ago, when the prevailing court opinion in adoption cases was that exposing a child to a homosexual environment was harmful."          -- Stephen Holden NYTimes

25% of children raised by gay "fathers" are sexually abused.   If this boy was sexually abused, do you think they'd depict it? Of course not. These Illuminati Jewish productions always sugarcoat homosexuality. How many people act selflessly? Think Jerry Sandusky.
Furthermore heterosexual children need heterosexual role models. Gay parenting is child abuse, plain and simple,
"Q: What Jewish values do you perceive in the film?
TRAVIS FINE: The sense of ethical mitzvot. When Rudy sees that child he has two choices; he can either help or not. And he does the right thing."
God. Spare us any more of their good deeds! 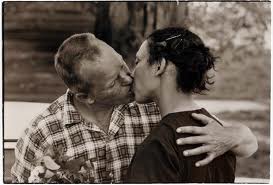 The Loving Story (Dec 10)
HBO Films Written & Directed by Nancy Buirski
Rotten Tomatoes %100  Audience %84
This Oscar-shortlisted film is the definitive account of the landmark 1967 Supreme Court decision that legalized interracial marriage: Loving v. Virginia.
Married in Washington, D.C. on June 2, 1958, Richard Loving and Mildred Jeter returned home to Virginia where their marriage was declared illegal-he was white, and she was black and Native American. Hope Ryden's luminous, newly discovered home movie footage of the Lovings and their feisty young lawyers and rare photography by Grey Villet are stitched together in the debut feature by Full Frame Documentary Film Festival founder Nancy Buirski in a film that takes viewers behind the scenes of a pair of unlikely civil rights pioneers and their real-life love story.
"Brilliant debut film about a landmark case on miscegenation, reminiscent in many ways of the struggle for gay marriage today"      -- Louis Proyect
"We will undermine every collective identity except our own." Protocols of Zion
Editor's Note - I do not object to interracial marriage when it is based on love, and not a long-term totalitarian agenda. Unlike the Illuminati, I love other races and don't want them to disappear as will happen if miscegenation continues to be promoted.
------
Related:  Scotiabank Prepares Whites for Minority Status
Makow- Henry Blodgett asked "Why Do People Hate Jews?"
Makow - Even Gays say: This Gay Behavior is Sick
------------ I Wasn't Born Gay & Didn't Choose It

He was very hateful and I remember reading an article a bit later where he
said "why should I have to listen to what stupid straight people
tell me to do," in regards to gay "marriage." I read the article
because I recognized him from the meeting.

He has been in many films and theater plays, and I noticed when I was in NYC he is very active in anti-"bullying" communist agenda. I just think it is
interesting that this individual might be posturing to look like
just and actor trying to play roles, but he is very active in all
the totalitarian homosexual movements, and is openly hateful about it. The folks in the others areas of the country never see the real lives and activities of the famous people.

However, in NYC of LA, if one is around the entertainment and media scene as I was, you will see a whole different side of the "famous." It is like the rest of country is presented a mirage, while in NYC and LA they don't even hide their perversion and hate.

udging by the trailer, this film is an insidious agent trying to portray homosexuals as kind, loving and caring people and that they should be accepted as part of normal society in which couples (in this case a homosexual "couple") can be caring parents raising children.

In this instance the "child" has a disability and provides the additional emotional stimulus to achieve the effect. A child raised within the context of this repugnant concept, i.e. a homosexual "marriage", has only a minute possibility of development into a normal heterosexual human being.

Whether it is based on a true story or not changes nothing as it is unfortunately likely to receive wide distribution based on the response of "critics" and it will have the desired effect of its Director.